Today, I decided it was time to take up a delayed plan for some rebellion games (see http://gameofmonth.blogspot.ca/2010/08/revolution-campaign-history-to-fiction.html ) Rather than wait till I have enough specially made figures done up, I decided to comb my F&IW, AWI, 1812 and Atlantican militia to get enough civilian rebel figures for a game. As I sorted them, I realized that despite the differences in figure style and dress, what really stood out was the difference between the flocked bases and the bright green bases. Since I was in the middle of rebasing all of the figures I had foolishly multi-based for the game at Huzzah, it seemed a good time to sit and think about the whole bright green base question. 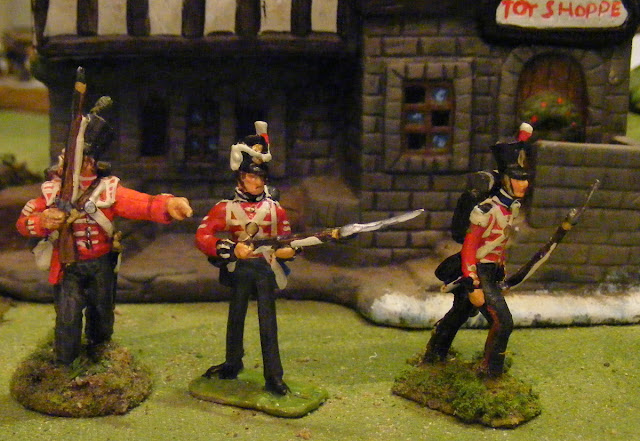 S&S  mounted on washer , Scruby  on  natural base. Zinnbrigade on flex steel base

I've been shading , matte varnishing, basing and flocking wargame figures since the mid-70's so when I started painting recast Britain's toy soldiers in the late 90's, I just treated them the same as any other wargame figure. It was a few years later that I began to appreciate simpler glossy figures as an option.Toy Soldiers and OS figures are  not only shiny; they also have plain green bases so I started to experiment with those too.

The bright green bases have a certain charm and appeal, they look good on an OSW style painted green table and on my current green cloth and definitely say "OS/Toy Solider". My current sand and flock bases, such as my 1812 figures are on, are familiar and thus comfortable and fit my old cloth well but are a bit dark for the new one, something a quick lick of paint can fix.  Since my Atlantica figures and 1/2 my 1812 figures are painted green and the rest of the 1812 are flocked and I tend to borrow units back and forth, it would seem to make sense to have them all the same despite differences in sculpting style. Some of the flocked 1812 figures, especially Indians and Quebec militia,  also get used for AWI & F&IW games with other people so I don't want to change them. So the question is "Am I keen enough on the OS/toy soldier bright green base look to be willing to replace all my old 1812 figures?"

At one point I had wondered if having figures that looked more like toy soldiers or even OS wargame figures would make it easier to worry less about constant scale and all the rest. I can now say, "No, it doesn't". Glossy and green or shaded and flocked, I'm happy to knock 'em over and tell lies about what they were thinking during the game but that's about it, doesn't affect my approach to the game or rules in the slightest. So, I've been busy flocking!

I guess my OS/toy soldiers don't have green bases after all but at least I can once again draw from all of my 1812 and Atlantica figures and have them work together.

Tomorrow I'm going to see about cobbling together some pikemen and working on names, places and a back story for a series of rebellion games and on Monday, Labour Day in Canada, I play.