A short while later 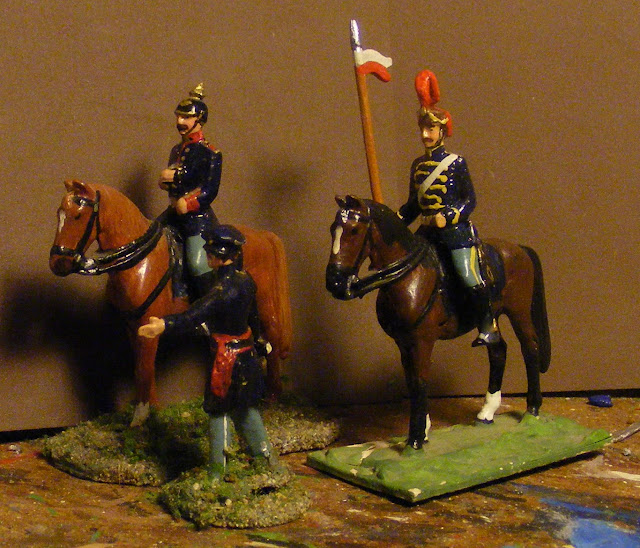 The commander of the Blue Guard discuss some important matter with General Scott's aide while a trooper of the newly raised Republican Lancers does escort duty on a borrowed horse.

To my great surprise I found time today to paint up the sample figures. With once last wistful thought about red pants I settled in to paint the Guard Lancer in the dark & light blue worn by Oberhilse's other existing guard regiment, the artillery and the Dragoons. Three quarters of the way through I was quite happy with the result but hauled out some figures for comparisons. ARGGHH!  I had grabbed the wrong dark blue so now not only was my new Guard the only one in full dress but he had a rather purple-y  shade of blue tunic. I could hear the derogatory "purple belly" comments so set about to find the usual midnight blue and the result was just right. Just the right amount of pomp and lace for a Republic and he fits right into the existing army. 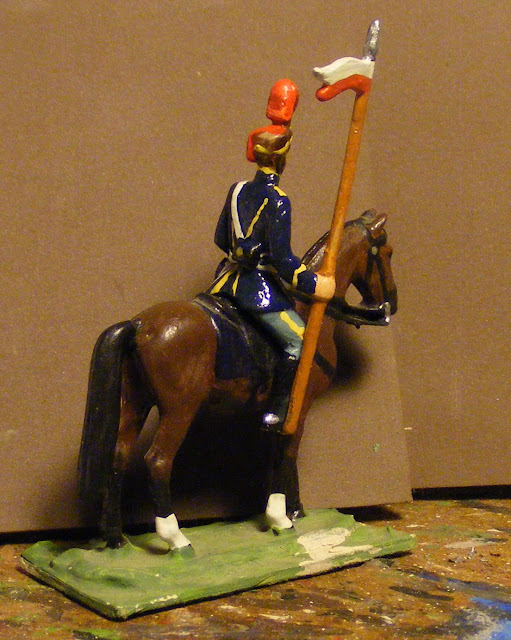 The same from the rear.

This "Imagin-nation" Atlantica business is not where I started out for these 40mm Toy Soldiers.  The original idea started out almost 10 years ago as a 'what if' Schlieswig-Holstein War with Britain and Russia supporting the Danes. It floundered in large part due to some un-toylike fussing about details like the Zinnbrigade 1900 Prussians having helmets that were too small and pants that were too tight.
I shelved it and started in on the Carlist Wars using the Zinnbrigade Napoleonic French as Spanish (the origin of the San Carlos Grenadiers). Having discovered Scruby 40mm ACW  I had bought some for conversion to Danes in the new field uniform but these were now surplus. Another long delayed project was the Indian Mutiny and on a whim I converted a few of the Scrubies Indian Mutiny British.  The thought of doing  all those Carlists and Mutineers from scratch not to mention painting so many figures that had only one plausible setting led me to scratch both of these projects. Since I also had a 40mm 1812 project, I began to consider making some use of its figures and terrain for an alternate history setting starting with US involvement in the Canadian Rebellions of 1837/38 and the so called Aroostock War and ending with the Oregon Crisis going hot followed by an Anglo-Mexican vs US war in California and the Pacific North West. This fit pretty much everyone in with a few detail changes and a bit of imagination and I still like the idea but I kept tripping over the real history. Hence the resurrection of an old completely fictional 54mm project Oberhilse and Faraway. This is now the Atlantican Wars, an attempt to rope all sorts of  lose ends together into 1 project that I can sink another 10 years into without taking up too much money and shelf space..

The original generic plan, stretching back to the late 90's called for 2 "European" armies, a Europeanized native army as well as a spear armed one and a "European" rebel army. Somehow I have gotten a bit lost as I have "gotten into" the fictional history and have accidental been contemplating something like 7 or 8 fictional armies set in various parts of Atlantica for what was supposed to be a compact affair where most troops had multiple uses. I persevered for the last two years because I planned to run an Aroostock game at a convention. That's done and I have no hankering to do it again so I can move on. Hence the re-think. 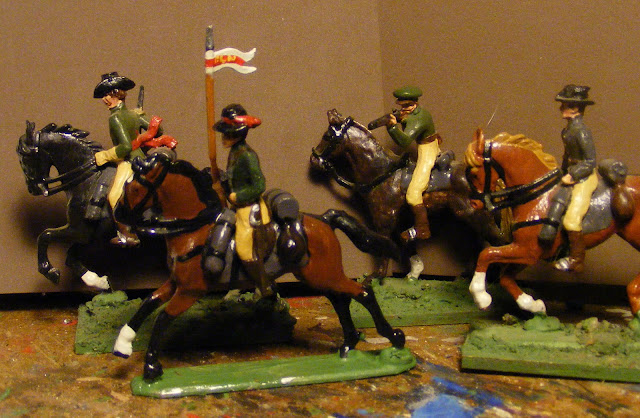 The Frontier Light Horse (FLH) gallops past in their usual style with their new Guidon.

If I can I intend to restrict Oberhilse forces to the area south of the mountains. They were originally supposed to be of Danish origin, not American clones and I am going to follow up on an earlier resolution to soften the US-Mexican war look which tempts me to work on two more historical armies when I am supposed to be reducing and focusing. I still haven't decided how to do this but perhaps the addition of more non-Mexican War units will be sufficient without revisiting existing figures. At the same time I am going to proceed with a jump from the 1840's to the 1860's. Earlier Faraway conflicts may be revisited by calling on my 1812 & 1837 figures with less conflict of interest and duplication between historical and fictional collections.

The various Native forces will be amalgamated for wargame purposes and the  idea of a native regular army will be dropped although the  Irregulars will be beefed up by limited regular support, think Mahrattas, later Afghans or the Khaliffa's army rather than Sikhs or Mexicans.  The aim will be to use Oberhilse and Faraway for conventional games and Farway vs Atlanticans for asymmetrical Colonial games. 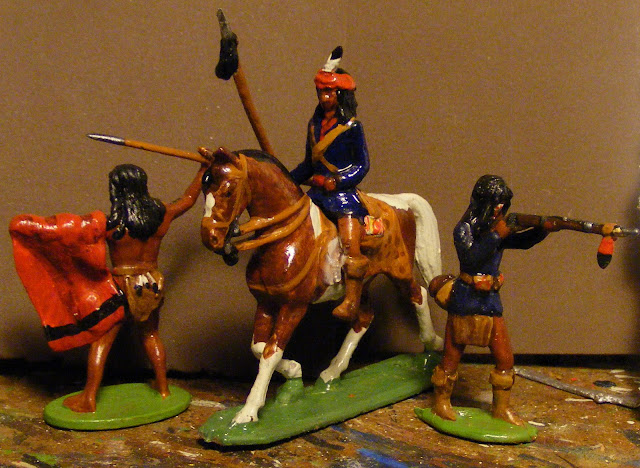 Last but not least a painted pony in almost every sense. I should probably have chosen a different shirt colour for the new rider but it'll all even out.


Now to revisit OB's, re-identify deficiencies and get back to casting and painting.