With Christmas out of the way, I've finally cleared my table and played my first 40mm game since October. A chance to get out some of my favorite toy soldiers, a chance to try the new Universal Hearts of Tin and a chance to try the smaller units and shorter movement and ranges. Actually, it turns out that after some pretty radical proposals were partially tested I've ended up with some serious formatting changes and rather minor rule changes from the Cobb's Farm ACW game. More on the rules in the next day or so. The current draft is posted but there is a lot of work to do, checking for consistency, shifting things to the new layout/format, adding charts and period rules etc. The game below was actually played out of my head.  I'll announce when I consider them done once again but anyone is free to browse if curious. 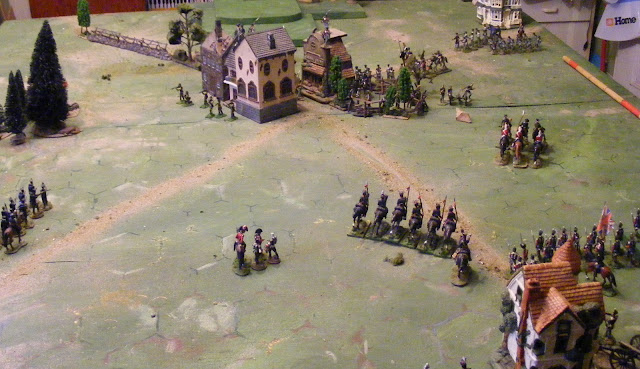 In order to test the feel of the slightly reduced game (about 2/3) I wanted a scenario that would not fill the table but which would allow a goodly portion of the table to be used. A meeting engagement seemed the thing but I figured it was time for something other than Sawmill Village. Flipping through a couple of books, my eye fell on  Crossroads from Programmed Scenarios. Yes, the one Jeff used for the first battle in his Alpian campaign that I have been enjoying taking part in. I figured, alternate choice of maps, different era, away we go.  Both sides had 4 infantry, 2 light infantry, 2 cavalry and 1 artillery unit, totalling 12 infantry, 4 light infantry, 4 cavalry and 2 artillery "companies" or 22 in all. The infantry companies are 4 strong, the others 3 strong. Since I was using single figures, I used 1 for each strength point, if using  my 1/72nd ACW I would have just tracked hits with each stand being a "company". The Break Point or Army Morale level for both armies was 12 companies lost and game length was set to 20 turns.

Faraway (Red) rolled an approach on 2 roads and rolled an arrival time of turn 6 for both columns. They ended up with Larsen's Lancers, the Victoria Rifles, the Dover Fusiliers and General Turner coming in on the left and GGDG, Royal & Uniake Fusiliers and artillery on the right. Oberhilse rolled an arrival on 1 road on turn 3. Given that the table layout rolled up placed the crossroads slightly closer to them, they had no problem occupying the town before Faraway was even on the table. 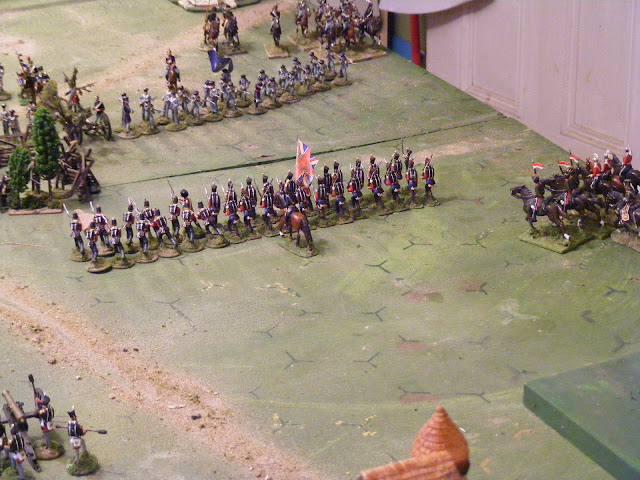 After some preliminary scuffling by the cavalry in which the DGBG showed the Lancers how to take hits instead of giving them, the armies deployed and the Generals settled on their plans.

General Turner decided to screen the town and bombard it while sending his cavalry and the bulk of his infantry  to the right to cut off the town and force Blue to counter attack or accept a draw. A small force was sent left to circle the town from that direction. General Scott decided to hunker down and only counter attack where essential. He did, however, send the Green Mountain boys out on the right to  . skirmish with the Victoria Rifles. 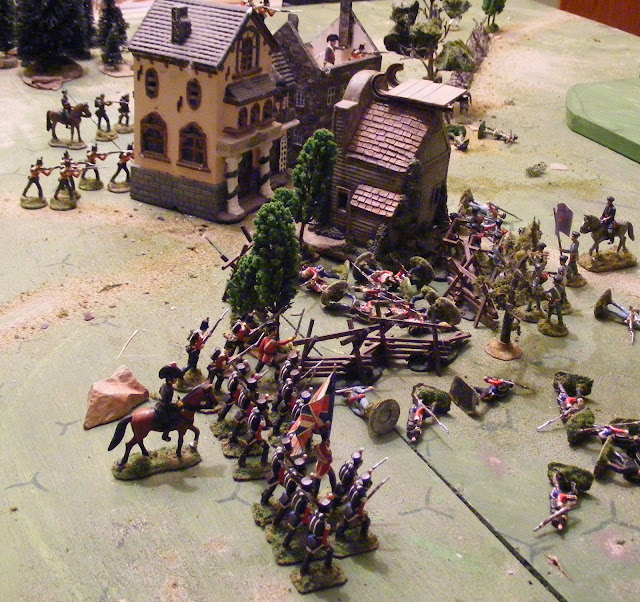 Repulsed!
The attack on the right didn't go so well. After letting the Bangor Rifles get away and sucking up some artillery fire, the red line rolled forward against the artillery and Oberhilse 2nd & 3rd Infantry. The artillery was driven back and almost destroyed but the Blue Infantry under Brigadier Zinn gave their Red counterparts a bloody nose.  The Uniake Fusiliers nearly captured the General Store but the whole Brigade was forced to retire or face destruction. At this point, it was about turn 17 and  Red had lost  8 companies to Blue's 3. The fat lady wasn't actually singing yet so Turner pulled back his line and sent in the Dover Fusiliers. With his army scattered and many companies badly shot up, Scott was unable to respond. By the start of Turn 20 Red held the Hotel and Stone House and both sides stood at 8 companies lost. Neck or nothing Scott sent his two remaining cavalry squadrons in against the Royals, upping the bodycount against Blue but not changing the result.. . 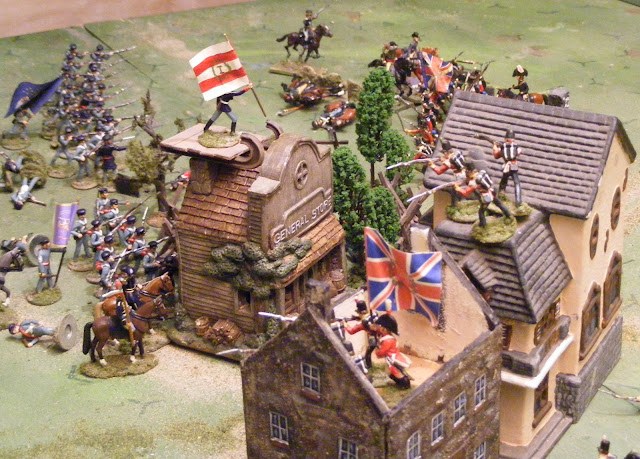 Red faces Blue across the street as the light begins to dim and the fighting dies down.

An encouraging game on all fronts. I liked the way the game fit the table, the flow of the game, how the rules worked given the tactics adopted and I liked the amended command control system. I was also strongly reminded of the HofT games in 2009 that had me putting all my other rules away. There is a strong temptation to reinforce and play again but I need to test the small board and I need to test the ancient/medieval version so the plan is to change the scenery  and troops and relocate to the Three Kingdoms 2,000 year ago.