There's nothing like a few  hours of highway driving in light traffic and good weather for growing good, small, ideas into monsters. Last Sunday I was thinking about a small project to let me use some existing toy soldiers  and unpainted castings, this morning I found myself confirming that between existing figures, molds and Dorset Toy Soldiers that I could build everything I would need for several campaigns and found myself double checking unit sizes in Big Wars and wondering if I should be planning armies so that two portable units made a big wars unit. It took finding the unpainted RHA limber horses bought nearly 15 years ago, a good head shake and grabbing a few 40's off the shelf to bring me back to reality. (The RHA limber would stretch about a foot once assembled, a little big for a 30" wide board.....)

Ivan, my first born. The first figure that I sculpted and cast from scratch. I only painted one since the 54mm Crimean project went on hold but it would be easy if dangerous to spit out 3 dozen.

One problem of course is that HG Wells and most boys of the day used what they had and didn't bother worrying about things like which ACW figures could be converted to Russo-Turkish War Russians  or whether or not Guards in Bearskins and tunics should be seen fighting enemies in Khaki or Crimean Era Russians whereas I'm still fighting decades of conditioning that games should at least have historical uniforms and plausible opponents. It didn't take long, especially after I once again started to browse Dorset's seductive lists, for this expanding idea of resurrecting 54mm armies to start duplicating campaigns I have in mind for my 40mm Faraway and Oberhilse armies. It never takes long to remind myself why I downsized but it seems that I do need reminding now and then. After all, I didn't stop because I couldn't get what I want or that I stopped wanting it, I merely recognized that I couldn't do everything and that slightly smaller fit my space better.

So, I have decided to clamp down on the sudden revival of the idea of adding a few hundred 54mm Toy Soldier armies, have reaffirmed my intention to refurbish existing figures and add as few new ones as possible to make a small Red vs Blue set up. To avoid serious thought about Crimean, Russo-Turkish, Plains War US or Boer War 54mm armies right now, I will stick to Red vs Blue using largely if not entirely British forces for both sides. (for now...)


Cavalry units will be 2 figures, infantry 4. I would prefer 3 and 6 but while they just fit, it is too crowded especially if there is any terrain, and there is no room for an attached commander.

In the mean time, I have become increasingly unsure how often I will be able to play upstairs so I have decided to back down from my decision to try to keep card table and full table armies separate and will try a small 40mm Faraway and Oberhilse card table game this weekend before they fade from my mind. 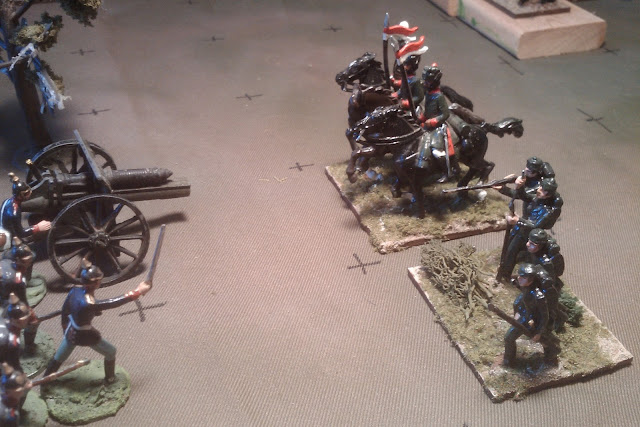