Variations on a theme 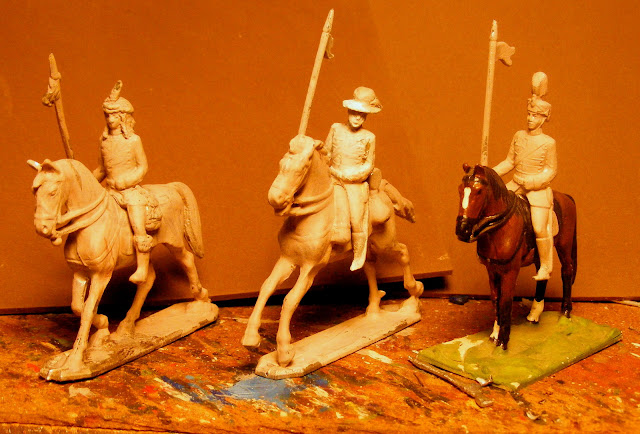 Winter is fast approaching and with it, guilt free hobby time! Yesterday I found time to dig out some lancer castings done early last summer and get a start on them. The basic figure is a Zinnbrigade 1900 Prussian Hussar with lance. This is the same figure that I used for Larsens's Lancers. I have various ideas for them but would also like to do some straight out of the box, errr, well, mold. This lot was supposed to be all Atlanticans but since I've been waffling so heavily on the period, setting, style of warfare, unit sizes etc, not to mention uniforms and native costume, and since time is still short, I opted for a couple of samples.

The first is a native lancer on the hussar horse with big shabraque and no saddle or gear. The conflict here was between doing him in a civilized Mexican irregular lancer style or a more Apache-esque manner. I decided that the latter was more needed right now. About 1/2 of the pile of castings were crisp, the rest  were not good with loss of details and almost no face. I used some of these for the 2 conversions. trimming the hat on this one and adding hair, turban or head scarf and a new nose as well as the minimum required to turn the tunic to a cotton shirt.

The 2nd figure was not planned, apparently the Frontier Light Horse is adding a lancer squadron. It all started because I thought the Hussar might look good in braided  green jacket and  red pants, which then reminded me of a picture of a US Mexican Spy Company lancer in green and buff which in turn reminded me of my Frontier light horse, at least those in uniforms of some sort. The horse is one of my favorite range, the multi-pose charging British Dragoon horses. Anyway, I filed the tunic down to a stable jacket, swapped his head with one of my sailors, built the crown up a bit and added a feather. If I do more I will have to do some with open jacket's leggings, etc.  Doing militia lancers in chaps, ponchos and tall broad brimmed hats is going to be a fair amount of work  and I might be better off starting with the Napoleonic dragoon figure. This chap was easy enough though and will blend in with the Light Horse, although whether I have space in my Oberhilse OB for irregular lancers or whether he becomes just becomes a squadron guidon bearer remains to be seen. It depends in part on whether I go for 6, 10 or 12 man squadrons.

The last figure is cast as sold. I am finding opposing pulls between assembling these armies as consistent, planned armies much like I would if they were historical or trying to make it look like I assembled them like a collector of painted toy soldiers 100 years ago might have, assembling two armies by buying what I could find on the shelves in the store. (* A store that stocked every set that Britain's offered that is.)  A quick look through what was available provides plenty of inspiration. The urge was strong here  to go with one of the 1900 Prussian Hussar uniforms, the red coat being especially attractive for some reason but Faraway already has a unit of lancers and I want to avoid the red/blue battle report mix up issue where possible. Black tunics are still under consideration but I cast my net wider. Light blue with red pants was considered but rejected as too gaudy for Oberhilse. Green with red pants like Belgian Guides is still a possibility but I am leaning heavily towards a traditional Oberhilse look of dark blue tunic with yellow or red trim and light blue pants. I don't intend to do a whole unit of full dress dandies but will assign the Guard Lancers as an escort to the General.  It seemed obvious that he should go on the intended horse but the Generals he might escort are almost all on standing horses so I thought it best if the escort waits patiently instead of trotting off. I'll have to cast some up and maybe add some blanket rolls and the like.