A little bit of deja vue. I'm setting off tomorrow to visit family and wish my mother a happy 92nd birthday. Just before going I've been trying to figure out whether or not I could fit my old Britain's onto my new card table gridded board for a stylized game. I suddenly remembered thinking about a Boer War Batttlecry game, looked up the post and found that it was 6 months ago, just before heading off to visit my sister on her birthday. 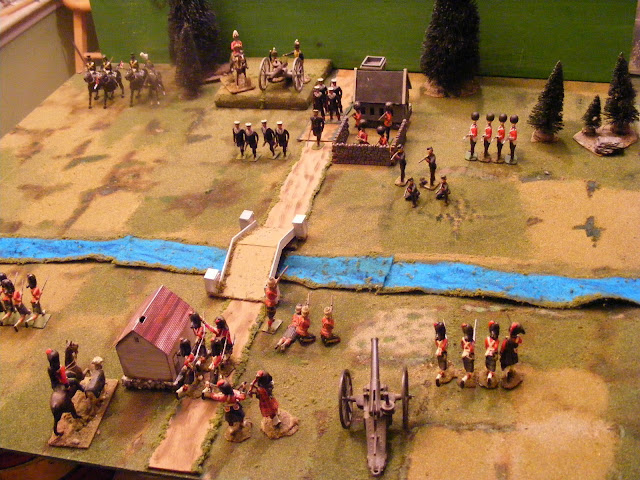 Toy Soldiers trying on the new board for size.

The urge towards Victorian British wargame figures, especially but not exclusively Colonial ones,  is deep seated in  me. In the days before I read Featherstone, Henry Harris had me converting my old toy soldiers into models and in addition to the few reference books I had at home, I used to grab every chance I could get to pop into the Black Watch of Canada museum during my army cadet days and make notes on uniforms to reproduce at home. Most of my military history books also centered on the British Army   No doubt due to my Mother's father's influence. Having Little Wars as my 2nd book on wargaming probably didn't help.

Picture lifted from eBay but this is the same one I have upstairs.
I wonder how many wargamers it spawned?

Its much easier to settle in to historical Colonial games if you don't start from a Little Wars/Toy Soldier background as there are no more bearskins and feather bonnets in the field by the 1860's, precious little pipeclay and too much asynchronous warfare. My 25mm and 54mm plastic Colonials were done in  more or less historical fashion even though often used in fictional games but my Britain's Toy Soldiers tend to stay true to their toy soldier heritage. I originally envisaged hundreds of toy soldiers marching across wide fields but hopefully that toy heritage, the illustrations of Morschauser's Britains marching across a grid as well as the memory of my Portable Wargame refight of Hook's Farm will allow me to accept and enjoy a fairly stylized game on a small grid. the idea being to keep the numbers and commitment of time and resources to a minimum. 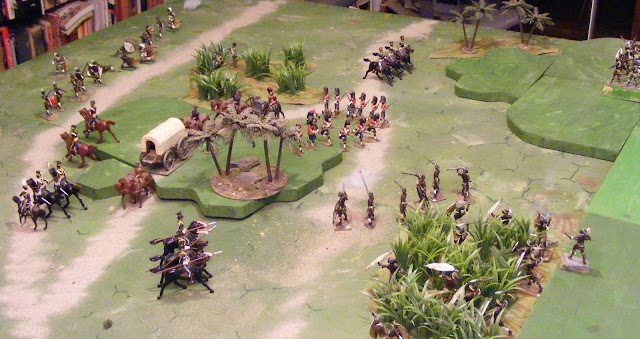 
My first instinct was to bring out the Nku  Khu again or break out my remaining Arabs but the board is too green for Arabs to be completely comfortable and I have an urge touch on the Little Wars aspect. The last two times I did Red vs Blue armies and will probably do that again but given what's ready to go, there is a strong temptation to do the Great Highland Rebellion of 1885 as a test game. If it does work, I want to do some houses that will fit the grid and be just tall enough to pass as toy scenery and hold a unit. If it works I want to make the most of what I have which include vintage highlanders, guards & sailors and Plains Indians, compatible plastic Zulus,  molds for a grenadier, zouave and US ACW troops and odds of sods of cavalry and artillery stretching from the Crimea to WWI. Most of the cavalry is of newer slightly larger style so that will take some thought and work or else money. A standard army will be composed of 8 or maybe 12 cavalry, 2 guns, 40 infantry plus general, brigadiers, a band and some pack animals.


This has been hovering in the background for years  so I am really hoping that it works so that I can organize and finish at least 2 opposing armies this winter.