Cry Battle and Let Loose The Dice of War.

It was just the sort of evening when a card table game was what I needed. My disorganized mass of 20mm ACW troops have been on my mind so it seemed like a good time to try something. All my card table stuff had been packed away with the arrival of the latest litter of Iggies last June but Kathy had taken Vinnie,  the last of them, off  to a dog show along with the puppy pen that has been set up where my table goes so I set up the card table and grabbed the copy of Battlecry that Ron had given me. I substituted existing painted figures and supplemented the wood hexes with a few trees and bushes to make it easier to see them in the dim-ish light. Since I could only fit 1 of my standard bases per hex I needed some sort of casualty markers. Rather than muck about trying to come up with removable command figures or an adequate supply of actual casualty figures, I just used marker dice. 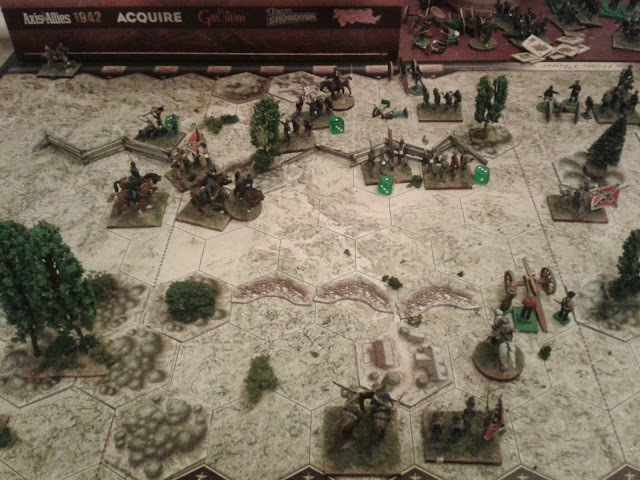 This was the first time I played Battlecry straight out of the box (more or less) and on the actual board and while I knew it was  smaller than the hexgrid we play on I was surprised at just how small the board was. Since I live in a Belmont, I started with the Belmont scenario and was surprised to find troops deployed 2 hexes away from each other. The effect of a surprise attack I suppose but still!  It helped make the short movement allowance make sense but not the generous ranges.

To get around the knowing what the other guy has in his hand, I drew full hands each time. It  lost some of that sense of being able to build a hand but since there were enough cards each time it didn't really stop making and carrying out an attack plan. The battle back card was problematic so I ruled that if your drew one and had a unit that had just been attacked and was still adjacent   then it could be played when drawn before choosing a card for the turn. I found that I didn't enjoy the game as much as I have enjoyed the Colonial adaptations of it that we have played on the bigger table even making allowances for it being solo. The slow movement and long ranges meant that firepower overwhelmed movement and any advance was a creeping forward hoping to drive off or destroy the enemy before you got close. Only the fact that only units that were ordered can fire moderated the casualty rate but it feels wierd to have 2 units staring at each other over  fence with no firing going on. In theory I suppose they are blasting away without effect but it feels odd. I also felt the random nature of the activation more keenly.

It took under an hour to play the game so I reset, put away the cards and tried using activation dice 1 per side with 1 PIP allowing 1 unit or a group of units adjacent to a commander to move. I also reduced the infantry firepower by 1  but let all units in range fire (except artillery that moved). This produced a slightly more enjoyable, more "normal" game but I started thinking about limbering/unlimbering guns, faster moves if not firing.....but luckily it was bed time by then. 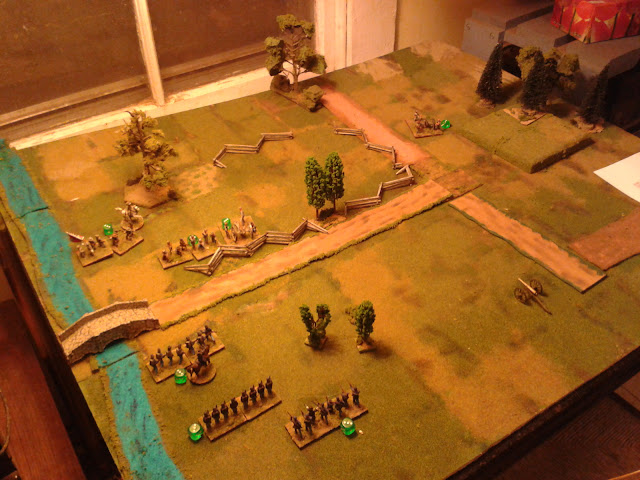 An experimental Square Brigadier game last year with 2 x 40mm stand regiments on a 3" square grid. 2x30mm stands fit better and 12 figure regiments look better than 8. 4 hits per stand is too many though.

The game was definitely enjoyable enough to be repeated in some form again, probably using an improved Square Brigadier. 3" squares or hexes should give me just enough room for some scenery and adequate maneuver room as long as I keep ranges and movement low and I should be able to adapt all of the Battlecry scenarios as a change from generic teasers.

I have been pondering a different level of game to differentiate my 20mm ACW  from the 1860's 40mm toy soldiers that will inevitably include some very ACW looking fellows but I think I will stick with regiments as units, just give them a smaller frontage and minimize casualty tracking. The new recruits received last year came with a lot of 30mm bases and 2 of these fit quite comfortably into a 3" grid and will hold 5-6 figures each depending on poses. Two bases are enough to show a unit as either in march column or deployed in battle line and by keeping the units at 12 figures I can maintain my current organization but with 1/2 the frontage per unit allowing me to field twice as many units in the same space and dropping the ground scale to 1"=50 yds instead of 1"=25. 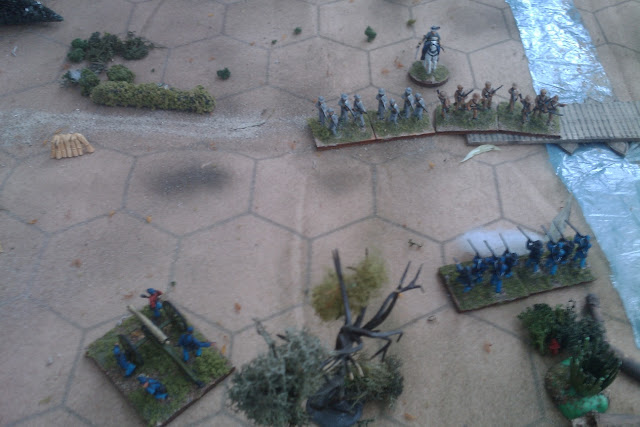 An al fresco Portable ACW game from 2 years ago, experimenting with 2x40mm stand regiments on a 3" hex grid.

This means small divisional sized scenarios as an evening game on the card table or some fairly large all day corps or multi-corps battles on the larger table. I just need the rules to be simple and quick enough to handle 30 or 40 regiments a side in the big  battles. 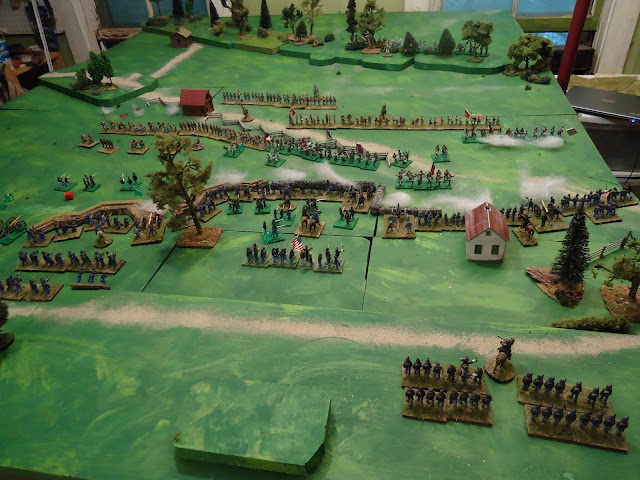 July's Bath tub version of Pickett's charge using about 2/3 of existing forces organized in adhoc 4 stand Brigade units. Picture this with twice the figures on the same frontage with 2 stand regiments as units.