The Battle of Darcrum Moor (Continued)

Not impressed by the Scots display, the English pressed forward to sweep the handful of Scots from the heights so they could press on to recapture the cattle and inflict a punishment that would be remembered for years.

True to fashion, the Scots retreated as the English pressed forward so the Warden sent a troop of his Border Lances galloping forward. As they approached the crest they were surprised by a fierce volley as a forest of pikes suddenly poked up behind the crest and began advancing. The Lancers turned and fled to safer ground. (Sorry, that was supposed to be "prudently pulled back to report as was their duty".)
Despite earlier losses, the English still outnumbered the Scots by 3:2 and their duty to punish the raiders was clear. The pass was too narrow to allow a full deployment so the Warden ordered the English foot to advance on the right while the Germans were to come forward on the left, leaving their shot to hold back the highlanders.

Now the English had bought the best mercenaries that the smallest possible amount of money could buy but with the Italian Wars raging again the pickings had been slim. The "German" pikes pressed forward at the fastest pace that didn't involve rolling higher than a "2" on any of their movement dice. Alas, before they could make their way to the front the Scots had followed up the billmen, shattered their formation and sent the remainder scampering back to England.

The Italian arquebusiers seemed just a bit shy of chasing highlanders into the hills but they did advance and trade fire while the pikes pressed on. Every arquebusier with an arrow in him seemed to be escorted back by two or three comrades though and soon the hill was bare of all but the Highland archers who turned their bows on the pikes.

With Highlanders on one side, cavalry and shot to the front and Scots pike threatening the other flank, the German commander ordered his pikemen to form square. With an eye to the re-emboldened Scots horse and the threat to the flank, the Warden ordered his English archers to fall back and clear "the damned hill" to the flank.

The battle wasn't over yet though. The Warden ordered the Germans to fall back to make room and ordered his lancers to advance and clear off the Scots shot and then the enemy cavalry while the archers drove off the highlanders. The fighting was fierce and the Scots pushed back on both flanks but when Lord Home led his Reivers forward, they once again sent the English flying.
There was one chance left. The fight on the heights to the flank was still raging and if the Warden could just reach the Scottish commander before any more of his troops broke,  the day could still be his. 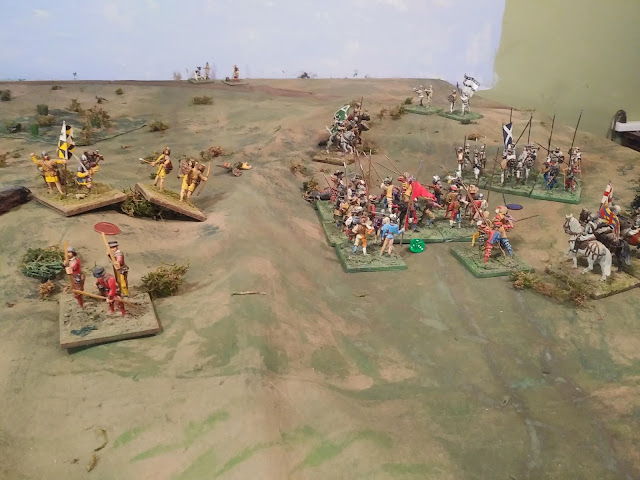 Alas for the English, time ran out when their archers broke and ran. All that could be done was to try and get as many of his levies safely back over the border. At least the Warden wouldn't have to pay the Germans again.
Posted by Ross Mac rmacfa@gmail.com