Digging into some Not Quite History

It seems that while I was distracted by Rosmark's latest war with Schoeffen-Buschhagen, there had been some serious political shifts closer to home. Shifting alliances were not unusual during the Not Quite Seven Years War and in this case it seemed to me that something must have triggered a falling out between the Duchy and the Alliance on one hand and a reconciliation between the Duchy and Rosmark on the other. 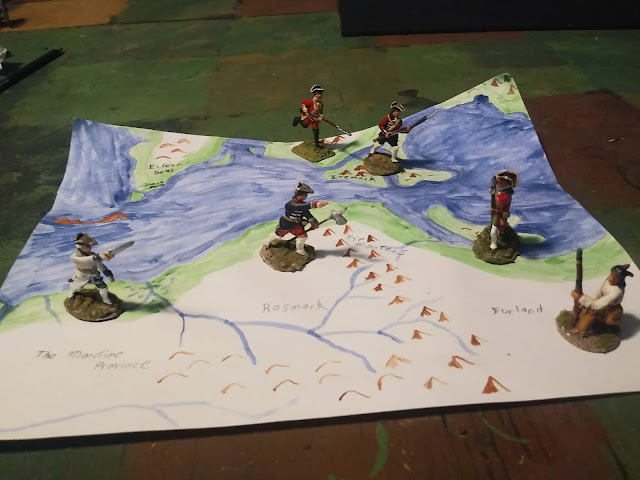 It had been two years earlier that a combined Duchy and Maritime Army last stood together in battle against Rosmark and almost a year since the Dowager's White Coats were last seen at all while the Red coats of the Maritime  troops had continued to battle against Rosish forces.

I decided to dig a little deeper.

The coast of Rosmark is shallow with few natural harbours in which to shelter against the fierce storms that blow in from the north so it had never developed a strong maritime presence. The acquisition by marriage of what became known as the Maritime or Dowry Province to the West gave Rosmark an interest in the coastal trade between the Duchy and the Furland East of the Hye Mountains.

With the outbreak of civil war between the King and the Duchess, that maritime trade was lost to Rosmark and the Rosish merchants of lobbied the King to open a land route to Furland through the mountains, thus threatening the Duchy's trading posts and native relations. The idea appealed to him and he had sent his Frontier Guards over the mountains.


The decision by the Duchy's Council to send companies from the  Irish Regiment to guard their trading posts proved to be an unfortunate one for them.

This regiment had been raised largely from Iremark, an island which was not only a member of the Northern or Maritime Alliance but also much closer to Furland than the Duchy itself. When the soldiers spread stories of the richness of the Eastern lands, the other members of the Alliance began to expand their own trade with Furland to the dismay of Duchy merchants.


With the successful conclusion of his spring campaign against Schoeffen-Buschhagen, the King's eye turned back to the Duchy.  The Dowager, having lost some of the fire of her youth and now subject to the pleas of her subjects to end the expensive war, succumbed and negotiated an agreement with Rosmark. The Duchy would retain its special privileges and laws but would acknowledge King Michael as Regent and as Heir to the Ducal seat.

With his southern and Western borders secure, but the Maritime Alliance showing an ever increasing interest in the Furland trade, King Michael once again turned his eyes to the East.