For a week the tired Maritime army had marched hard in pursuit of the retreating Rosmark forces. It was almost a relief when they approached Grant's Pass and saw the enemy guns posted atop the crest of the narrow pass. 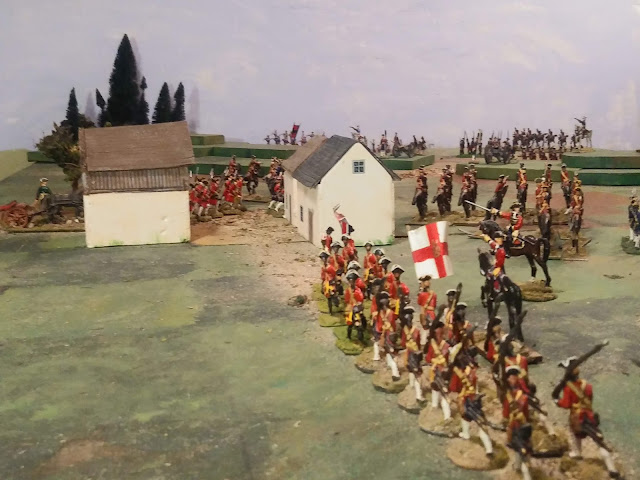 The army had been marching in two columns along parallel roads which converged to run through the pass.  The order went out for the cavalry to deploy and clear the enemy guns off the ridge.

The Light Dragoons, eager to retrieve their reputation after the fight at the Boinne, galloped forward on the right giving the gunners time for a single blast of canister before cutting them down. The heavy cavalrymen of the Council Guards were not as quick and recoiled with heavy losses from the well handled guns on that side. The Naval Battalion and the Grenadiers were then ordered to deploy and hasten to attack the battery before the Rosish infantry could come forward to support the guns.
The gallant but ill advised attempt was met with blast after blast of musketry from  the Queen's Foreign Regiment which had stepped up onto the crest to stand beside the guns as well as canister from the battery itself. The Naval Battalion was cut to pieces and sent reeling back without firing a shot but the Grenadiers stood firm, closed ranks and eventually, the survivors began to return fire. Grenadier after Grenadier fell but they were determined to fight to the last man and never yield an inch.
At last the rest of the infantry arrived and deployed and the line began to advance, muskets blazing. Thick clouds of smoke rolled across the field as neither side showed any inclination to retreat but suddenly the Light Dragoons appeared through the smoke taking the Provincial Regiment by surprise and driving them back. The Council Guards followed their example and drove back the Queen's regiment at great cost while step by step the Red line, a handful of Grenadiers showing the way, advanced pouring volley after volley into the enemy until at last they broke and ran.

Beyond the fleeing Rosish troops could be seen the end of the convoy full of the FTC Governors personal effects, company ledgers and a year's profits as well as the army's  pay chest and supplies. To the victor the spoils!

Never yet had any army given King Michael's soldiers such a sustained drubbing as they suffered in this campaign. Already there was talk of a National Levy of men and money to form an army to take back what had been lost.

Thus ended the Maritime Alliance's first joint campaign.  The scenario was a Holding Action from CS Grant's Scenarios for Wargames, the rules were once again A Gentleman's War. Once again these rules worked well with lots of unexpected bits but nothing untoward and despite all the cards and dice, the player's decisions still felt like they were more important. However, once again trying to keep track of both armies, place markers etc while constantly running (sic)  from  one side of the table to the other to move troops or get back to the card deck,  turned the game into a minor athletic event as well. I don't have an answer for that beyond finding an opponent but its the same thing that was a major factor in my decision to stop playing MacDuff at home.

What next? We'll all of us just have to wait and see!
Posted by Ross Mac rmacfa@gmail.com