Dearg Mor and the Black Bull

The old year was drawing to a close and Sir Gawaine was visiting Old Stones Keep, the holding of Sir Vincent and Lady Johanna. 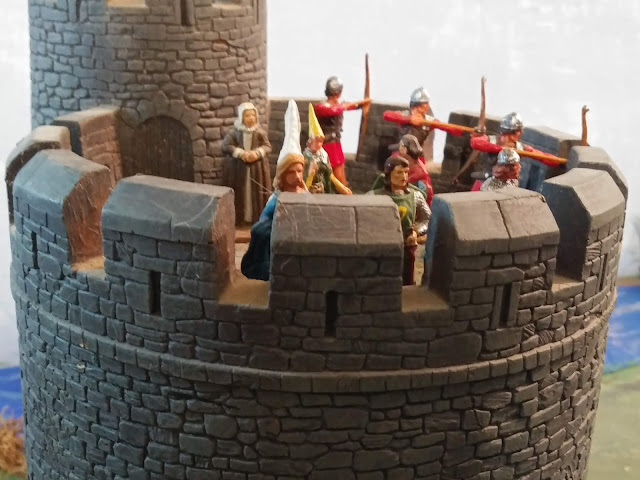 The morning mists were just clearing and the common folk setting about their daily tasks when a horn sounded from a nearby wood. A lilting, almost insulting call, followed by a chorus of battle cries as Dearg Mor (Big Red), burst from the woods with a straggle of Picts at his heels.

"MY BULL!" bellowed Sir Vince, "He's after my Prize BULL!"  "TO HORSE!" "Gawaine, I beg of you to stay and guard the Lady Joan while I teach this barbarian a lesson". With that, the Lord of the Manor clattered down the stairs to arm for battle.

Some of the herdsmen in the field  drove the various groups of cattle back towards safety while others raced to head off the attackers and drive them back. Archers manned the tower and knocked their bows waiting for an enemy rash enough to come in range or try to storm the tower. The men in the village grabbed spear and shield and rushed to drive off the handful of raiders.
As the Picts rode off, Earl Helgin  with a band of Saxon raiders suddenly appeared and marched grimly towards the town. The herdsmen attempted a stand but were quickly scattered. They had bought time for the first of the tower garrison to arrive though.   After two attempts to storm the village and with the sound of galloping hooves heralding the approach of Sir Vincent, Helgin signalled a retreat. Sir Vincent had a beef (sic) with the Pictish Chief though and thundered past Helgin's shieldwall.

Twice Pict and Briton clashed and blood was spilled on both sides, but time had run out, the prize Bull was safely away. Sir Vincent called off the pursuit.

Enough blood had been spilt for one year and the news was not all bad. The value of the Aurochs and cattle that had been saved were as great as that of the Bull and cow that had been stolen. There would be time later for retribution.

Happy New Year to All!
Hope you'll come back in the year ahead!