It is well know that since Kyuquoit signed a trade treaty with Oberhilse more than a decade ago, the Faraway Trading Company has been unable to even have their trade missions received. Now that the Origawn War is over and Faraway's right to exclusive  influence over Northern Atlantica as well as control  of the Origawn Territory has been recognized, the Queen, as a mark of her appreciation of the FTC's efforts in the campaigns against the Brethren of the Coast , has graciously lent the FTC two regiments of infantry and one of Lancers as well as General Milne, as an escort to a new trade delegation.

Upon approaching the Kyuquoit border post it was soon apparent  that they were prepared to resist our intention to cross the border. 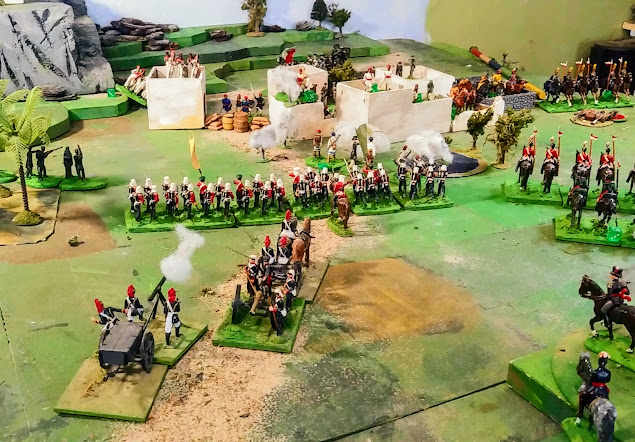 The army deployed with precision and attacked.
General Milne ordered the expedition to deploy and attack in hopes of seizing the town and border post before it could be reinforcemed. It was soon evident that the enemy had had prior knowledge of the expedition though and that reinforcements were already at hand. 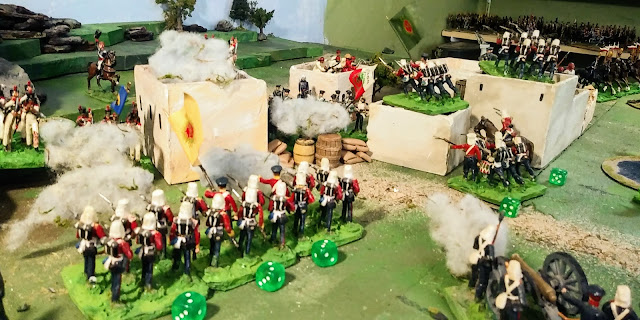 Fighting was fierce and prolonged. General Paz can be seen in the background, urging his men to resist the invaders.
A savage fight ensued and our redcoated infantry suffered  high casualties. The Buffs were forced  to fallback and regroup but the Green Tigers drove the local villagers from their stronghold and held their gains despite a heavy and accurate fire from some Oberhilse volunteers such had been spotted aiding the Black Fox. Many  were still wearing their old uniforms and one has to wonder if these are mercenaries, bitter men or are there with the secret approval  of the Elders of the Oberhilse Council, especially since they were being led by Brigadier Zinn formerly of the Oberhilse Field Force. 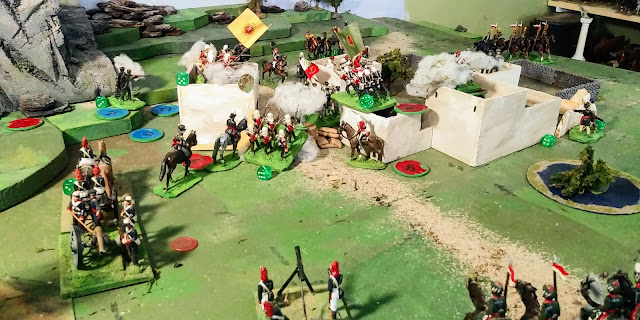 Faraway regimental Colours fly over the Kyuquoit town.
Casualties had been heavy and the enemy was obviously ready and able to resist any attempt to continue to advance but to retreat with so wounded across the wide plains of Kapelle with tribal horsemen  nipping at their heels was not to be considered. General Alfred A. Milne himself led the Buffs in another  assault which cleared the town and the enemy General signalled a retreat.
The army is settling in now  to lick its wounds and prepare to hold this post until supplies and reinforcements arrive, or new orders.