The 6 sides of death

Today's game was Scenario 4 from C. S. Grant's Programmed Scenario book, played out on Ron's hexon tiles and using  the just in time Hex based version of Bob Cordery's Portable Wargame. Ron and I discussed some of the issues with using a set of 19th C rules with our 18thC armies but decided to make an absolute minimum of changes before playing and leave the rest for discussion post game.

The 1st thing we did was to adjust the Combat Power to allow us to field Elite Grenadiers and Heavy cavalry. Since the melee values were already so high, we dropped the value for Line Infantry and Medium cavalry to 4 and left the Grenadiers and Heavies at 5.

The 2nd thing was to add in Light Infantry. We started off copying the native infantry stats, allowing them to move twice and dropping their combat value to one less than regular infantry, in our case, 3. After some discussion we modified this to allowing them an action plus an extra move if a second activation point was played. Thus they could shoot them move or move then shoot or move twice but not shoot twice.

Oh yes and we had one of those DOH! moments when looking at Bob's translation of the arcs from square to hex. We both had an unstated, unquestioned assumption that one could have units face a hex side OR have them face an angle. The thought that one could allow either was one of those obvious better ideas that we had never considered.

So, thus armed we tackled the scenario, dicieng for sides then dicing to choose which army list we would use. For once translation was easy, one  scenario unit was one game unit, simple. Essentially the scenario involved a smaller force try to stop  a larger force from moving up a valley and exiting the table. The victory "specified" that the defender had to inflict significant delay without taking excessive casualties and suggested that the players or GM would have to assess the situation when the game ended. We decided to help ourselves a bit and establish a guideline. If there had been no enemy and I always rolled sufficient activation points,   I calculated that it would take me 10 turns to march a unit across the table by road and 20 turns to march the majority of my force off the far side. From this I suggested that if, after 20 turns, I was not in a position to exit without opposition then that was a serious delay. For excessive casualties we agreed that under these rules, a loss of more than 50% of one's units was excessive.

My force had to be divided into 4 parts, an advance, 2 flank guards and a main body. Each of which might arrive at a different time. As it turned out I rolled the maximum delay on each body. So, I began with 2 units of light infantry and a cavalry unit on table. A turn later one cavalry unit appeared 4 hexes away to the left and right and 5 turns after that my main body finally showed up, 6 infantry, 2 foot artillery guns and my general.
When my advance guard deployed, I could see 4 infantry and 2 guns deployed on a steep hill at the far end of the table, 2 cavalry units on a closer hill with a light infantry unit lurking in some woods and another farther down the table. 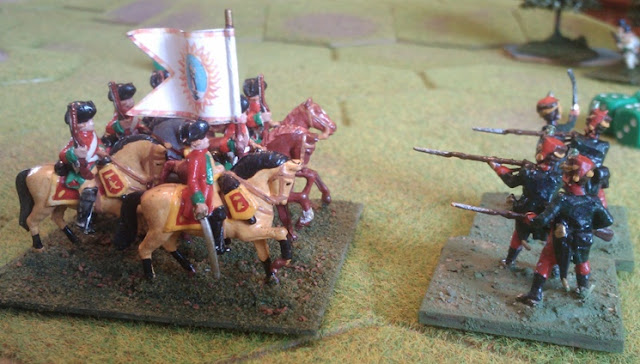 The Voluntaires de St. Croix get to see the elephant, or some Dragoons anyway, then get to go back in the box and have a break.

With no general on table, 1 was rolling 1 die at first then 2. Ron had 5 dice. He used them to swoop down with his cavalry and hit my advance guard hard, arranging 2 on 1 combats until 1 got lucky and took out his horse grenadiers. At last, my main body arrived  and Ron pulled his advance guard back. 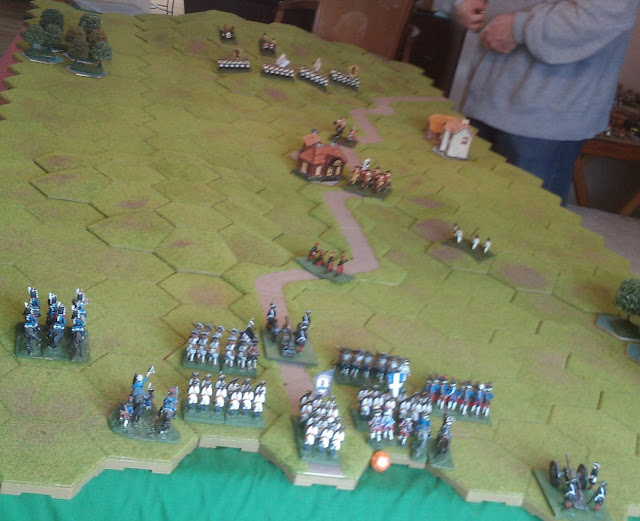 (The hills looked more hill like in person, they are well camouflaged in the picture)

There was a short pause while I pushed up the road. 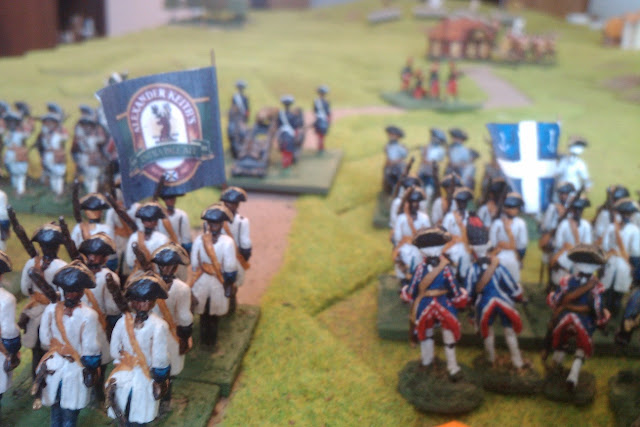 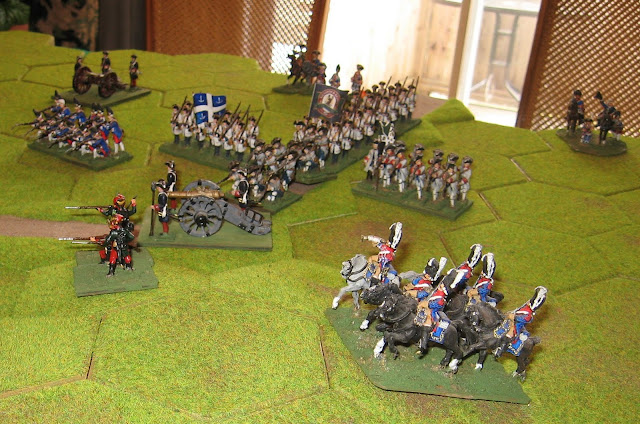 The view from the Austrian side. 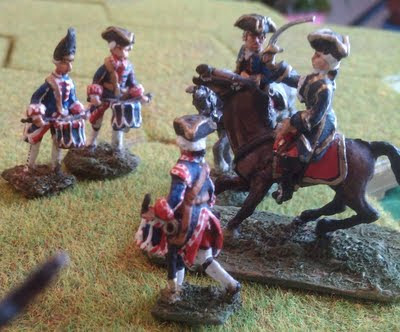 1 drummer or staff officer for each 3 units + 1 for the general. Recount when I lose a unit to see if a drummer needs to be removed. Here we see 5 markers indicating 5 dice.

Using the road to maximum advantage, I pushed a gun and infantry up the table, while Ron's Croats occupied a village 1/2 way up the valley. I deployed my gun in a position to blast him out and moved infantry to hit him from several directions at once. My gun pinned his infantry then his Croats blew my gunners to kingdom come. (not to self, don't get the gun so close).  An assault by 3 infantry units then went in and was repulsed. Finally the a battalion of Keith's regiment deployed and blasted the pesky enemy skirmishers out of their stronghold.

As I shook my battered line out and advanced on the next village, Von Ron waved his hat and the White line rolled down the hill, manhandling the field guns forward to the edge of the hill.  Caught trying to rush down the road in a column of battalions,  my infantry  suffered from artillery fire with overshoots landing on the battalion in behind. A bold cavalry charge surprisingly was shot apart by Keith's.

I quickly shook the rest of my infantry into line but soon lost another battalion to artillery fire. Into the gap came Ron's infantry and seizing the initiative, they charged in, 3 on 1. 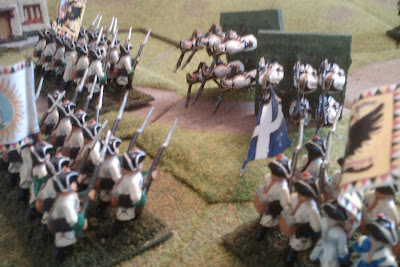 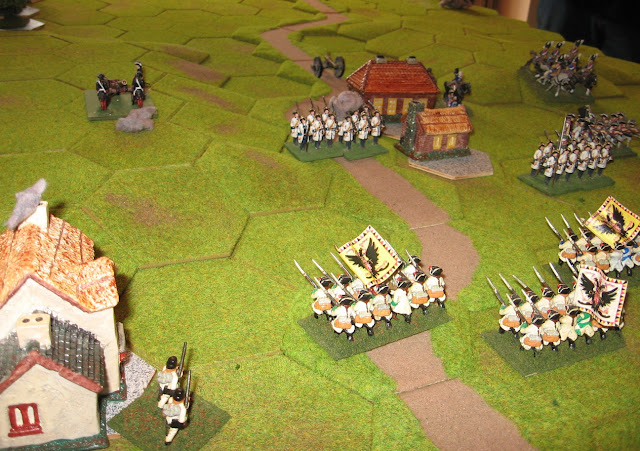 So what did we think. Hands down it was a very enjoyable game. We played 20 turns in about 3 hours and reached a definite conclusion. The activation and drastic combat presented challenges but nothing that felt like these were more important than our command decisions.   In each case, it was the players' choices that had the most impact which was very  satisfying, even though many of my decisions were less than happy while many of Ron's were masterly.

The hexes were excellent. They provided the benefits of a grid with ease of measuring, determining arcs, front, flank etc and removal of fiddliness, but without the artificial no-go zones of the squares, especially if allowing free choice of side or angle.  I may have to experiment with allowing diagonal movement on squares.

There were a few issues with the feel for an 18th Century game,  especially around how the melees worked and about how flank attacks were no more effective than frontal attacks despite the troops close order linear formations and ponderous drill.  We also felt that the Grenadiers didn't have sufficient advantage since they would be pinned as easily as anyone else and if they did get into melee, it was still most likely that both units would be destroyed.  After some discussion and some manouvering about on the table we decided on the following (or rather my interpretation  of what we decided).

In order to represent the effect of being armed with smooth bore muskets, and of the close order, linear formations the following rule changes will be made:

1. All infantry and cavalry combat values will be reduced by 1. (4 for infantry and cavalry, 3 for native infantry)
2. Any shooting or melee against Grenadiers or Heavy Cavalry will be at -1 to the die roll.
3. A unit which moves adjacent to the front of an enemy unit must halt and face it. If there is a choice they may decide which one to face. The defending unit does not move.
4. During the melee phase, every unit on both sides which has one or more an enemy adjacent to its front will roll a combat attack against an enemy unit. If there are several, it may choose.  The player move moved his units into contact is the attacker and will retreat if all enemy have not been eliminated or may advance if the unit they attacked is destroyed.
(for example, if a defending unit is facing a hex side and is supported by an adjacent friend and the enemy attacks with 3 units, the 3 units may all attack the 1 unit or 2 may attack 1 and the 3rd unit attack the 2nd unit but in either case, the 2nd unit may also fight back, so 3 dice vs 2. This compares with the current system where the attacker would roll 1 die and the defender would roll 1die at -2 for 2 extra adjacent attackers while the 2nd defending unit is ignored).  In the case of a flank attack, the attacking unit would roll but the defender would not. If the attacker failed to destroy the defender then it would be a tied melee  and the attacker would fall back. If there was a 2nd defending unit, behind and to the side, the attacker would have to turn and attack it instead.

These, as yet untested, melee changes will  encourage and reward 18thC deployed in 2 lines with an emphasis on maintaining formation.

The artillery may be a bit too mobile for the 18thC but Ron & I didn't discuss that and I don't see an easy simple solution which isn't excessively onerous.

Just for fun, I did some calculation, a battalion fills a hex and musket range is 2 hexes. On can argue things but that makes a hex somewhere around 100 -120 yards across.  The scenario gave the arrival times in 10 minute intervals so I suggested we call each turn 10 minutes. This means the 20 turns that we played  in just over 3 hours represented 200 minutes, or, just over 3 hours. An infantry unit was able to march 12 hexes or 1,200 yards an hour by road. A little short perhaps but if the table was long enough a day's march would be about right. Interesting.

So, all in all, a good day of gaming. My only real problem is that I found myself browsing a catalogue of Hexon tiles and wondering how to raise enough money to cover my 5x6 table, short of getting a job!
Posted by Ross Mac rmacfa@gmail.com