Do Re Mi - Scaling the Portable Wargame

One of the things that attracts me to the Portable Wargame is its scalability. I've enjoyed short solo games with less than a dozen units on a card table and a longer opposed game with more than a dozen units on a medium sized table. I figured it was time to step it up so last night, I replayed the same scenario a 3rd time but with double the number of units. 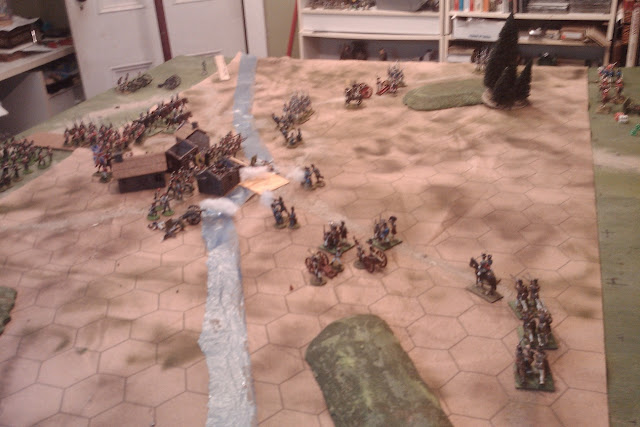 The situation around Noon or turn 14. The American columns are crawling along on 1's, 2's and 3's.
When using the 3" hex mat, there are roughly 24 hexes along the long side of my table allowing up to 36 units, however, my planned 4" hex grid will only have 18 hexes allowing 27 units. The larger side in this scenario had 13 units including the commander  so doubled to 26 this nicely fit within the guidelines. A handy sort of thing to keep in mind when designing armies. There comes a point when miniature armies exceed the tabletop capacity. There is still a point to painting up different troop types, allowing variation in force composition but little point in painting up more of 1 thing than can be used unless planning a campaign or an expedition to Bigger Tableland.

Now having mentioned one sort of scaling and the idea of planning wargame forces, I also decided to have another look at ground and figure scales so I could "see what I was looking at". Nothing sucks the fun of a game like getting excessively concerned with time, ground and figure scales, they will almost always be wrong in one way or another, especially if the game works. Its still useful to know if you're gaming Sharpe and the chosen men or refighting Waterloo though.


One can argue ranges and whether or not units are at the leading edge of the hex they occupy or in the middle and so on but generally 1 hex to a 100 yards seems to be about right for the musket period. The late 19thC game would appear to me more like 150 yards or more. One hundred yards per hex  makes long range musket fire about 150 to 200 yards, field gun range 600 yds (low perhaps but it happens to match Grant's choice in his Napoleonic Wargaming book  as the range at which it was worth burning up ammunition)  and 1,000 yards for heavy guns which sounds right.  Now in 100 yards, one can fit very roughly 300 infantry in 2 ranks or 450 in 3 so a small battalion is 1 unit in 1 hex and a large 1 is 2 wings with each wing being one unit in 1 hex. Each gun would take up the space of 6-8 guns and cavalry would work out at about 200 per unit..

Having done a quick check, when using 4" hexes, the 150 yards per hex actually matches the Fire & Fury scale fairly well (600 yards to the foot in either case) so that if I still had a 6x8 ft table, I could translate their scenarios into PW ones fairly easily. Even without that, I should be eventually able to manage scaled down versions of Shiloh and 1st and 2nd Manasses amongst others. Pickets Charge will fit, even at 100 yds per hex! 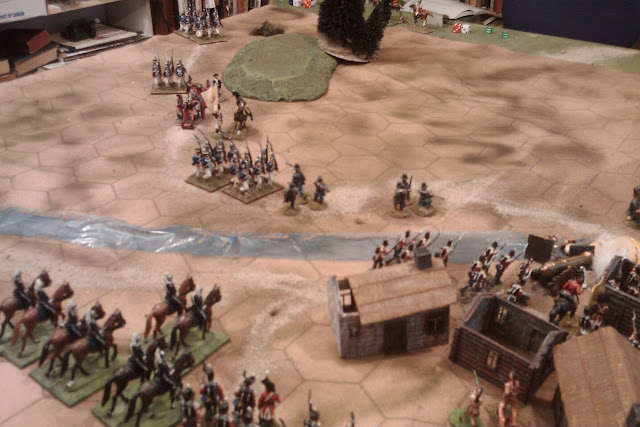 Noon on the other side, the Canadian Cavalry has rushed to the battlefield, but can't quite figure out what to do about the enemy across the river so is just trying to stay out of the way of the guys with guns.


Having checked a couple of  War of 1812 battles, the larger ones will fit nicely on my 5x6 table with 2 or 3 stands per historical battalion.  There are a number though, that will just not be big enough to make a satisfying game. There are a couple of ways to handle this, one is to double the ranges and movement which would 1/2 the number of men per unit and allow sufficient units without changing the ratio of movement and shooting. I don't care much for fiddling with the rules in that manner though and I suspect that it might change the feel in other ways. A second option would be to use some sort of roster or divide each unit into 2 but again this means fiddling with rules. Yet another option, probably the best  is to ignore it, fudge the ground scale a little, assume large gaps in the line and just field more wargame units per historical battalion and not worry about it.

I still don't have my mind wrapped around what a command unit represents, I picture a mounted officer with  a few aides but since it has the fighting power of 2-300 men, it must include some sort of reserve  so I think I will count the command stands as infantry (or cavalry) when breaking down historical orders of battle into wargame units.
Anyway, my mission now is to do a portable wargame order of battle and 5x6, 4"  hex map  of each of the War of 1812 battles that I might want to fight. This will allow me to finally decide just what troops I need.

OK back to the game at hand.

I figured 1 Command Unit was going to have trouble handling all those troops so I doubled those as well and divided the armies into Brigades, rolling activation dice for each Brigade separately. That sounded good and worked well enough in a way but 2 command units wasn't really enough (This brought to mind various discussions about why entire armies didn't just pick up and attack the enemy in the first hour and get it over with. This nicely recreated this without explaining it.) Looking at a handful of historical OB's it looks like 6 to 12 units per commander would be about right. These would be 1812 Brigades with battalions being 2 or 3 stands. Looking at the OB for Gettysburg in F&F,  this became a Confederate Division or Union Corps with each brigade being 2 to 4 units.

I also decided to add some flavor to the units. In my Morschauser variants, I tended to have 3 unit types: Militia, Average and Elite, largely differentiated by their close combat power and in some variations by their ability to rally. Ron and I tried the varying combat powers but since infantry have a higher value than Morschauser's units had, giving a bonus rapidly headed towards automatic hits so we brainstormed a bit and are each testing a new rule that allows Elite units to unpin and move or shoot if 2 activation points are spent. This reflects their superior training and morale and while it doesn't make them more likely to win a melee, it makes them much more likely to be able to cross the beaten zone and engage in melee. Since each 3: hex barely held 6 40mm figures and I was using my old MacDuff units, I gave the British 2 Grenadier companies.
I also gave the British a siege gun and a light gun on table with 2 field guns off table and gave the Americans a battery of 2 light guns and 1 of 2 field guns.

So far, all the benefits were on the side of the British so I allowed the Americans to field riflemen with a 3 hex range as light infantry. Light infantry are another experiment Ron and I are making. After various overly complex experiments, we have given these the same option to move twice as native Infantry do, to balance things, their Melee Power has been reduced by 1. 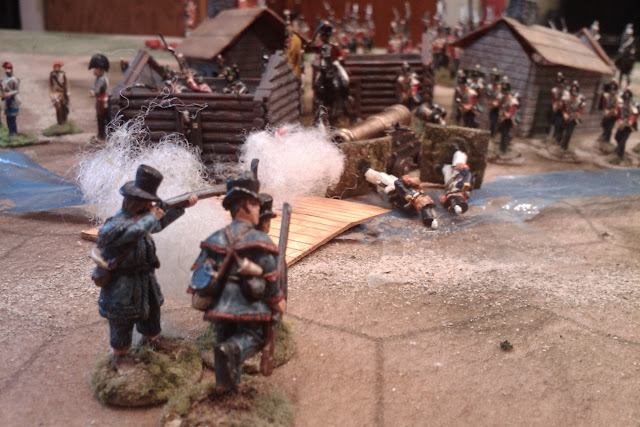 Pickaway County Rifles pick away at the British gun crews from a safe (relatively) distance.
Who the heck let these guys into the game anyway?
Unfortunately, not only did the game chew up my mold making time, but I snuck in on my way to bed to have a look at the game in progress as I had left it and found myself an hour later, just finishing up. So pictures and narrative are sparse at best. 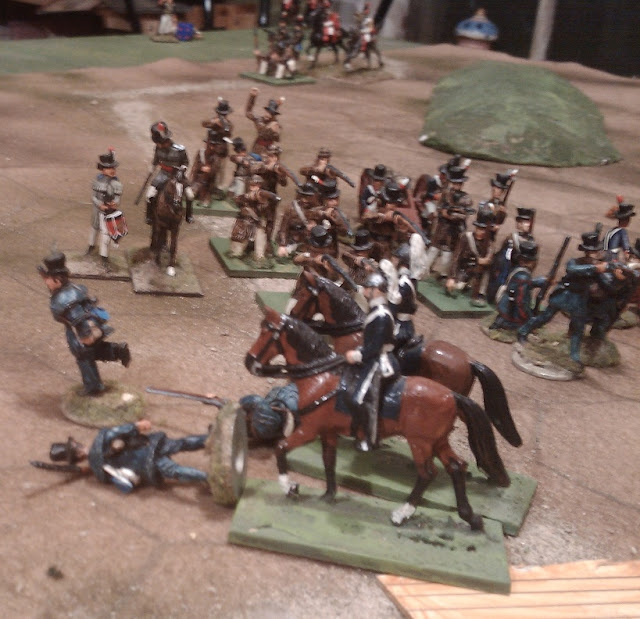 Take that you Yankee Invaders! Oops they've got friends.
Eventually, once all his gun crews and a big chunk of his infantry had been shot down by unsupported riflemen and artillery, the British commander woke up and ordered his Light Dragoons over the bridge. Their double move allowed them to charge from outside rifle range and while one was lost, the score was Cavalry 3 : Rifles 1 when the NY Dragoons belated galloped up. 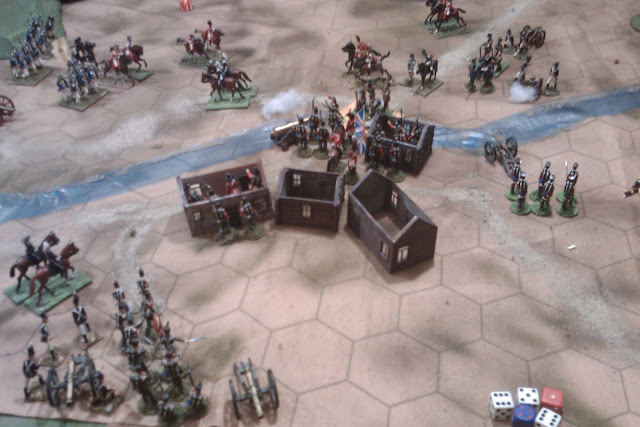 Time for Tea
At this point the British  had lost one commander and over 12 their units. American losses had been lighter and they now outnumbered the British by 2:1. Possibly the British could have held the bridge till nightfall, a mere 20 turns away, but mostly the cost would have been the destruction of the army so they pulled back while they still could.
It felt good to have a table full of troops and the rules handled the larger forces well. Actually for me the game  was better because the loss of any one unit to a single die roll was less important, especially if one had a reserve in hand to plug the gaps. I'd still be tempted to allow each unit 2 hits but if I did, I'd not have finished this game last night and I doubt that the end would have been any different. There was a pretty handful of activation dice to throw but I've gotten pretty good at translating d6 into activation points and have learned to use different dice to record the number of points available, especially when tired.

With the activation dice split, between brigades, I ended up with part of each brigade moving forward to attack, and part hanging back.   Historically, in the War of 1812 at least, it seems to be more common  to have a 1 brigade move forward while the other holds back so I may share the activation dice next time.
The riflemen were a nasty shock, especially with the river being there so that it was hard to get close up to strike back at them. An historical enough problem though the proportion of riflemen was perhaps a bit high. My poor Grenadiers never really got the chance to demonstrate their eliteness, but I'm told they died in straight lines.
Tomorrow I may post a report from Ron on one of his 18thC renditions of this same scenario or I'll go into some thoughts on terrain, what I need to do and how I expect my table to look and function when all this is done. .
Posted by Ross Mac rmacfa@gmail.com