There were lots of things I should have been doing today, Renovations, Gardening, Housework, Preparing for my departure next Saturday on a  10 day jaunt to Historicon.  Staging my 4th refight of Chrysler's Farm in as many months was not on the list but after 3 days with a gradually worsening tooth ache whose throbbing speaks of infection, and forced me to reinforce the pain medication with a little of the Water of Life, I was not in a mood to tackle anything serious. Luckily all the hard work had been done so it was an easy thing to set up the table. Besides, there is nothing like an historical refight to test a set of rules. 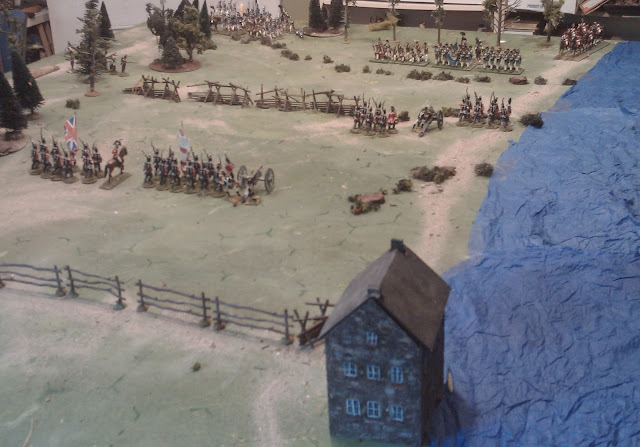 The armies at 2pm. The battle was fought in November so for once the bare trees are appropriate.


At my chosen scale of 100 yards per hex, I rechecked the map and ended up with more of the river on table.  This in turn allowed me to field the gunboat on table but it doesn't seem to have made it into any of the pictures. The width of my individually based figures meant that I should have fielded 8 of them per 300 men but I fielded 12 anyway or 1 per 25. Only 1 unit was on the narrower bases that had the right frontage but it made very little difference to the game. For the artillery, I fielded 1 gunner for each real gun giving the British a gun with 1 crew up forward and another with 2 crew farther back. The first US gun with 2 crew arrived on turn 4 while the 2nd gun with 4 crew showed up 2 turns later.

For the singly based units, I just laid the casualties down and removed figures that failed to rally. For the multi-based units, I used red caps for not yet tested casualties and white ones for permanent losses until there were enough to remove a stand. Marking the casualties and leaving them on table more accurately reflects what is going on and the stands were much easier to move but the markers are a pain and the individual figures more fun so that one is still up in the air.

One thing the game did reinforce, is a feeling that I got over night that although not suitable for low level skirmishes, the rules are much closer to MacDuff then they are to what Hearts of Tin were intended for. In fact, this is getting towards the largest battle that the rules can handle with my 40mm troops on this table while it is about the smallest action that HofT was envisaged for.  So, the new concepts will be incorporated into MacDuff and if/when I get back to Hearts of Tin it will be a 1 hit removes a stand system. It depends on whether I want 3 rule systems or just 2. (MacDuff + the Portable Wargame) 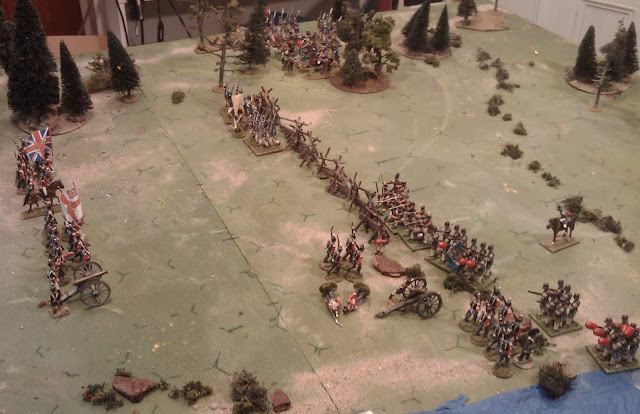 Once again I based the American attacks on the historical battle. I started the battle at a slightly later time  than the first time so gave myself only 2 1/2 hours or ten turns at which point the Americans should be defeated historically. To reflect on the poor performance of the American commander, he was not allowed to move or to join any units. Luckily for him, his remote commanders, making the main attack, only failed their command rolls twice. Unluckily for him they were at a critical moment.

As the first clashes occurred over the gully and in the woods, I knew the Brits were in for a rough day. I rolled the same dice for both sides but whether it was for movement, shooting, melee or rallying, the Americans seemed to be getting the Lions's share of 5's & 6's, leaving most of the 1's and 2's for the British.
In retrospect, rather than boosting the British regiments to Elite, I should probably have left them as Regular down graded the Americans who lacked experience and training and had had a rough fall with sickness and a long wet journey. 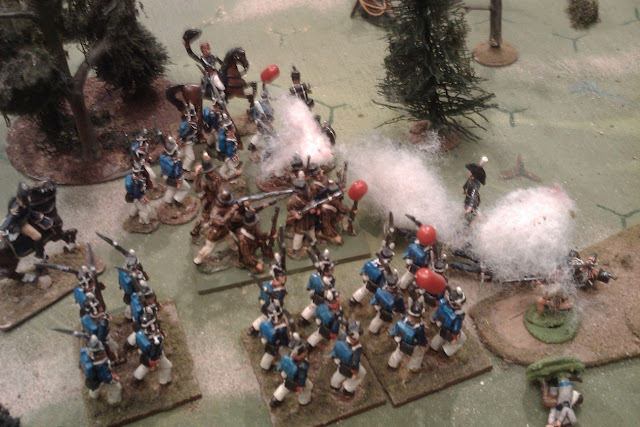 This time the American columns were able to keep up with the historic advance, or they would of if I could have coaxed the Voltigeurs to retreat as ordered.

These things usually turn around though and eventually luck evened out, aided by the gunboat, and both attacks were thrown back and several broken British units rallied.

By the start of turn 9, all the British units apart from the guns and the 49th Foot had been broken and just barely rallied. One good push would break the army but 6 out of their 7 original units were still on the field. The Americans had been even harder hit after the last few turns. Three units were still in good shape but only 6 of their original 10 units were still on table, and 2 of those were broken.  It was do or die. The cavalry were ordered in. 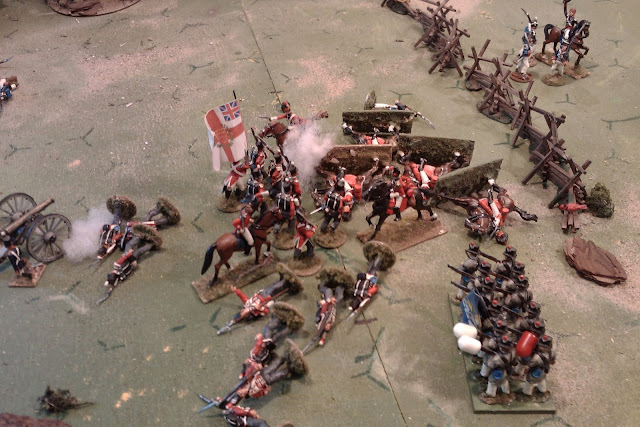 A damn close run thing. As the clock struck 4 pm, the American army started to retreat.