Trimsos: The Testing of Hosts 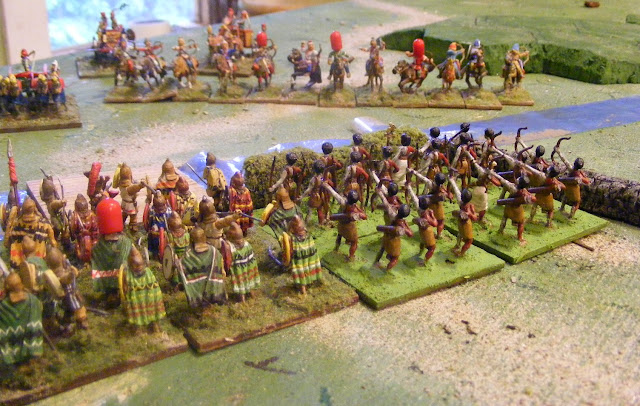 I actually played through the game three times, but I kept adjusting and tinkering with rules as I went so have discounted the 1st 2 games (1 victory for each side btw). There wasn't anything really wrong with the first tests but various things were awkward and the first game, seemed to lack depth in terms of player involvement.

Since the primary goal was to test and develop the rules,  this post is focused on that aspect of the game rather than on a narrative.  For the same reason, although I did my best to translate and deploy the Hyborian Age armies as closely as I could within the framework of a Gathering of Hosts Mede-Lydian battle, ( see previous posts) I made no effort to recreate the battle, going so far as to deliberately avoid rereading Don's account apart from the set up. That said, the set up pretty much dictated the battle plan for each side. 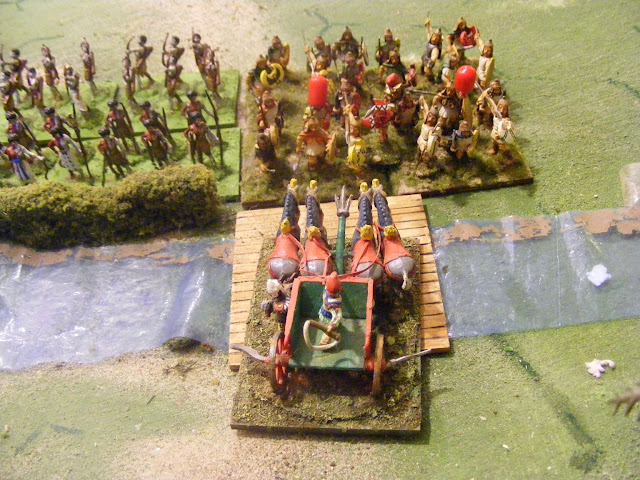 The game broke down into 3 struggles, the fight for the bridge, the fight for the Pimple on the Mede left, and the fight in the center. Since the fight for the bridge was isolated, I'll deal with it first. The Medes had 4 stands of horse archers and 3 scythed chariots to drive off 4 stands of unarmoured spearmen and 4 of archers led by a Captain. Due to a lapse on my part, I several times forgot that the horse archers didn't have their own captain. I think in future that I will include one for each of what would once have been a "unit". In the end it made little difference as the archers rarely moved but traded long range shots with the Lydian archers while trying to soften up the Thracians. Periodically, one of the Scythed chariots would thunder across the bridge when the Thracians looked a little shaky), but none of them  could roll up when they needed them and at the end of the game the Medes had lost 3 chariots and a horse archer stand while the Lydians lost 1 spear and 1 archer stand. Equal forces had been committed, the Medes in a gamble on getting a force into the Lydian rear, the Lydians to holding them off. In the end the casualties slightly favoured them and they did hold the bridge but if either unit had been committed in the center they could probably have tipped the balance while the other could probably have held the bridge on their own, or at least held it long enough. 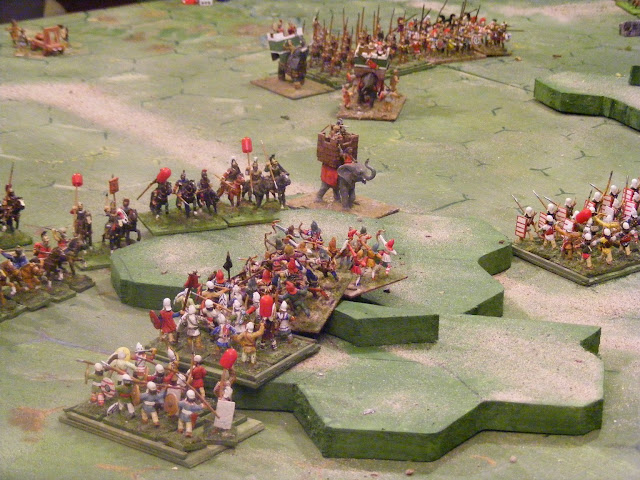 The Medes moved rapidly to seize the Pimple with archers and spearmen and these held off assaults by cavalry and elephants for most of the game. On the end of the line, there was little the spearmen could do under attack by light cavalry but hunker down and rally off hits until the light cavalry finally remembered that they could prevent the rallying by moving close. This put them at risk of combat with the spearmen when the Medes had the 2nd move but they got lucky and on the one occasion that the spearmen managed to catch a few cavalrymen (shades of Platea), the spearmen rolled a fistful of 1's and 2's and only inflicted 1 hit allowing the cavalry a chance to pull back before the next round of melee.

The veteran Skythian archers on the hill served as well as has been their wont over the last 35 years. Every time the heavy cavalry approached close enough to charge uphill, the archers would roll a fistfull of 5's and 6's forcing the cavalry to choose between rallying back, (a 3 or 4 turn process depending on the activation or order rolls, the stands have to retreat individually to a safe distance, then spend a turn halted to remove a hit then turn individually and form up into a battleline again ) or facing a high risk of being wiped out as they rode down the archers.  One of the elephants did mange to charge uphill and destroy a stand but was taken down itself (must have been those Skythian hand axes but then, it was a rather small plastic elephant). 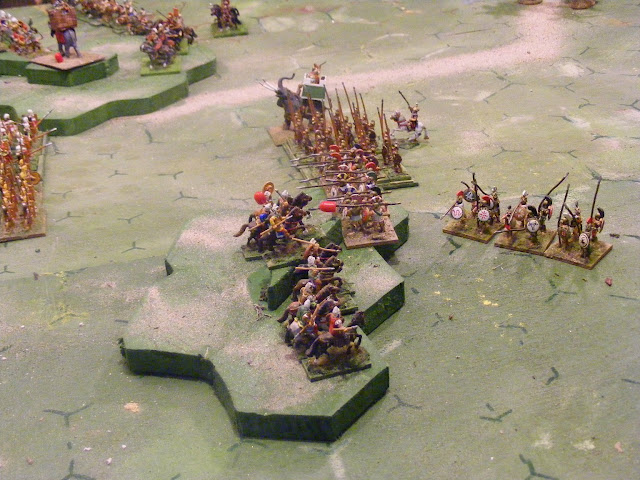 While the fight for the Pimple was going on, neither side dared advance too far in the center but the Medes thought they saw an opportunity and  launched their cavalry against the allied Hoplites, catching them as they maneuvered. It didn't help and they quickly rallied back and reverted to tossing javelins. 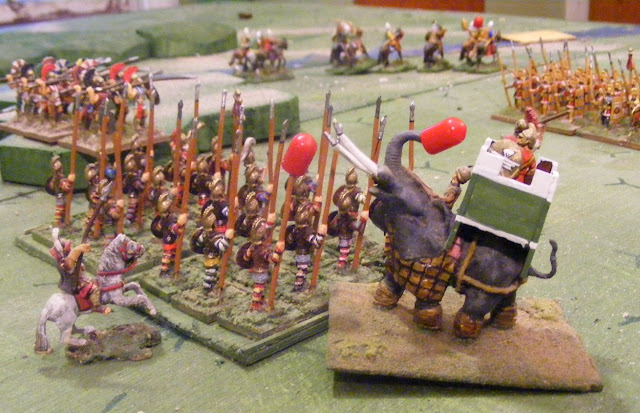 In the center, the 2 stands of archers managed a hit on the Garrison elephant which immediately panicked, heading straight for the Lydian spearmen but being killed by the mahout just before it reached them (in other words their move ended up just short as can be seen in the background 2 pictures above).  Much later the archers managed a hit on the last elephant, Ellie the vintage Airfix elephant, who also panicked and ran towards the Phyrgians (what is it that attracts elephants to Phrygians?)   Having started adjacent to them, she caused a fair amount of mayhem on her way home.  Not a sterling day for the elephants. During the 1st playtest, they had all gotten into contact, either without being hit or not panicking, and wrecked havoc on the Mede spearmen and archers. Dangerous beasts but not to be relied on.

At last, the lines were sorted out, the elephants chased off, hits rallied and with the Lydian general ordered an attack all along the line.

The Greeks again proved their worth in melee but, alas, the Phrygians, with the general at their head were no match for the Medes and were wiped out in short order. Things looked bleak for the Lydians, without a General they were down to 2 order dice vs the Medes 3 and had lost 8 stands in all and were 6 away from demoralization while the Medes had only lost 4 at this point. I nearly called the game but the Fat Lady hadn't sung yet and the Captain of the cavalry was in no mood to rein in as his riders topped the hill. With only 2 stands of archers in position facing the cavalry, the Skyths ran out of 5's and 6's.

There was a turn or 2 of jockeying as the lancers rode down the  archers and reformed, then, 1 stand above demoralization,  a roll of 11 Orders, sent every available cavalryman forward. The resulting melee was fierce and when the final tally was reckoned, both armies had fallen to their Demoralization point (over 50% of stands lost).  Once demoralization sets in, stands which can usually take 2 hits, are routed and removed when they take 1 hit (or are carrying one already). Looking at the picture above, all of the stands which have a red markers are carrying a hit and thus will rout, (including the one which the Mede General is attached to) leaving the table looking like: 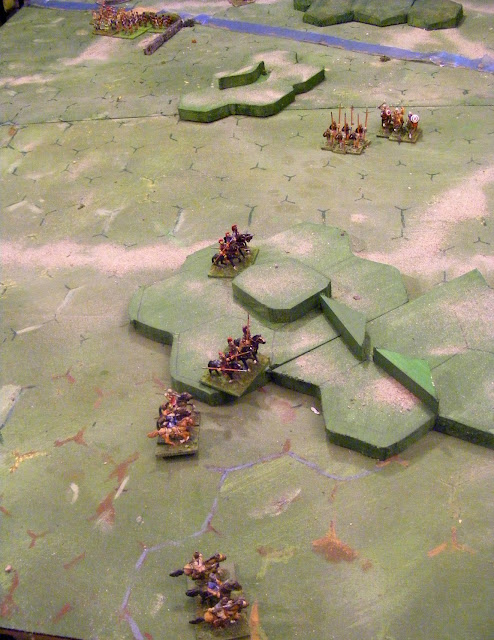 The Medes had been reduced to a single stand of cavalry and 2 engines on the near bank and 3 stands of horse archers on the far bank. The Lydians still had 4 stands of cavalry, 4 of spearmen and 3 of archers plus an engine, not to mention 2 captains. A Pyrrhic victory for the Lydians but that is better than no victory at all.

Of all the versions of the Gathering of Hosts that I've tested over the last year, this was the most satisfying yet. The Order dice may not be original but they work. On occasion,  a bad roll will limit a player's actions unduly but in most cases there are sufficient to do what needs to be done as long as an army is well ordered. Once an army is engaged in combat, or if it is allowed to fall into disorder, then there are almost never enough points. The key thing though is that player decisions and the interaction of the armies trump the die rolls in determining friction, most of the time.

The shooting worked as intended from the very first version, but better than ever before. Long range fire can weaken an enemy and in particular can weaken or even turn back an attacking force but on its own, cannot usually do much damage as the enemy can generally rally off hits as quickly as they can be inflicted, as long as he doesn't move... In order to destroy the enemy, troops need to be sent in close to stop the enemy from rallying which puts them at risk of reprisal. If you can time it just right, and are favoured by fortune,  a barrage of missiles followed by a charge can burst an otherwise secure line. Mobility helps though, especially so you can pull back quickly if it doesn't work. A Parthian army suddenly sounds very dangerous, as long as the terrain is open and the enemy doesn't have too many missile troops and cavalry.

One concern is that the melee dice may be too  generous. I want the ability to destroy an enemy stand in melee but I'm not sure it isn't happening too fast, or maybe it was just lucky dice. On the other hand, it does keep the game exciting and I don't know that historical clashes weren't often short apart from when too heavily armoured  infantry blocks collided, something I would also expect to go on a while under these rules.  Only more playing will tell but that may have to wait on my part until after Historicon.

The version I used are posted but I know there are some little things that aren't explained as clearly as they should be and I keep finding obsolete bits that didn't get edited, and some little suggestions and examples that may not be quite right. For example I don;t think that I've made clear that Captains can only lead troops assigned to their command at the start of the game, not just any old stand that wanders into contact with their battleline.  Lots of work to be done yet.