The Hosts Gather at Trimsos

All these Portable Wargames got me thinking about bringing the Ancients into the grid and called for a test game for the results. Since I had recently played Action in the Plattville Valley from Wargames, the Battle of Trimsos seemed a likely choice.

Some brief experiments showed that if my 25mm armies were based on a 40 or 80mm frontage (as used by Basic Impetus), conversion would be a lot easier.  It would actually be practical to fit 12 or even 15 close order infantry in a 3 deep formation on an 80x60 base. Since my armies are in a bit of a state of flux as I stumble about a bit, trying to decide what the shape, look and feel of these armies should be, it would seem to be an ideal time to switch but for various reasons, including external compatibility, I am leaning towards keeping the 60mm wide element as the basis of my forces.

One thing the test games this week did confirm, is my dislike of handling single 25mm figures on sabots. Small numbers of individual 40mm figures on stable washers are ok but large numbers of fiddly little 25mm figures are just a nuisance, especially when moving them to or from the table or when shifting troops across the middle of the table, especially on rugged terrain. Magnets and element sized bases help a little but make the singles rather pointless. Even more annoying is the tendency of casualties to straggle, sometimes taking months to rejoin their proper units or to reemerge from under furniture.  Well, sometime you need to confirm these things with field trials. Re-basing them is low on my priorities but there won't be any more.

The second discovery was that in addition to insisting that the rules be usable with or without a grid, insisting on traditional units of 24 or more figures was making life more difficult, especially since the rules needed to cater for different unit sizes. Since I didn't want to bend things too far to accommodate the grid,  I decided to revisit the question of what the units represent and why I adopted them.  Here I run into conflicting  requirements. Am I trying to represent specific historical units or just trying to match CS Grant's scenario format and to capture the feel of Charles Grant's refights from Military Modelling and Ancient Wargames?  Are they low level units appropriate for a small war activity, raids and ambuscades, say 100 or so men? or battle units or 1,000 or more?

A review of games played in the last 2 years suggests that the answer is yes to virtually all these questions or in other words, they are 1 thing today and another tomorrow. More than that, like more modern armies, ancient armies seem to have had a hierarchical organization so the question of what is a unit has more than 1 possible answer in history as well as on the table. Given that, there is some virtue in the approach taking in Rough Wooing. Each stand becomes a "unit" with a number of stands including a command stand forming a group which is the basis of maneuver.  The more flexible the army, the more command stands it includes. The addition of activation dice such as used in DBA or the PW enhances this approach.

To bring this all back to Trimsos, the choice to refight a non-historical battle may not seem like an ideal starting point to test rules and organization but in fact it cleared the air and covered the gaming as well as historical questions.

I began with fielding units of 24 infantry or 12 cavalry for each of Tony Bath's units, Medes filling in for the Hyperborians since they had chariots while a polyglot Lydian led Alliance filled in for the Hyrkanians (which meant a cover story for the elephants but I'll skip that for now).  I was afraid that it would twist things too much if I fielded my Mede and Persian infantry as the usual bow and spear units so decided that any figures with a spear was a spearmen and by shuffling a little ended up with 2 units which were all spearmen and 1 which had 1/2 spearmen and 1/2 archers. The Lydians on the other hand, included a unit of heavily armoured Greek mercenaries which more than made up for the extra firepower though the elephants may not agree. With the adjustments to the rules, for the last game this was converted to 4 stands being fielded for each scenario unit with each side having 3 stands elevated to "Captain" status. This was an arbitrary number as I stumbled to figure out what was appropriate for these fictional armies. If I played it again, I would increase that slightly.

So here are the armies deployed. 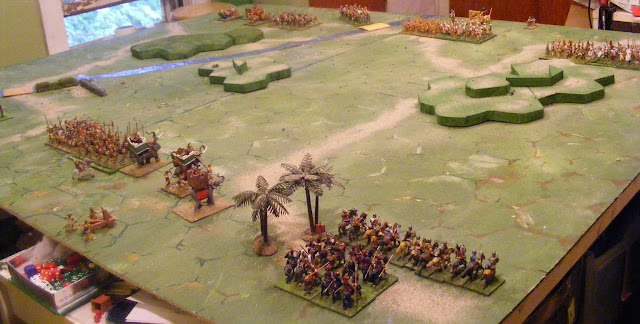 On the right (or far side of the table) , 4 stands of Mede spearmen including a Captain and 4 of Skythian archers,  next to the bridge are 6 stands of Mede spearmen including a Captain and 2 of archers with the General behind them and 2 engines in the rear (I made no distinction between heavy and light artillery). Across the bridge are 4 stands of cavalry with javelins including a  Captain. Beyond them are 4 stands of light cavalry horse archers and 3 scythed chariots. Heavy chariots might have been more appropriate but I wanted to try the scythed ones.
It was 1/2 way through the game when I realized that I had been moving the light cavalry on both sides as if they had  their own captains. In future I will have to be careful to leave a gap between stands that are not formed in a battleline including a Captain. Whether or not the light cavalry should have had a Captain and thus been able to move on a single order or activation or whether this gives too much flexibility is a moot point. There is an argument to be made that a more historical game can be obtained by forcing a  player to either spend his points driving his light troops about or move his main battle lines up, thus reflecting the sort of phases that seem to occur in many battles.

Later, pictures and an account of the game
Posted by Ross Mac rmacfa@gmail.com

Email ThisBlogThis!Share to TwitterShare to FacebookShare to Pinterest
Labels: ancient