Wargaming in the Middle Ages or Old Enough to Know Better

I'm not old though lately I feel it some days. It is now 40 years since I took up wargaming and even a most optimistic assessment is that there are not 40 more years of wargaming ahead even if I do live to be 96. Given family history and my own medical history, state of my eyes and mind etc, I figure anything over 20 years will be a gift and if I'm painting more than the occasional token figure 10 years from now, I'll be surprised. A cause for gloom and despair? Not at all, its about planning for best effect.

Lets start with figures, three things are colliding here: expected painting rates, room to display or store figures and ability to use them. I have never kept careful records, its not in my nature and frankly, I usually don't care. Still, looking back, there are few if any years when I painted less than a 100 figures and I know there have been years when I painted 400 or more. If I set a goal of no more than 200 figures a year, that's still 2,000 more figures to incorporate or get rid of. I don't have room to store let alone display what I have at present so the policy at a minimum is going to have to be: 1 in 1 out and preferably something more like 1 in 2 out, at least in the short term.  Since I like to use as many as possible of the figures that I have painted, as often as possible, it also behooves me to revisit my planned  and existing collections to see if it all still makes sense or if I need to make some changes in direction, perhaps drop some less played or less favored collections or merging some to allow a more in depth. treatment with more trimmings, terrain and troop deployments and less bait and switch. I also need to ensure that I am planning for my my 5x6 table interms of number of figures and style of terrain and scenario.

Barring major, unforeseen changes in my life, I think an average of 25 games a year is not an unreasonable expectation, counting two short games in a single session or a long one spread out over separate days  as a single game. Indeed, for the next few years I hope to better that by anywhere up to double. So at a minimum that's at least 500 games ahead.

Don't worry, I'm not about to start planning the last 500 games out in detail, but it certainly sounds like there is still scope for variety and more than 1 campaign. But it also sounds like I'd best get cracking on the things I really want to do since I have some things that are still waiting after 40 years of diversions! 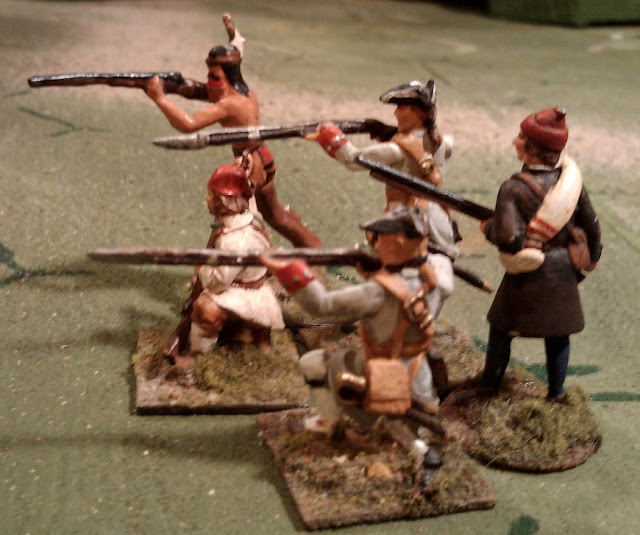 Hmm, what an odd thing is taste. Mixing Scruby/Zinnbrigade figures with Sash & Saber bothers me enough to ALMOST spoil a game but it seems that mixing semi-flat with fully round Prince August, Irregular, Trident  and maybe even Sash & Saber, doesn't bother me at all. Hmmm I sense a forth coming  merge of Rosmark and the Acadian War of Independence into the NQSYWinA. Hmmmm The Yellow  Hussars patrolling for Indian raiding parties?
Posted by Ross Mac rmacfa@gmail.com