Since I now have a gridded table, (somewhat earlier than anticipated,) this doesn't seem the best time to trial a grid-less version of the portable game. No, this calls for an inaugural game.

There are still three issues at least that I'm not quite satisfied with when it comes to using the Portable Game for some of the campaigns that I have in mind. The first is a simple, elegant, effective and useful way to portray higher level formations. I`ve had lots of ideas but they all flunk 1 test or the other, luckily it is the least important of the 3 for what I have planned.

Second is the issue of losing units to one lucky shot. The pinned rule hasn't helped with this as the odds of a stray shot destroying a unit are still as high and in melee, odds are still in favour of both units destroying each other. When there are enough units on the table, its not as big a problem but when looking at the War of 1812 in particular I have some conundrums. With a 2 hex musket range, each infantry unit should represent somewhere between 150 and 300 men or 1/2 a battalion. For the larger battles, that makes a decent game with 12-24  units per side but in some of the smaller actions, it leaves one or both sides with only 2 or 3 stands. Even fielding 1 stand per 50 men, which means assuming huge gaps in the line and a very short musket range, will only boost these smaller actions to a 6 -9 stands which means 1 or 2 shots or combats could decide them . Yes one could play with a different set of rules for the bigger and smaller actions but my intent is to use one set of figures/units and rules and have some of the smaller actions as 1 hour games, the medium sized ones as 2 hour games and the largest ones as 3-4 hour games,

The last, closely related, issue is troop quality. This was a war where some very small forces beat much larger ones, partly due to the use of fortifications but also at times partly due to the superiority of well trained and disciplined troops to untrained ones. . Hard enough at the best of times to beat larger armies but when one lucky shot is all that`s needed or when an inferior unit still has a good chance of taking out a better opponent in melee, its even hard to win with historical odds against you. 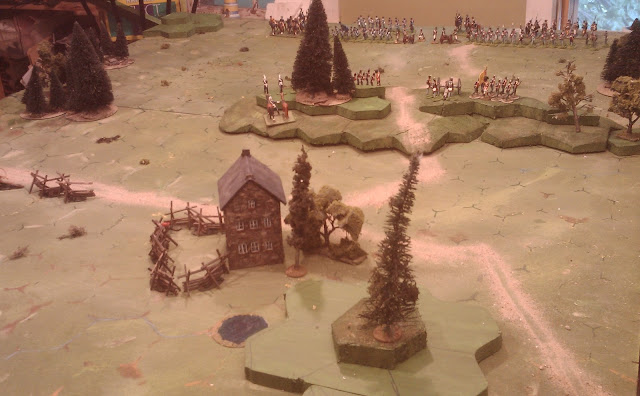 A favorite old scenario set up to try out the new hexes and the proposed strength point rule.  The hills were hastily cut from a mix of my old battered insulation hills and some old scrap 1`pine board ends.

I have considered various options, looking for the least invasive one, one that can be used or not used from game to game without changing other rules. The solution which I plan to test on Sunday is as follows:
(correction to rule in Red below, I don't know how this slipped passed my fingers and brain both so thank you to Jerry L for picking up on it.)

All troops are normally assumed to be average but some units may be expected to perform better or worse than average. Troops which are better than average, normally due to a combination of training, discipline and morale, are deemed Elite. Troops which are worse than average, usually due to poor leadership, lack of training and discipline and sometimes disaffection will be termed Militia. (with due apologies to effective, well trained  Militia units).

My intent is that this rule would supplant the earlier Elite Proposal.


When balancing  a scenario or designing an army, each unit is worth its number of strength points. 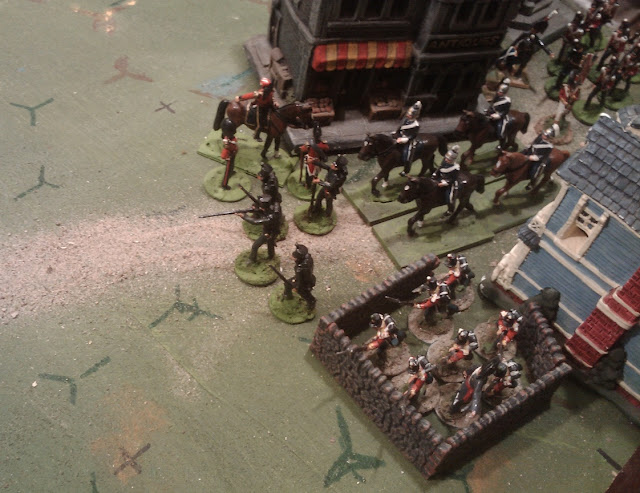 A number of my buildings almost fit in a hex, close enough to work  but most are solid ceramic so various hoops need to be jumped through when they are occupied. Eventually, I would like to build a full set of hollow buildings that will each fit in a hex or a double hex if a large building. For the 25mm troops a small town using 15mm ish buildings can be built into a triple hex with troops going in the yards.