And a game for a Day Off

Its the Thanksgiving Long Weekend here in the Great Red, Yellow, Brown and Green North. Unlike Cousin Johnathon we like to celebrate as soon as the harvest is in. Having recovered some what and it being a holiday I decided to act on my suggestion to replay Friday's game using With MacDuff to the Frontier since those are the rules I have selected for the Atlantica games. 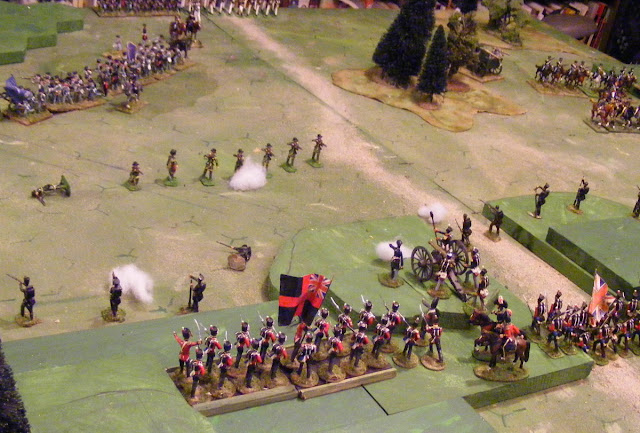 The opening shots are fired as the Blue army deploys.

As long as I was testing things, I decided to use as many singly based figures as possible. While exchanging units, I noticed that several of the ones I was using had been formed when I was thinking of 10/20 figures per unit so I decided to go with that. The forces ended up being:

The cavalry suffered from a  small error in designation, "historically" they all deserved a better rating. Since I am trying to differentiate these games from my War of 1812 games, I decided to follow up on a thought from last year and advance the date to the 1850's/60's with rifled muskets.

The plan was the same for both sides as in the HofT game. 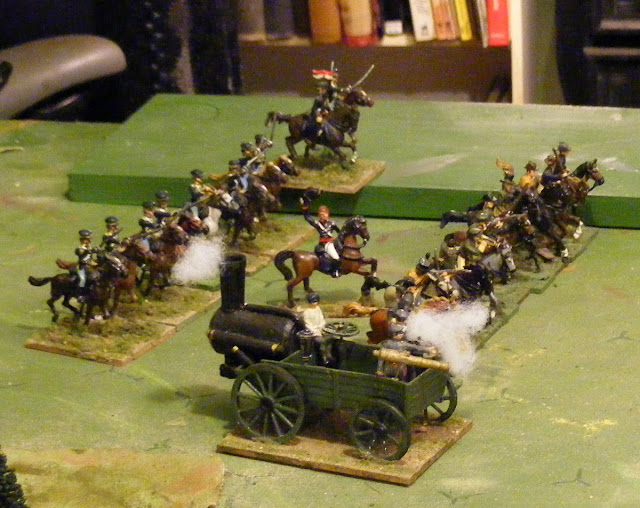 The Bangor Boiler Company Steam Battery, belching  fire and smoke out both ends.

The first game started off well, it had that relaxed Toy Soldier feel that I was looking for. But after a couple of turns, things began to feel a bit off. The card sequencing works well for the sort of small actions I played in September and for confused situations but with this sort of open field encounter between organized armies it worked but it didn't feel quite right. That's why I used to officially endorse two play sequence systems. After some thought I switched over to dicing for Initiative. OK thats why I am play testing, its now confirmed that whatever  changes have taken place, both options still have a valid place.

As the game progressed I noticed a few other things that didn't feel right especially the move full and shoot but also the rally, melee casualties amongst cavalry and the melee resolution. For a moment I felt a shadow of disappointment if not downright despair but then I remembered that even though its been  a month,  in game terms, I had not only just resurrected and restructured the rules and that this was the first play test involving an encounter between regular armies but that I had proposed some changes after the last game that hadn't been fully tested yet, including the move full and shoot. It also occurred to me that with 10 man cavalry units perhaps I should form them 2 deep so that they can't lose more than 1/2 their figures in 1 round of melee. Oh. No change needed.

I then spent some time going over the reports and the  discussions after the last games and thinking about the original rules and some of the other things I've learned recently or, more accurately, had reinforced  about how simplifications and omissions  can help improve game flow while achieving the desired feel. Then I spent more time revising the play sequence, shoot & move, melee resolution and morale rules and then I reset the table and started again.

The basic impact of the changes are as follows: 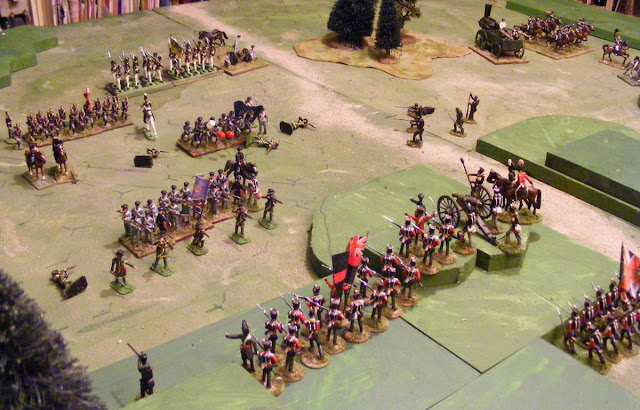 The action heats up in the final game as Blue's attack degenerates into  a firefight.

The resulting game was just what I had had in mind. It would fall into the smaller class of scenario and took me about 2 hours and what seemed like a lot of turns to play through. the largest game envisaged would have about 3 times the number of units, be hard put to fit on this table and should take a full 4 or 5 hours to play to a conclusion unless there was a time or turn limit.

Now, as to the game. On the left, Blue's infantry stalled in a firefight until first one then the other lead regiments broke. The Blue Guards charged the hill but with some deft dice rolling the Veterans came within a figure of breaking them. The Guards fell back, rallied and took up the firefight as the Lafeyette Volunteers also opened up. The Fusiliers came forward in response and along with the gun broke the Volunteers as well. On the other flank, a first cavalry attack by Blue  had been handily met and repulsed by the Red cavalry. At this point I was ready to call it but the 2nd & 4th Infantry had rallied well and were there to renew the fight. I decided to go the course.

The renewed firefight soon took a nasty course for Red. Having been under fire for a prolonged period with no relief, they were starting to look very shaky when heavy rifle fire broke the gun crew which pulled back to reorganize. At this point  a renewed assault by Blue's cavalry broke the Lancers and almost hit the Fusiliers in the flank. Victory was suddenly up in the air.

A timely initiative win allowed the Fusiliers to face the threat while the Lancers rallied. Colonel Flowerdew  at the head of the Princess Charlotte Dragoons swept away the Light Horse, chased off the Steam Battery and sweeping across the table,  over ran the pack gun and hit the flank of the 4th Infantry. The remaining blue infantry formed square covering the retreat of the 4th and driving off the now blown Dragoons but the squares were in rifle range of Red's infantry and moments later the whole army, now under Brigadier Zinn, the only unwounded Blue commander left on the field,  was heading for home with the tattered remnants of the Blueguard and Light Horse covering their retreat.  . 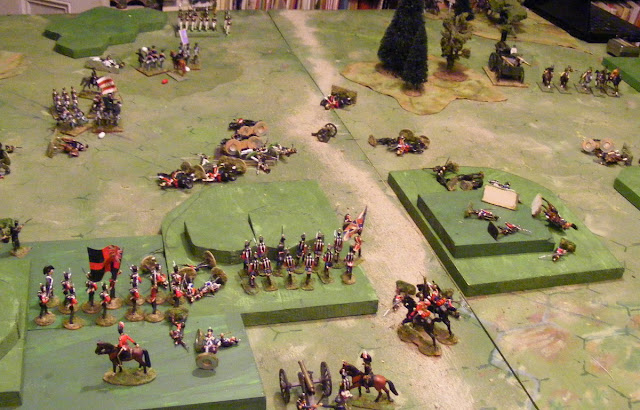 Carnage after a close run thing.
(Disclaimer: No toy soldiers were injured during the playing of this game).

Oh happy day! Atlantica is set. The 20/10 scheme is once again the official plan as are washers for bases and MacDuff for rules. Might have reached that conclusion 5 years ago to be honest if I hadn't been befuddled by organization and basing but then I would have missed the journey.
Posted by Ross Mac rmacfa@gmail.com