Meanwhile, back at the station 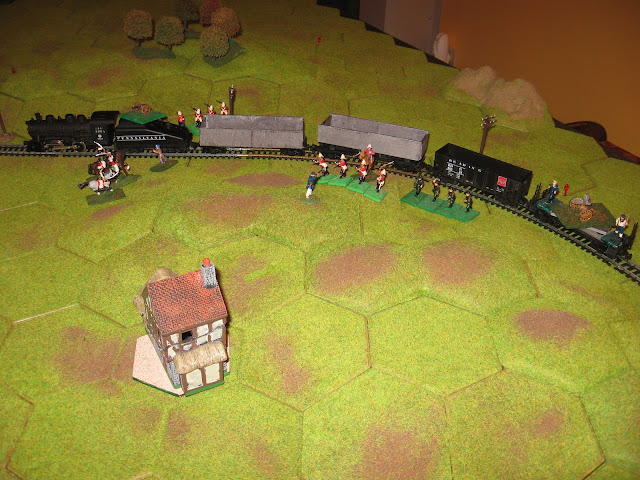 The British roll off the train at the first sight of Afghans.
Ron's Ral Parthas and Minifigs on his Hexon terrain.

Last Wednesday Ron & I had the British and Afghans out again. Not being totally sated with trains yet, I had suggested a train scenario. Ron obligingly ripped apart his daughter's train set and converted 2 cars to armoured troop carriers (in his defence she's living in a different hemisphere and its been in the cupboard for close to 20 years). The rules were once again Battlecry with our own stats for the Afghans (3/2/1 with the option on a flag to retreat a full move instead of 1 hex) The train started at speed 4 and would move at its current speed each turn without any card being needed however a card could be used to accelerate or decelerate by 2. If moving speed 1 troops could disembark as per the scenario. Because the CS Grant scenarios don't always line up well with the left center right thing, we ruled that if you did not have any units in a sector then cards for that sector could be converted to an "on the move" card similar to the new Memoir44 deck. In this case the card could be used to move a unit in any sector but not attack. Due to the small size of the game we decided to play to 5 units/leaders destroyed or the British existing the far side by train.


In the way I am coming to expect, I was dealt a sniped card in my intitial hand so the game started with a pot shot by a lone Afghan  aimed near the British commander. As the train began to slow,  Makpha Khan appeared out of nowhere at the head of his cavalry and made a dash at a train mounted mountain gun. The British responded by shooting 1 Afghan horseman and disembarking all of the infantry. 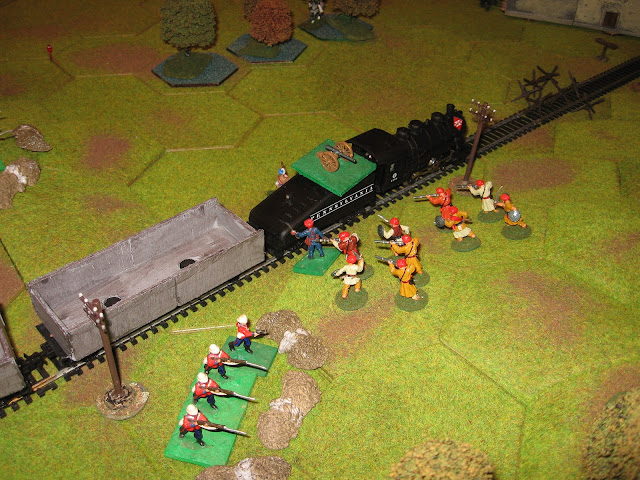 The British build sangars while more tribesmen appear and rush the mountain gun.

I popped up a few tribesmen on the far side, hoping to draw Ron's attention. In a surprise move, he built sangars. This was a choice dictated by a Build Fortification card and a lack of movement cards but in the end it worked well. My plan had been to lure his units into the open and picked them off but instead any move would be against fortified firepower.  The obvious course was to pull back all of my units into cover and wait. 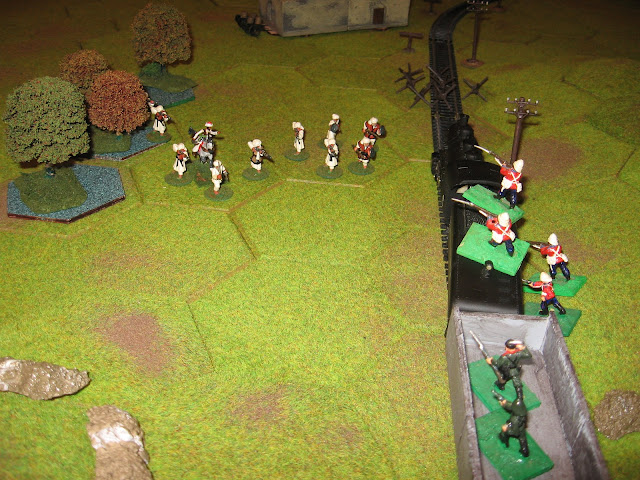 Makpha Khan leads another tribe to its fate.

Yeah, you're right, patience is not my strong suit. I played an Ammo Shortage card and invited the British Commander and the attached unit of infantry to retire for tea while I attacked the train.

The Red Turban tribe managed to capture the artillery wagon and began a prolonged fight with some Gurkhas supported by a platoon of Fusiliers. A fight which ended when the Fusiliers stormed the captured wagon with the bayonet. A second dash at the gun had resulted in the destruction of my cavalry but a reinforcement of infantry showed up and I led the White turbans forward into the gap. 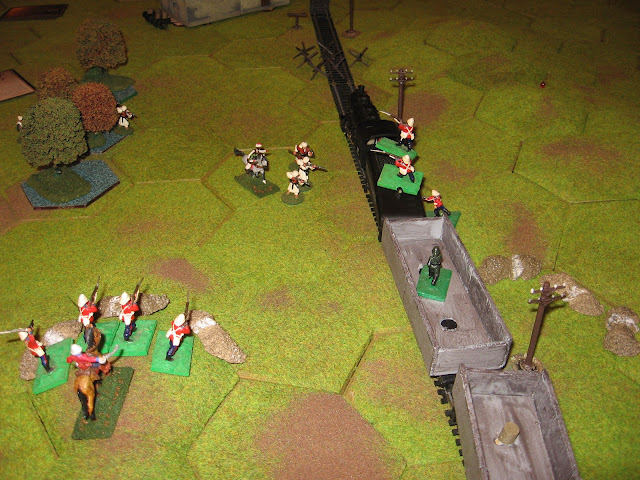 They're back! Makpha Khan leads a last desperate attack.

When launching a combined assault in a Battlecry/C&C type game, it pays to have at least some of the right cards before you start, counting on picking them up as you go is like planning to never fail an activation roll. So, my assault sputtered and fizzed as one unit at a time crept forward and got shot up. For a while the battlefield grew quiet.

It was one of those games where when attacking artillery, I rolled buckets of infantry symbols but when fighting infantry, only artillery seemed to come up but as usual, tactics and choices ruled the day not dice. It had been a fun game, closer than the 5:2 result suggested and had taken us barely 2 hours to set up and play. The afternoon was only 1/2 spent so we changed sides but that's another story.    .