I had been thinking in terms of a Colonial-ish teaser for the 40mm Faraway outing but with the table extension up and terrain laid out, I thought about an outstanding desire to check out Oberhilse & Faraway in the biggest pitched battle I could muster. Without drafting any S&S figures, that came to a Blue army of 6 infantry, 2 light infantry, 2 cavalry and 3 guns defending against 6 infantry, 2 light infantry, 4 cavalry and 3 guns. In addition to the extra cavalry, Faraway had 4 elite units vs 1 and 2 extra brigadiers.  The game was set in the 1850's with all infantry being armed with muzzle loading rifles. Units were 20 infantry or 10 cavalry or light infantry or 1 gun though I ended up running much of the cavalry in 5 man squadrons. 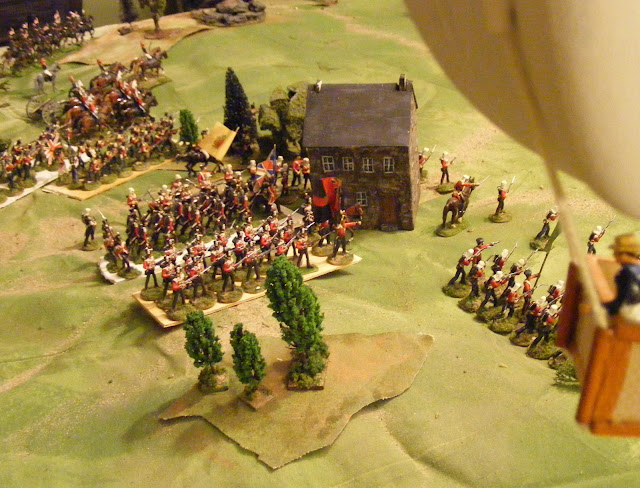 The Red Queen's troops, many still in column on their Proto-shelf trays, advance onto the table.

By the time I had 1/2 the troops off the shelf and onto the table I was thinking, "wall to wall troops, no room to maneuver, no back story, no campaign context, no twists or surprises, no historical original to compare to, not even an opponent to match wits with!". In other words, my least favorite kind of wargame. But it was already Sunday afternoon and I was a bit dragged out for various non-wargaming reasons so I persevered. The good news is that the rules worked fine, well, not quite as good as Charge! for this sort of thing, but good enough and the game gave me lots to think about. 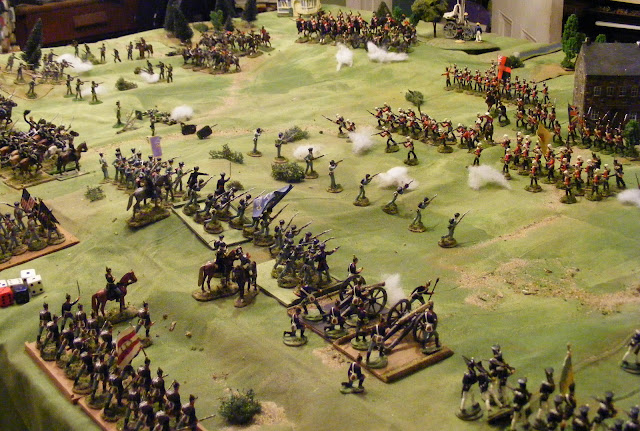 The skirmishers bicker while the Red Queen's army gets sorted before pressing the attack. The Blue Guard can be seen on stolen movement/shelf trays that will allow deployment in line or assault column.

So what happened? Well the pictures pretty well tell the story but Blue deployed with 2 guns and 4 regiments on the ridge, 2 in reserve, cavalry, pack gun and light troops on the left  Red deployed with 4 infantry .and 1 light infantry facing the ridge, 2 elite infantry in reserve, 2 guns supporting on the right, FTC cavalry and horse gun on the left, Queen's cavalry and rifles on the right 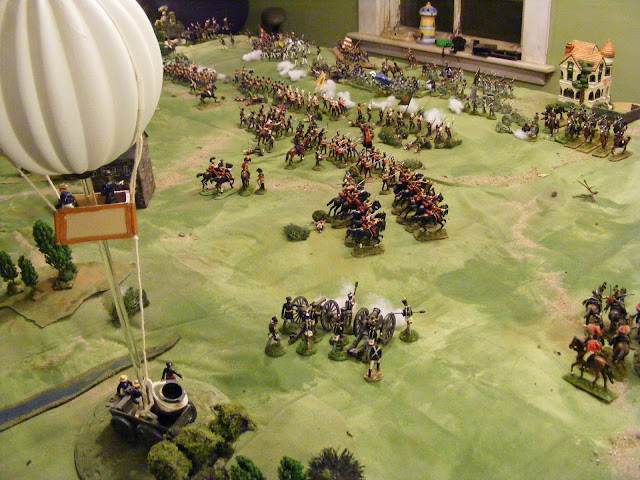 The first line goes in and a murderous close range fire fight ensues. 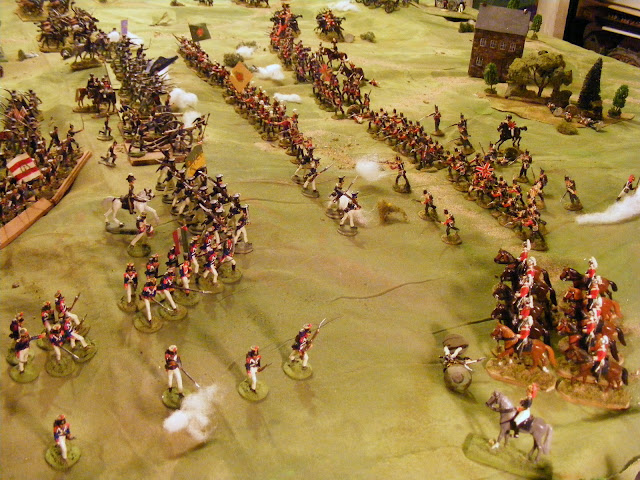 The crochet in the line. The San Carlos and Lafayette Volunteers are under fire from infantry and horse artillery and are eventually broken by a series of charges by the DGBG and Lawson's Lancers.

Gratuitous overview of the continued fighting along the ridge. 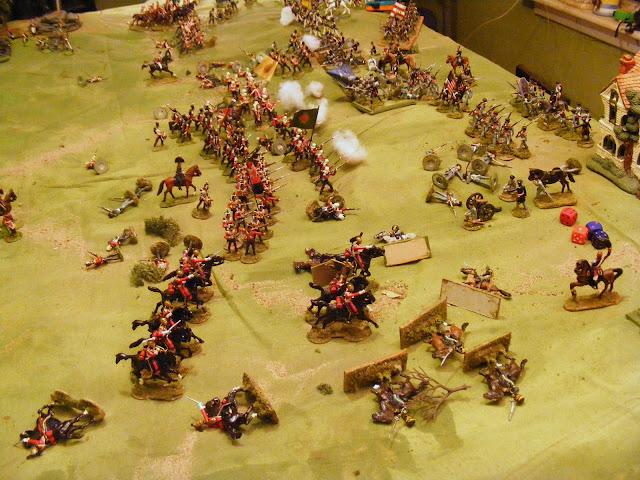 To stop the murderous cannister the Dover Fusilers charged with the bayonet but were halted with a point blank blast and then, as Blue grabbed the initiative for the only time in the game, were broken by a second blast. In the center, the 1st Infantry moved forward to plug a gap while on the  flank the Blue Dragoons attempted to flank the Red line but were met by Red's cavalry and after a series of charge and counter charge were broken. 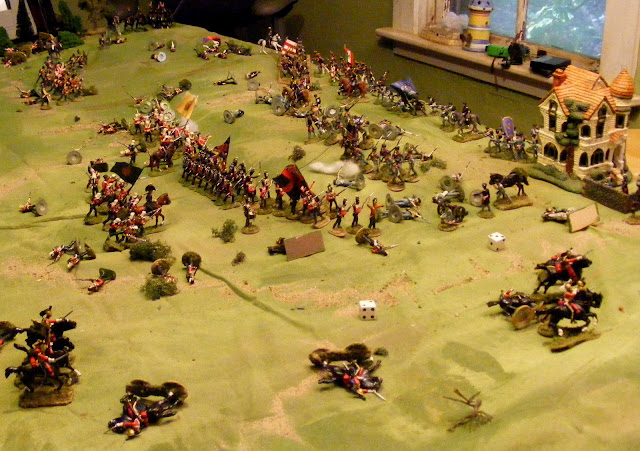 The Blue Guard and 1st Infantry deploy to cover the retreat of the Oberhilse army.

A couple of thoughts.

Numbers of figures vs table & terrain.

There are three main reasons to deploy as many figures as possible. (that's figures as opposed to units) The first is to have an excuse to paint them. The second reason is to conform to a set of rules that you are determined to use and the third is to create a spectacle but that really only holds if the terrain supports it rather than being merely practical and reasonably effective. For toy soldiers that can be properly stylized or by being fantastic in its own right.
(for an example see http://scheckssyw.blogspot.ca/2012/10/testgaming-france-russia.html)

I'm happy with my terrain and the look of my games and have no ambition to go for the dioramic look but its not real spectacle so  to my mind, if say, half the number of figures, would provide as good or a better game then nothing would really be lost except past expectations that called for lots of figures for a "proper" game.

Saturday's 1/72nd ACW game had about the same number of units (16 figures vs 20 figures) but due to the smaller size, looked more appropriate to the space and the terrain. Past smaller 40mm games representing smaller actions also felt more natural in their terrain, even on the smaller table. Keeping in mind that I want each of my various collections of figures to offer something different, that the largest teasers call for about 25% more units, and that several of the units used were borrowed from my 1812 collection or another army, I need to think a bit about scenarios and how I want to organize the regular Oberhilse & Faraway forces for upcoming Colonial games in Northern Atlantica. I think a test game using 1/2 units is in order. That would be easy to arrange and remain compatible with the 1812 organization and allow the full 20 man regiments for any pitched battles that arise, say in a campaign.  Another option would be to go for 6/12 man units for Atlantica calling them companies for typical teasers and battalions for pitched battles perhaps using 1/2 scale or deployed 1 deep.

I also need to spend more time and effort on terrain in 2013, in particular on my none cloth terrain for the 40's.

Movement stands,  surroundings and table .
I have slowly improvised stands for my infantry to get them to and from the shelf but they are not table ready in either shape or finish. That needs to be a priority for 2013. Luckily the same stands will work for the NQSYW armies so mass production can be considered. I also need to spend more time and energy this winter on surroundings. Less time painting figures and  much less in rules and basing, more on finishing painting my room, getting rid of junk, adding and organizing more shelves, expanding casualty holding areas and clearing the walkways to make it easier to move around the table.  The 5 ft x 8ft table is good but it is awkward to move around. I'm going to try a 5 ft x 7 ft and if it works, will make it permanent and round the edges so I don't catch myself on the corners.
Game vs Wargame.
Once again interesting to compare the Battlecry "game" with this one which felt very much like a traditional 70's wargame. More on this down the road if I can sort things .