Major Herald, commander of A Company of the Green Helmets was determined that his men could take out Check Point Frankie once his men had rested and refit. His superiors weren't quite so sure and the next morning he found himself reduced to 11 Platoon Commander while Captain Crescent was elevated to Company Commander. He promptly called for fire support from the Divisional 155 battery but what news photos show look suspiciously like old 25 pounders which may explain their lack of effect.

Captain Crescent sent 11 Platoon up the right to take out the town while 12 Platoon laid down fire support along with the mortars. Unfortunately the radio kept jamming (poor orders dice) and the artillery proved completely unable to suppress the enemy bunkers let alone destroy them while the enemy mortars appeared to be laser guided and their riflemen, apparently well trained in overwatch,  opened up at the first sight of a green helmet. (The red berets had incredible fire and orders dice all game) There was talk of bribery, subversion, international conspiracy, behind the scenes interference by multi-nationals, and so on but the main point was that the supply column still had not gotten through. 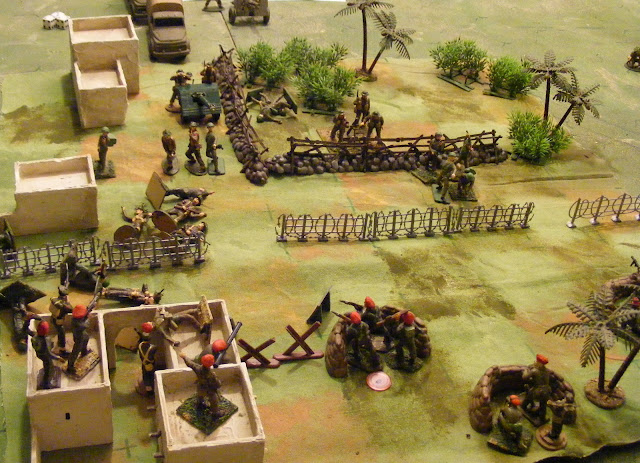 Over night the Internet buzzed and the media raged at the need for supplies to get through. At last the UN relented and while they were unwilling to supply troops, they did loan the Green Helmets  two M113 troop carriers. These were unarmed and lightly armoured but they just might get two sections across the killing zone. 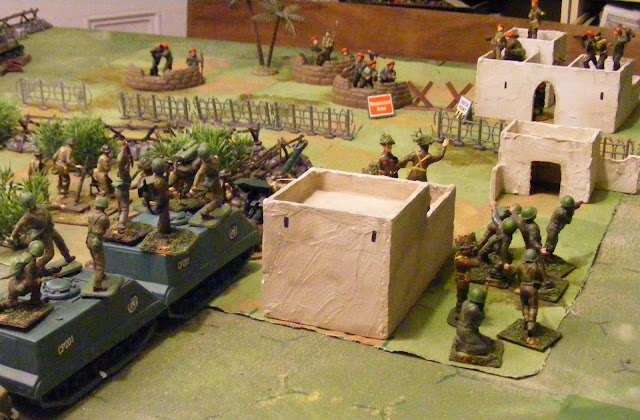 Two sections of 12 platoons clamber on board the M113's before being directed to the rear doors.

All was set, again there radio problems, no doubt made worse by the need to translate for the M113 crew and again the artillery was useless but at least the Red Beret mortars seemed to be off their mark. At last, tired of waiting, Lt. O. Crescent. in command of 12 Platoon, led his carrier forward without waiting for orders from his cousin. 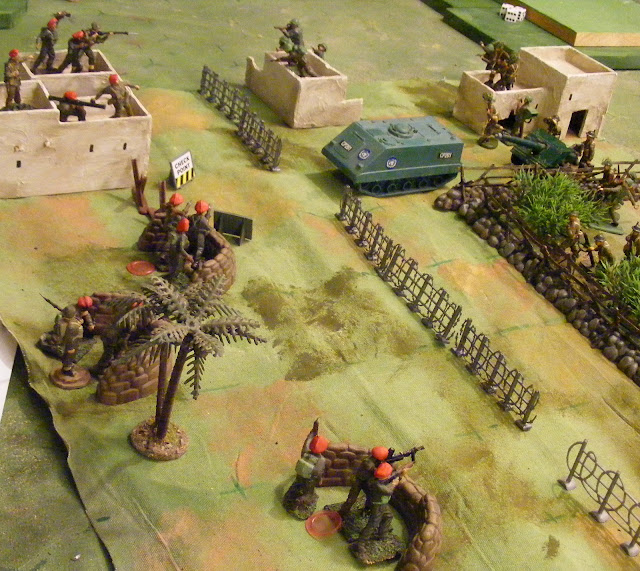 The carriers roll on. The red disks indicate units on over watch.
As the carrier rolled forward on its own, Crescent decided to pull up just out of bazooka range and give the guns a few more minutes. Red's mortar shells and small arms  rained down and one of the carriers was slightly damaged but at last the Green artillery found its mark. Heavy shells mingled with mortar rounds and the enemy platoon was wiped out despite a desperate attempt to rally. The carrier pulled forward to the barricade but before the section could dismount enemy infantry swarmed out of their bunker and attacked them in flank with grenades and point blank fire. Surviving the assault, the section dismounted into a clear area while calling in fire on the Reds now out in the open despite the risk to adjacent friendly units. The Reds soon retreated into their bunker.

The Green Helmets were barely out of their carrier when yet another Red Beret squad counterattacked out of the town and in fierce hand to hand combat was wiped out in short order being too stubborn to retreat  (or too stupid to remember that rule).  The lead carrier pulled back as the next section of 12 platoon raced forward and debussed. They were ordered to finish off the redoubt while Lt Cresecnt led the remnants of his 1st section into the town where Major Airfix's HQ was still holding out. In minutes the battle was over and the road was open. 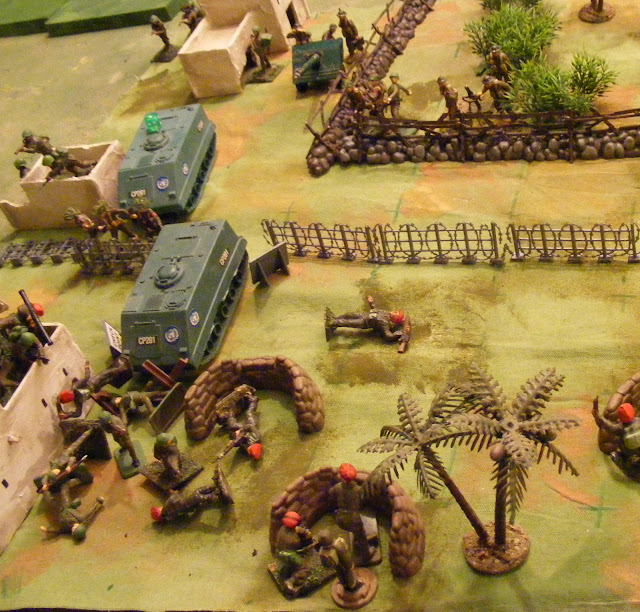 Deadly assault by the Green Helmets in their carriers.

So ended the struggle to open a road through Checkpoint Freddie. Is there a ceasefire in the making or will the struggle go on?  Its hard to say. None of these games took more than 15 or so minutes but all 4 games were fun. The dice, rather suspiciously heavily favoured red in all 4 games despite the same dice being used for both sides. It didn't start to level out till the last few turns of the last game when luck turned sharply. Further Red Green games (uh oh Red Green was a Canadian comedy TV show, now I'm thinking "If you can't be young at least you can be immature", words to live by)  call for some work on troops, scenery and background.

However, on Thursday I once again go on unassisted Elder/Hound care duties which means more time downstairs and less time in my games room. It is no coincidence that this gridded cloth was designed to fit on my mother's old card table which I just happen to have set up in the TV/wreck room where the dogs and I hang out. Hats of Tin, (sorry Steel Helmets is the official title, that may be a struggle) and Roscia vs Naryatria, the Russian Civil War or maybe even the Red Berets vs the Green Helmets just might re-emerge on Thursday.