Give me table lots of table underneath the ceiling light above

A little over  a year ago I cut up some matchsticks to make ACW fences and soaked them in a wash of black paint. As I started thinking abut an ACW  scenario to play, it occurred to me that this might be a good time to glue the bits together and dry brush them.

Acting, as usual, without  a real plan, i started gluing matchsticks together in 6" lengths. When they got to three rails high it felt about right. Needless to say, I didn't actually check this until I was done. 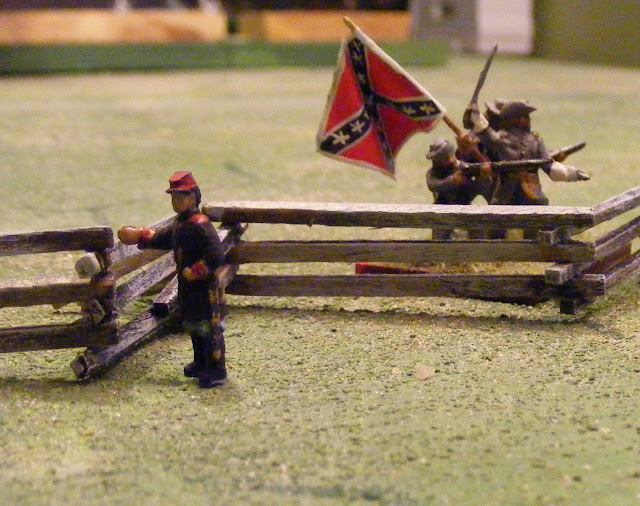 One of the new figures was this officer of the Washington Artillery who had had his base removed.


Turns out it was right for a 1/72nd figure without a base or whose base was sunk in a diorama but with a base glued to a larger group base, the fences look a little short. One option would be to base the fence pieces but then its harder to put the sections together and the troops can't  get close. One section had been made with all short sticks and I had enough left over to raise this to 4 rails which looks too many but the height is right for the bases. I'm out of the longer type of match stick but I think I can get away with  just jacking up the other pieces so that the bottom rail is off the ground.

What a difference 2 bases make. The Union officer behind the fence is mounted on a wooden base.

So that's two feet of fencing done and four to go, or is that forty? In the end it was easy enough but every bit as tedious as I remember. There is a lot to be said for only playing in 1 scale, not to mention the benefits of fighting in deserts.