Did I say too many things at once? 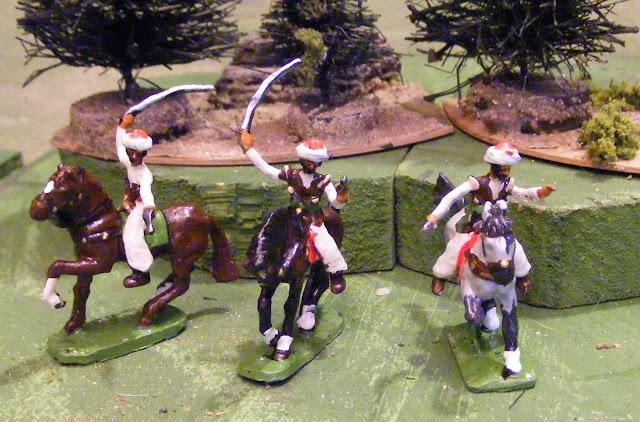 Tomorrow I am heading to Ron's place to take on the mantle of Makpha Khan, the Rose of Kurram defending his tribal lands against the Raj. Having sold off all my 25mm Colonials a few years back, I cast about for something  to add to the game. Ron has Ral Partha Afghan tribemen but no cavalry  and I had some Scruby Mamlukes waiting for painting. They are slightly smaller than the Partha's but not a lot. In fact they are comfortably in between plastics and the Partha's and would fit with either. I mounted mine on some slightly larger horses to better match the Partha and Minifig cavalry they will have to face.

At first I wasn't too impressed with the figures but as I started animating and painting them I became quite enamoured of them.Simple but full of charm and easy to customize.  I can't help but think that they would match Jacklex quite well.   2 more pts towards a 1/72nd Colonial project vs a 40mm/54mm one.
Posted by Ross Mac rmacfa@gmail.com