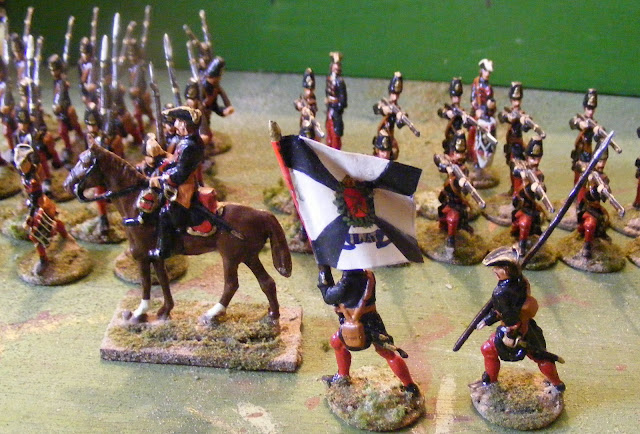 The new colour is trooped so the rank and file can see it.

At last! Something has been painted!  I won't bore everyone with whines about  all the non-wargaming stuff that has been distracting me this fall. Lets just say was -10 Celsius outside last night and felt like my gaming/painting room wasn't much warmer. Winter is coming on apace but at last there is a glimmer of light and heat ahead!

Anyway, late last summer the War of Rosish Succession heated up. One of the outcomes of the Battle of Wentworth Pass was a decision to promote the Pandours from Militia/Light Infantry to Line Infantry by adding 8 privates and a Regimental Colour. That has now been done. In keeping with Rosish tradition, the flag consists of a coloured cross on a white background. (Yes I know Russian and Prussian types will be scratching their heads saying haven't you confused the field and the cross but no this is a black St. Windmill's cross on a white background.).

I just need to cast and paint 12 more Grenadiers and a company of light infantry and the Rosish infantry will be up to scratch. There is, however, some questioning of the decision to form a light company for the Irish regiment and wide spread support for a Light Company for the Pandours instead in recognition of their past service and their origins in the highlands of the frontier. This would not necessarily mean a change in overall numbers but would mean a departure from a standard 4 company organization if there wasn't. There is even support for more National regiments in traditional garb, possibly as a reaction to the heavy foreign influence under the late King.

The 1st National Regiment (aka King Michael Pandours) form as a line battalion for the first time..
Posted by Ross Mac rmacfa@gmail.com