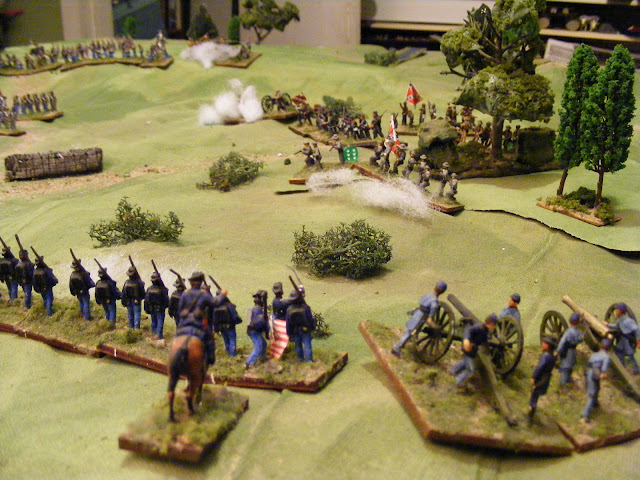 The first game this weekend was an impromptu play test using every 1/72nd ACW stand I could get my hand on. It was played in about 7 different sessions of varying length over Saturday afternoon, evening and Sunday morning perhaps a bit more than 2 hours if I'd gone straight at it. I am just going to give a very brief overview of the battle and then some thoughts and comments on the game.

The Confederate commander, convinced he had a significantly superior force, attacked on converging roads the Union army which was stretched out along a ridge with 2 diverging LOC routes to protect. 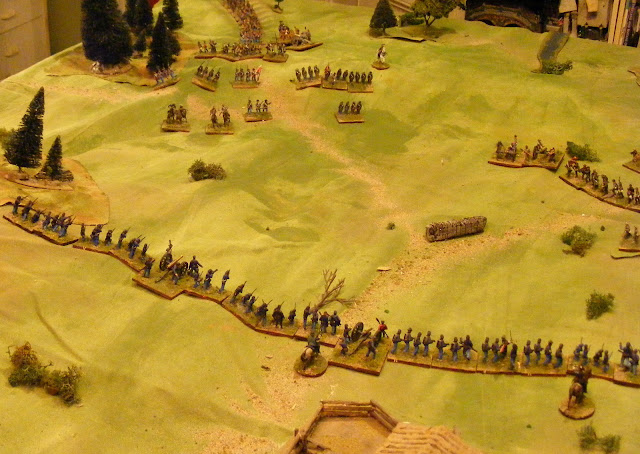 The Rebs about to open fire as their 3 brigades converge.

In short order, three things became clear. The Reb commander had underestimated his advantage, it turned out to be less than 10%  (40 stands of infantry in 10 regiments + 4 guns, 1 sharpshooter and 2 cavalry vs 36 stands, 4 guns inc a 6 pdr, and 3 cavalry). The Union commander was not as stretched as was expected (oops mea culpa). Finally, the diverging LOC roads were close enough to make a central position capable of covering both (oops again). So the scenario became one of 1:1 assault. At least I hadn't let the Yanks dig in.

The Confederate plan was to throw all 3 Brigades against the Union right then roll up their line. It was hoped that the threat of more reinforcements would hold the Yankee right  in place but they cottoned on pretty quick. (Wasn't able to fool myself so I diced for it.). The end result was that 1 Reb Brigade was tied up holding back a Yankee counter attack while 2 more made the assault on the right. 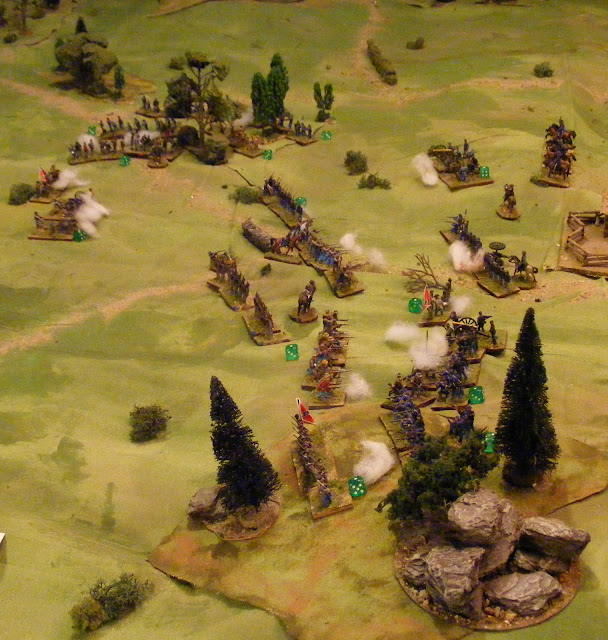 The Union lines under pressure.

There was just enough weight behind the Confederate attack to break the Yankee center and just enough terrain on their left to slow the Union counter attack. Unfortunately, the Rebs had been struggling all day with cold combat dice and at the critical moment, their command dice went cold as well, just as they started to lose units and the Yankee command dice finally warmed up. While the Rebs  paused to rally broken units, and waste powder at long range, the 1st Yankee Brigade managed to rally 3 men and a dog and beat back a dash by the Reb cavalry then pull back their front line and bring up their own dismounted cavalry to form a new line almost on the board edge.  On their right the 3rd Brigade finally charged home and at the cost of their Brigadier broke the Mississipi Brigade despite their new flags. 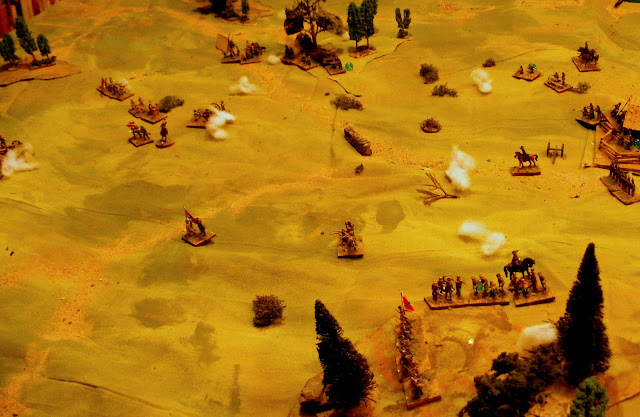 The sad scene at the end of the day.

1. Trying to apply pressure and make use of superior numbers with linear tactics relying on firepower is just as hard as it was in life. Result, a battle of attrition unless some can get clever and turn a flank. Massed attacks can supply weight but will take horrible casualties. Do you know how many rules I had to take out to get this stuff to finally work right?

2. The rule that says routs have to be rallied before command points could be spent on other things worked just the way I had envisaged it helping the Reb attack to stall just as it was breaking through. Too bad that rule didn't actually get included! Damn! Oh well the Yanks also suffered from it earlier so perhaps it was a wash. (Now I can picture the flood of angry letters to the editor from Reb Officers about  why they would have won but....)  Possibly the scattered formations would have had some of the same effect as the string of "1's and 2's" that the Reb's rolled near the end wouldn't have allowed that much of a co-ordinated assault. No need to add any more rules I think so i'll let that one lie.

3. The skirmish line was useful. It slowed the Reb advance  but allowed them to wear down the enemy a little as they did.

4. The Reb infantry dice for shooting and melee were horrible! . Once within close range the Yanks shot the heck out of them. Typical sort of rolls. Six 6 dice for 4,5,6, Yanks 4 hits, Rebs 1 or 0 hits. Same dice, same thrower, all evened out over the game if you add both sides. That why we use dice I guess.

.5. Nice to have real artillery that can shoot across the table! Esp the rifled guns though the Napoleons are great at point blank canister range.

6. That canvas cloth is too stiff and heavy, it doesn't lie right over the bones of hills and due to unintended and changeable stiff wrinkles, is awkward to place terrain features on let alone troops. It also blocks access to the storage under the table that holds scenery, dice, markers  etc. Quite annoying really. My old, frayed  soft cloth was better if too small. The larger table was good though.

7. To make the game run smoother, I need more logistical preparation. Even the marked Reb stands got mixed up if the uniform or pose wasn't distinct and the dice hit markers wandered and there were never enough at hand. I also ended up with casualties stacked every where since I was backed into 1 corner of the table, the widow ledge filled up and it was too time consuming to negotiate my way around the table with each stand removed. There are solutions for all these things but the work needs to be done.

8. It was interesting to note the difference in feel between this game, not a large one by any means but some 350 figures in some 30 units representing some 10-12,000 men which essentially crawled  down the path it was set on quite early towards a final conclusion with some tension and some need for decision but not alot each turn with Friday's game of the same or slightly longer playing time with just over 100 figures in 20 units representing, maybe 1,000 where the excitement and action/reaction was constant. Also, no markers were needed in that game.

Right, Oberhilse has just occupied the ridge, I'd better go see what the Red Queen can muster to get them off it then re-read MacDuff, before the game instead of after.