The scenario I chose for this weekend's game was Broken Ground, Scenario 2 from CS Grant's Programmed Scenarios. After a bit of contemplation I decided that if I was going to use the Scots, it was most appropriate for them to defend against an English invader. A perusal of the force choices crossed with the available troops led to the following armies:

Left Wing: Earl of Douglas  with 6 units of Scottish pike
Border Horse: Lord Home with 2 units of light cavalry lancers
Center: The Rhinegrave with 8 units of Landsknecht pike and 2 of shot.
1 Heavy Gun
Reserve: Le Compte de St. Lambert with 1 unit of gensdarmes and 2 of lancers
Right Wing: Earl of Argyl with 4 units of Irregular swordsmen and 2 of irregular archers.

The Allied army deployed first. The plan was to adopt a central position with a smaller force of Scottish pike to hold or at least delay the enemy on the left while the Highlanders took post on the far right ready to flank an attack on the centre or to thwart an attempt by the enemy to swing around to do the same. The small amount of cavalry was held in reserve. It seemed a sound enough plan on paper but alas, the Duc has been commanding too many continental armies recently and did not make sufficient allowance for the lack of firepower in the Allied army made worse by the English having snapped up the vast majority of available mercenary arqubusiers in addition to their own archers. Normally I field 3 pike and 1 shot for each Grant scenario "infantry unit" and 2 shot for each "light infantry unit" giving me close to 15% over all but I ran out. I should have used my Scots arquebusiers for play balance. To make it worse, while setting out I accidentally checked against with list 8 and only fielded 1 gun instead of the intended 2. This was to have consequences. 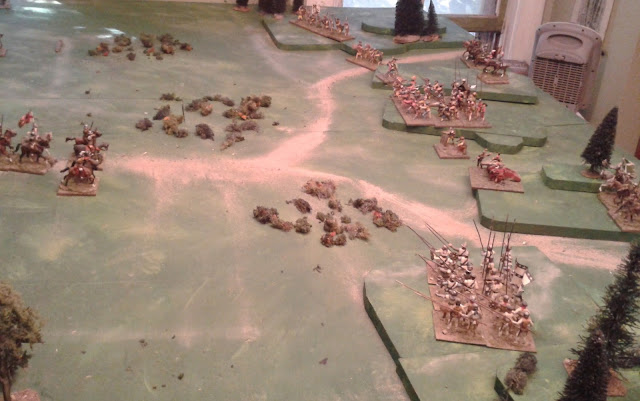 
The English had to roll to see if the Border Horse and done their job and they hadn't. No recce, the army had to march on in column. 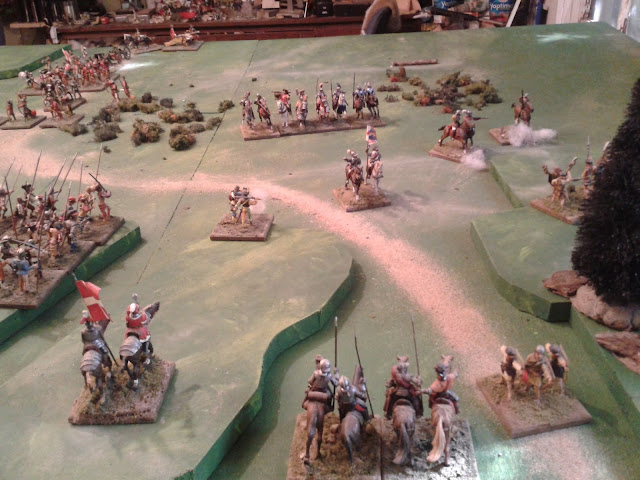 The allied centre is "amused" by the English light cavalry while their infantry slowly deploys.

Its always the same old problem for the Scots, especially if they have minimal French assistance. If they sit on a hill, the English will shoot them to pieces before driving off the remnants but if they attack too precipitously, the more mobile English will surround them and hit them from the flank as well as peppering them. It calls for careful timing.  Having the English arrive piecemeal in column was a good opportunity for the Franco-Scottish allies to launch a swift and decisive all arms attack to smash the vanguard before the rest could come to their aid, something their general spotted right away .......after the battle was over............ . 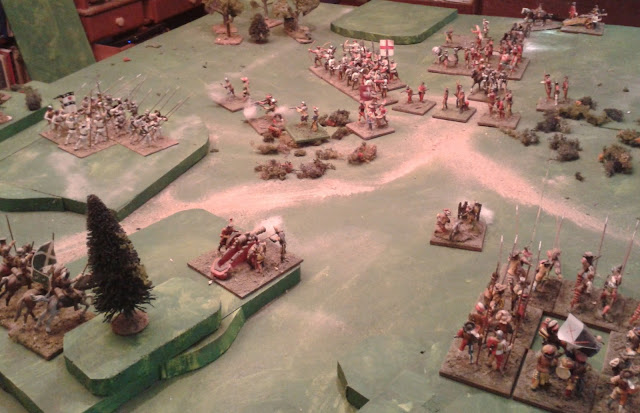 The Scots pike are hit hard by arquebus fire leading to a summary decision to revert the "to hit" roll back to the usual 5,6.

The English mission is to capture all of the high ground over looking both of the roads. Essentially they have to rout the enemy. Looking at the Allied deployment, the Earl of the Belmont decided to send the cavalry to threaten the enemy right until the time was right to sweep away the Highlanders and flank the Germans. Since said Germans made a nice deep artillery target and had a small skirmish screen, the artillery would deploy in the centre to pound them backed up by arquebus fire. The mercenary shot were already harassing the Scottish pike so they were ordered to disengage and move to the centre. That left the 2 divisions of English infantry. The first was sent to drive the Scottish pike off the hill with the second hanging back ready to go either right or up the centre depending on events. 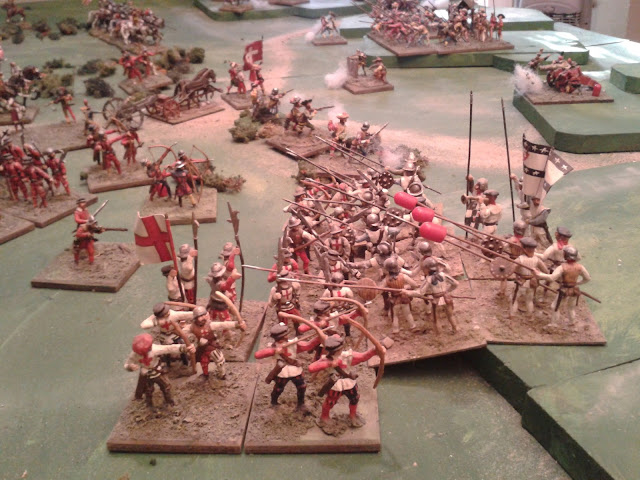 Having endured a steady rain of arquebus and bow fire, the Scots find the English foot at hand and charge downhill, almost driving them back.

On the Allied right the Scots pike took a terrible pounding from arquebus and bowfire but at last the English got close and the Scots charged. The initial charge downhill was their best shot but they needed exceptional dice to rout the English and they only got average. A protracted struggle with heavy losses on both sides ensued before the Scots were finally driven back. Rallying against the odds they seized a shift in initiative and charged back in driving back the English. It didn't last. Falling back in good order the English concentrated their archers and shot apart the final stand of the Earl and his retinue.

On the far flank there was protracted skirmishing between Highland archers and the mercenary mounted arquebusiers back by the English Borderers while the first English gun finally deployed and opened fire.

Realizing at last that he needed to act, the Duc de St. Lambert joined his French cavalry and ordering Argyll's Highlanders to support him, advanced and charged the English cavalry while the Landsknechts were ordered to over run the enemy guns and then wheel to take out the last intact English battle.

The tremendous shock of the cavalry clash resulted in the destruction of both cavalry wings and the wounding of St. Lambert (oops the double dice charge bonus was supposed to be just against infantry). The way was open for Argyle to wheel his clansmen and drive off the English skirmishers but being on his own, it seems that he wasn't willing to risk his men to save a pack of Germans or some Lowland town (a series of 1's on his "out of command" rolls). 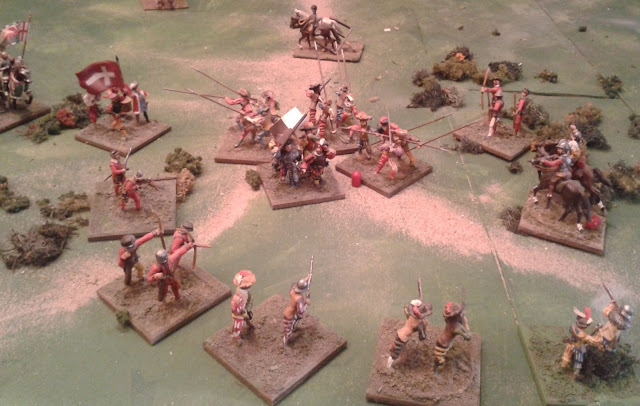 Alone, surrounded and reduced to 1/2 strength, the Rhinegraf plants his halberd and opens negotiations.

There was only one real problem with this game. I meant to set it up and play the next day, or after supper but once it was set up, I was curious so I played one turn, then another and another, then twice I was going to take a break but I wanted to see what was going to happen. Three hours later......oops late dinner for every one.

So, YES! A successful reappearance for my 16th C lads and just the sort of wargame that I had had in mind. There were a few small issues with the rules, shooting was a bit more effective than planned as were the highlanders, the cavalry vs cavalry charge too deadly and there was nothing to stop an army from fighting to the last stand,  but over all they worked well, especially for a first run through. The initial rules post has been updated to reflect mid-game changes.

Now I need to add enough Scots to fight on their own as well as increasing my French troops and adding some crossbowmen, and then there is my one, lonely stand of Turks.....