Its a Jungle Out There

We interrupt your regularly scheduled blog entry to report breaking news on an outbreak of hostilities in the side yard. 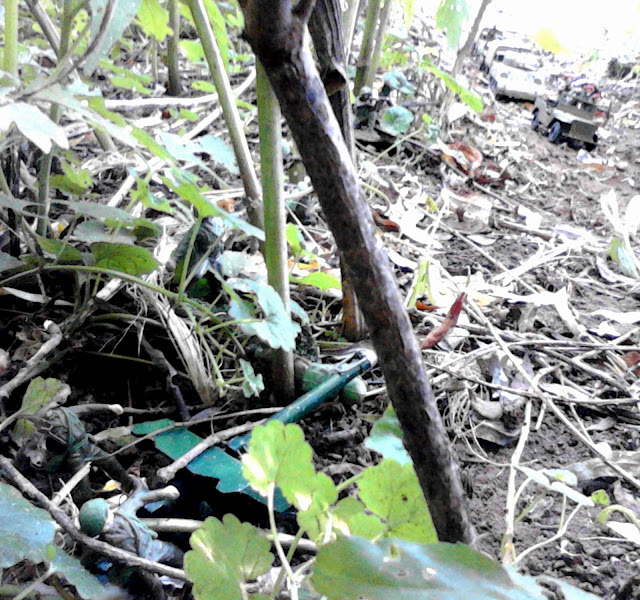 Where's Waldo?
The Green Helmets turn out to be better camouflaged than I thought. Apart from the 2 man B.A.T recoiless rifle team, there are 3 riflemen, 1 bren gunner, a grenadier and a 3.5" Rocket Launcher man at least partially visible in their ambush positions.

With August has come at last, a break in the weather. Conditions were perfect for a game out side. At toy soldier eye level, our various bits of yard look more like jungle or desert than green fields but it suddenly occurred to me that  I had just the toys upstairs and some of them have even done backyard fighting before. Its close to 50 years since their last outside go but toy soldiers don't forget.

The last time that the Red Caps and Green Helmets fought, it was on a grid so I was going to need new rules, something dead simple. It took about 5 minutes to come up with the following based on my usual habits:

Tank/Recoiles Rifle. line of sight range. vs AFV 1 die 5,6 to hit. vs inf place burst circle and roll 2 dice 1 under, 1 over. Move circle and throw 1 die vs @ figure inside circle to hit as above. Bazooka as above but 6" range. Mortar as above but not vs afv. May blind fire for 6's.
Hand to hand: 1 die per figure, high score wins.
Morale.  Side dropping below 50% must retreat unless dug in. 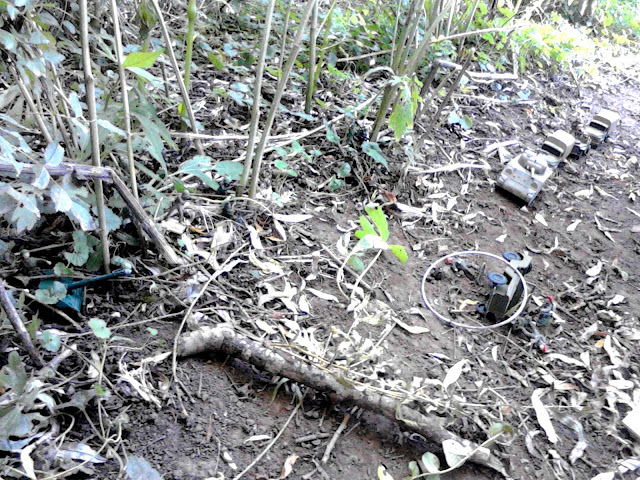 The Jungle erupts!
I know there are in excess of a dozen Green Helmets deployed but I can only find 11.

The game saw the Green Helmets with a Platoon commander with bazooka, MG, lmg and about a dozen riflemen in ambush. The Gun commander deserted before the action started. Once the game was over he was tracked down and arrested 3 feet away. No idea how he got past me. The Red Caps had an advance party of 3 riflemen in jeep followed a foot later by a tank, a truck with 3 riflemen and a bazooka, a jeep with officer and radio and a truck with 3 riflemen and a 60mm mortar.

The game began Red going first and rolling 2 d6 vs the range in inches to spot the ambush. They rolled a 12 and I over ruled it and threw the rule out. The game resumed with Red driving full speed ahead down the jungle road. Green opened fire with the BAT against the jeep using HE. The round lasted close enough to knock out the jeep and 1 riflemen. The woodline erupted with small arms firing bringing down 1 more. The bazooka opened up on the tank which was just in range, but missed.

Red went first again and the tank blasted with woods with MG fire taking out the bazooka while the lone rifleman of the advance guard brought down one of the gun crew. The rest of the troops debussed. White finished off the advanced rifleman but with the gun officer missing, no one was willing to move over and recrew the gun. One riflemen did dash forward and pick up the bazooka. The rest began to redeploy to the left and the platoon commander brought up the 3 man reserve.

Who would fire first, tank or bazooka? White won the toss and the bazooka came up with a 6 knocking out the tank. The riflemen around the commander continued to work their up through the jungle while the rest kept their heads down. The Red caps rushed for the cover of the jungle while the mortar zoomed in on the bazooka, probably aiming for the flash and landing dead on (+1-1 for aim, 6 for the kill.) .

As the opposing riflemen met in the jungle,  a  close range fire fight ensued lasting 2 turns  and showing why green helmets are more appropriate for jungle fighting than red berets! The handful of remaining Redcaps bundled into a jeep and high tailed it. 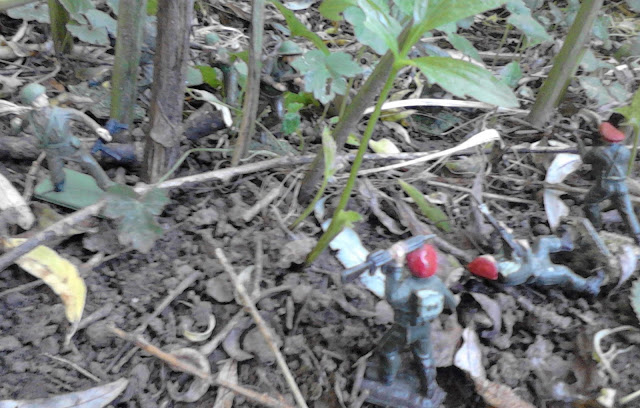 Four greens take out 3 reds in a murderous firefight.

We now return you to the scheduled Adventures of Prince Michael game.