Eric the Redleg and another band of bloodthirsty raiders joins Helgin's host. 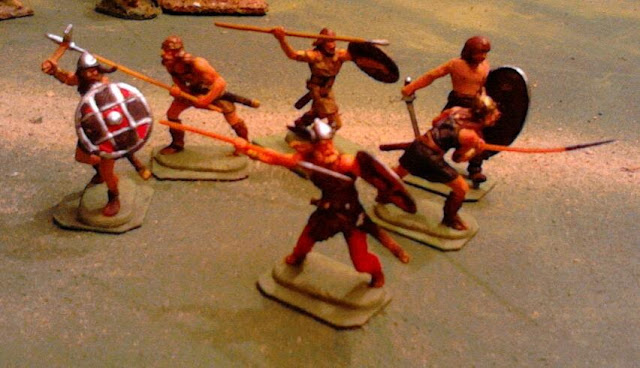 One might notice one rather large and old fashioned Celt joining in, a sample from Irregular received almost a decade ago when I ordered some ECW Scots. I stumbled on him today and thought "close enough, time to join in lad".

When I was putting the rules together, I had originally intended to base combat on groups of 4 as in Rattle. I stumbled over heroes though who were being given 1 die per power. Worked great in mass combat but in duels, both sides suffered too much. I contemplated a different mechanism but opted to go for MacDuff style combat instead which had been a close 2nd choice anyway. However, along the way I lost my shieldwall rule and thus any advantage for heavy infantry in formation. I had thought about closer basing for heavies but my own figures are all based the same. Since the slow speed of even unarmed heavy infantry is meant to reflect their close formation, I think I will just give them the same +1 that the HC get, but only to the front and not in bad going.

I'm also uneasy about the lack of an evade rule since I'm used to having one but Charge doesn't have one so I'm going to stick to my guns and try it.

It also occurred to me that one needs to make allowances for Bishop Germanius and the Hallelujah chorus. In essence priest will need to be treated as magicians but without spells, just prayers, preaching and of course, loud choruses of Hallelujah to frighten the enemy.