The translation of thought from the subconscious to the conscious can be a murky process at times. I will be Duty Caretaker Spouse for 3 days this weekend and 4 the next. This means I can't wander off for more that a few hours but doesn't stop me from enjoying several hours of leisure time packed around my responsibilities and the weather has finally relented making my games room once again a pleasant place to paint and play. So, a game is in order. But what to play? 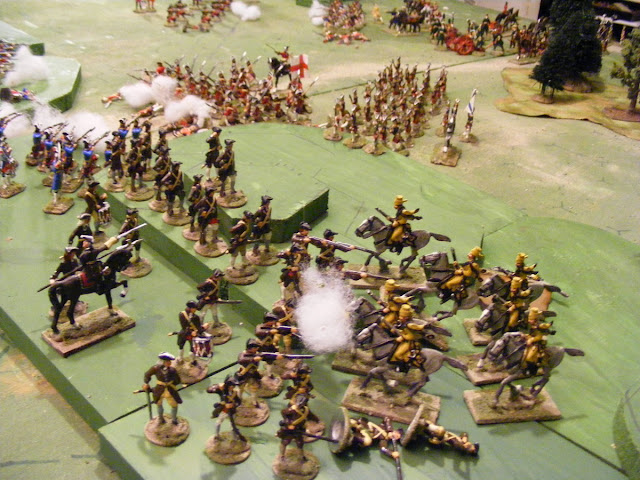 An archive shot of a NQSYW battle on a similar weekend last fall.

The games I've played over the last few month have been enjoyable but were either what I consider skirmishes or petit guerre,  or they have been short games with simple scenarios and limited player options. My subconscious passed the message "I want the wargame to be a real battle this time". But, what did it mean?? 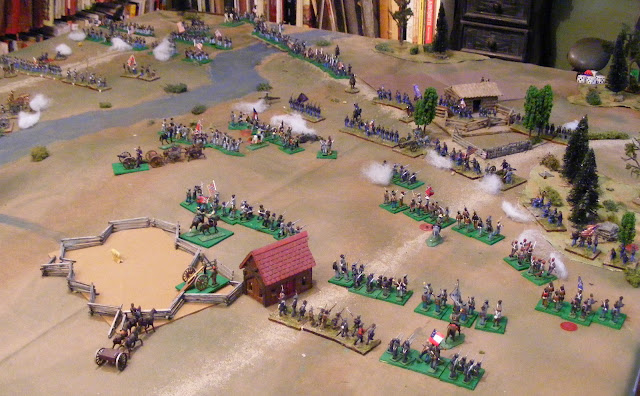 At first I thought it might be about fielding masses of units and figures without being crowded.  The spectre of me interrupting things to order and paint a thousand 10mm French Revolutionary soldiers loomed large causing me in near panic to set out some 1/72nd ACW to remind myself that compared to my 40's they fit well into the scenery and I can fit quite a few onto the table without being crowded. (whew! bullet dodged). But while the 500 or so figures I had put on the table for the Not Really Pickett's Charge game a few weeks ago don't constitute a big game by hobby standards, it was most of the painted ACW figures I have and considerably more figures and units that the various small games I've played since, however, it didn't have the "feel" I was looking for since it was just a slice of something bigger and mission and deployment were pre-ordained.

So, I thought a bit about planning and generalship and the to and fro of decisions and the test of minds and wills between opposing generals.  A battle where the general/player  develops a battle plan, where to attack and with how much, where to defend, where to place reserves, followed by the see-saw of attack and counter attack, phase after phase through a whole day until one side collapses and is chased from the field.

So I went looking for an historical battle to base the game on but it didn't take long to realize that relatively few historical battles offer the sort of sweeping manouvers, chess like control by the commander and give and take that I was thinking of. No, it seems what I really wanted to do was fight a wargame like in the good 'ol days when a game involving a few hundred miniatures felt like the clash of mighty armies deciding the fate of nations. 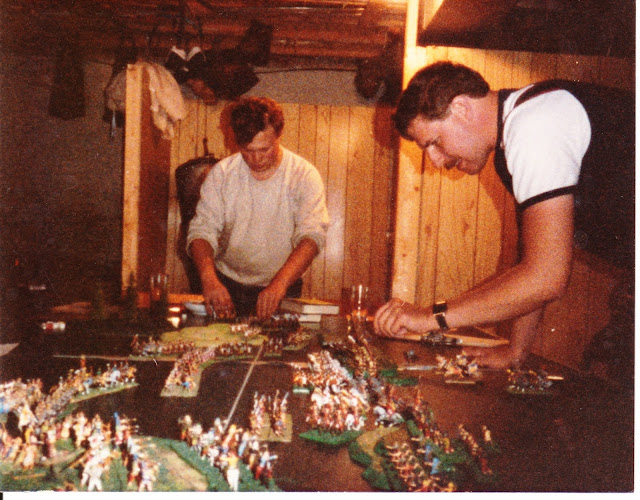 The Seleucid Menagerie of Perry Grey faces the Persian Horde of Rossius the Younger in Jeff Lauzon's basement some time in 1980's.

OK then it seems I just need to lighten up, stop thinking  about the man behind the curtain and whether or not that group of soldiers should be a brigade or a battelion, and pick the right sort of scenario. I think  Grant's Broken Ground Scenario from Programmed Scenarios will do as a start thus saving my brain from further strain but what about armies? ACW? Oberhilse & Faraway? NQSYW? or maybe the long idle 16thC English vs French & Scots? hmmm choices, choices...... 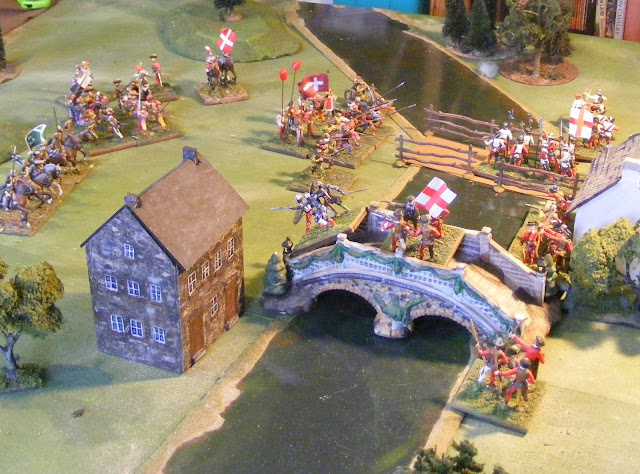 Archive footage of a 16thC battle from December 2010. Its been nearly 18 months since these lads were out, the longest idle period of any of my major collections.