THE ADVENTURES OF PRINCE MICHAEL: EPISODE 13 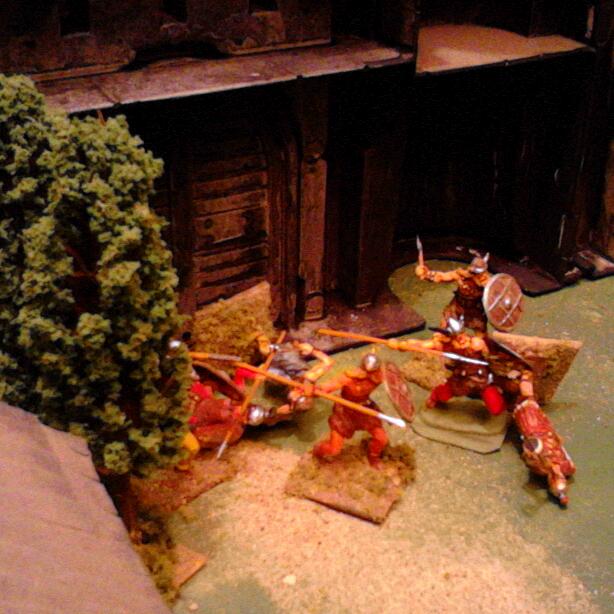 As dawn approaches, the gates of the town swing open as a small advance guard of Saxons and their allies rush forward. At each gate, 2 of the guards remain loyal. One sounds the alarm while the other rushes to close the gate. Bitter hand to hand combat erupts but at the West Gate, the arrival of Eric Redlegs tips the balance. Without pause, the bold raider leads his elite advance guard deep into the town. The way is open for Helgin, the infamous Saxon leader. Not a soldier of the garrison remains to oppose him. 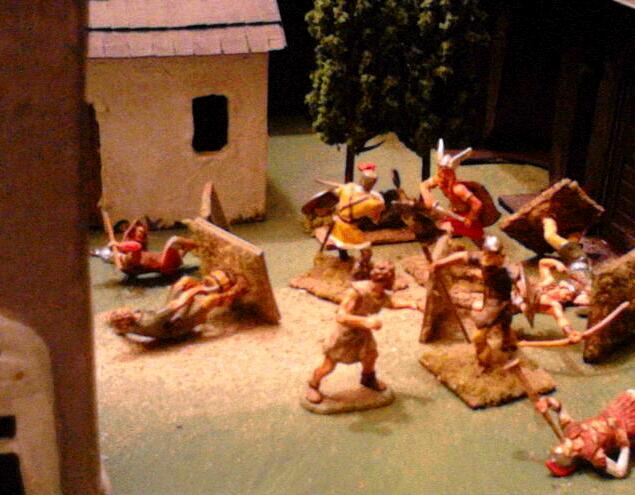 Suddenly, Helgin finds his blocked! Prince Michael, en route for Belmont had been sleeping at the inn. Awoken by the commotion, he was soon armed and,  calling all able bodied men to follow, rushed to the defence of the town. A terrible blow from the ostler's fists laid one Saxon archer low but without arms and armour it was a hopeless cause and all were soon struck down leaving Michael to meet the powerful Saxon chief sword to sword. Fierce and heavy were Helgin's blows and the young hero was outmatched. Driven almost to his knees, one more blow would finish him and leave the road open. Where was the garrison? 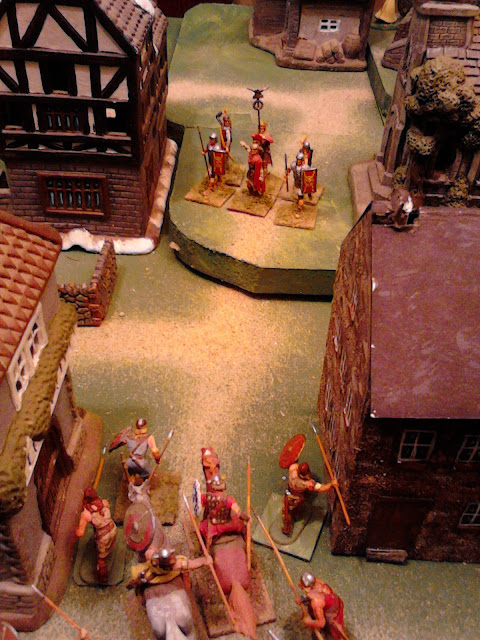 Across town at the South Gate, the loyal guards were swiftly slain and the gate secured but the expected advance guard of Picts was nowhere to be seen. Spurring his horse forward, Dearg Mor soon arrived, a strong force of spearmen at his back. At last the archers emerged from the wood but still reluctant to move, they opened a desultory fire on the catapult crew in their tower. Rushing forward through the streets, Dearg and his men came face to face with Tribune Johan and a handful of soldiers blocking the narrow road where it climbed towards the keep.

Rushing forward, the lightly armed Picts threw themselves against the shield wall, but were held and then driven back. Both Dearg and Buidhe were wounded and paused to draw breathe while their men charged again cover by a shower of javelins from a small party that had passed up the next street. Suddenly, the tramp of hobnailed boots could be heard from the north and a another troop of soldiers appeared behind the javelinmen! The Picts had barely time to turn before these new soldiers were upon them. Four well armoured soldiers against three nearly naked Picts, the result seemed certain but the men of the garrison were barely awake and unused to warfare while the Picts were battle hardened raiders. In a moment three soldiers lay dead and the last one had fled in terror.  Only the Tribune and two soldiers still blocked the road. Riding to the front, Dearg Mor called upon his men to follow him for a third assault up the hill. 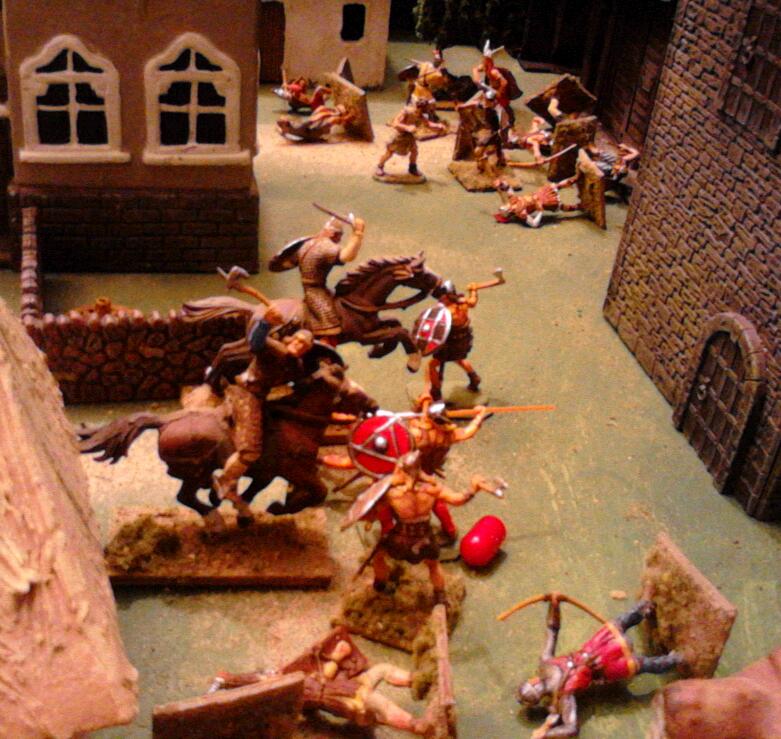 To the west, Eric Redlegs' drive into town got as far as the market place where it came up against a tight knot of garrison soldiers, armoured swordsmen to the front, archers behind. Drawing themselves into a tight knot, the Saxons charged. It was over in seconds. Eric took a blow but the soldiers were cut down or fled. The way to loot was open!

Suddenly from behind the Saxons came the thunder of hooves followed by lightning in the form of the swords of Sir Bors and his squire. Driving into the Saxon flank, they cut down Eric and another raider, chasing  the remnants back towards the gate. Spying Helgin's winged helmet, Sir Bors pushed into the mass. Two mighty blows he rained upon that helmet while his squire hewed at the masses. Suddenly the Saxons were falling back through the gate with the knight and squire close upon their heels.

Outside the gate, the two horsemen were faced by more than a dozen Saxons, rallying now into a tight shield wall. As his squire was swarmed by Saxons and brought down, Sir Bors laid in left and right clearing a space. Behind him came a call, Michael, overcoming his wounds, had staggered to the gate and was pulling the last one shut.  Sir Bors slipped inside as the gate closed. As the bar dropped into place the Saxons began to pummel the stout gate from the other side. 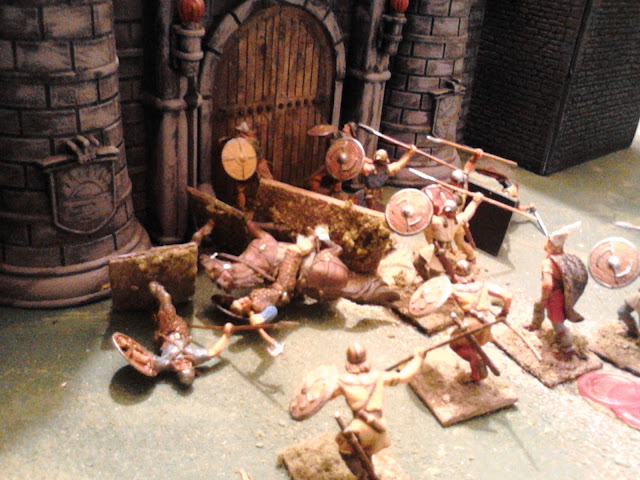 Leaving Michael to hold the gate, Sir Bors galloped towards the South gate whence came sounds of continued battle. The last charge by Dearg Mor had led to a bloody melee and the wounded Tribune had been forced to recoil, left alone to hold the road.  Suddenly the last troop of garrison soldiers appeared at a run. Putting himself at their head the Tribune led them in a charge that swept away the Picts. One thought  took them all, back to the woods and safety! 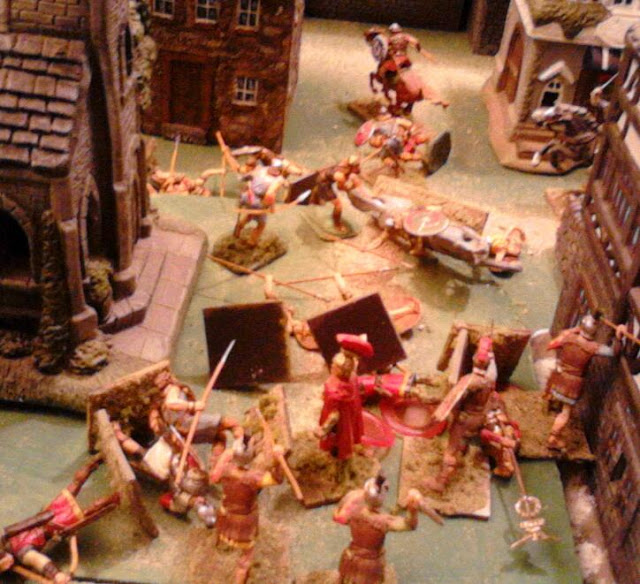 Tomorrow, a more technical look at the game.
Posted by Ross Mac rmacfa@gmail.com