The weekend approaches, the continuing unusually hot temperatures seem to be relenting a little, the old sub floor in the kitchen of this old farmhouse has been stripped off and Kathy is off to a dogshow. In other words conditions are just right for another solo game. 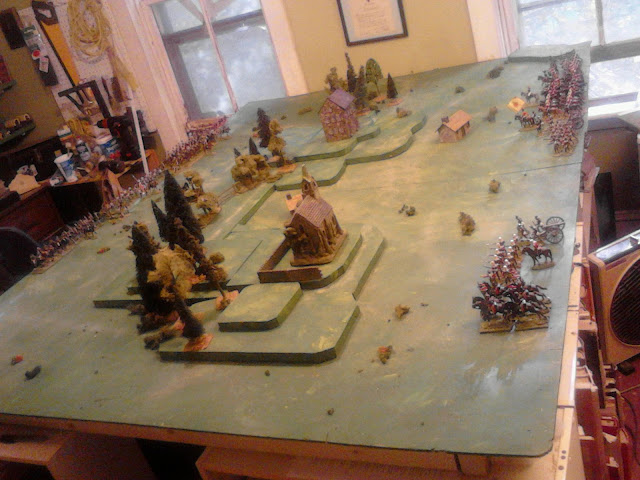 Red and Blue armies clash at Long Hill, Victoria Farm on the far hill, Cross Church on the near hill.

Last week's game coupled with a recent post on the  http://thepennywhistle.blogspot.ca/ blog disturbed sleeping  memories of past Morschauser/V&B like games where a stand of 40mm or 54mm figures is a unit, even if its just 2 or 3 figures as well as bringing back to the fore my pondering about how many figures/units I can field without overcrowding the table, preventing maneuver and securing flanks on the table edges. In an effort to stifle the thoughts a little, I decided to throw a small game of either MacDuff or Rattle of Dice on to the table  using small 12 and 6 man units.

I was a bit tired with a long non-wargaming to-do list  so rather than spend time and energy coming up with either an historical action or an interesting scenario I just plumped for a quick encounter game such as one might find in an old wargaming book. 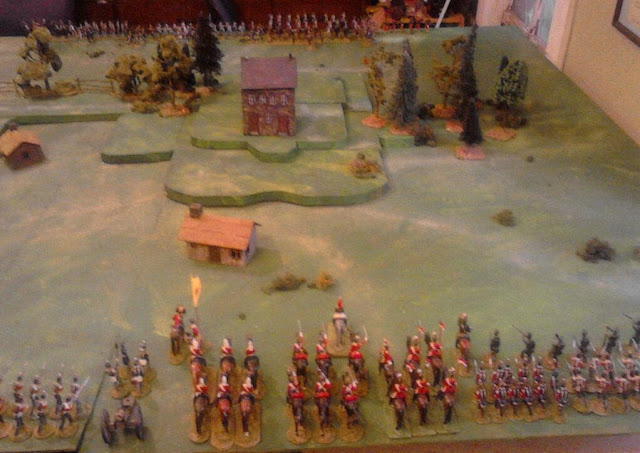 Depending on how things go, the game will be played either Saturday or Sunday. Next weekend will see the return of Prince Michael.
Posted by Ross Mac rmacfa@gmail.com