89th Foot Out of the Goo 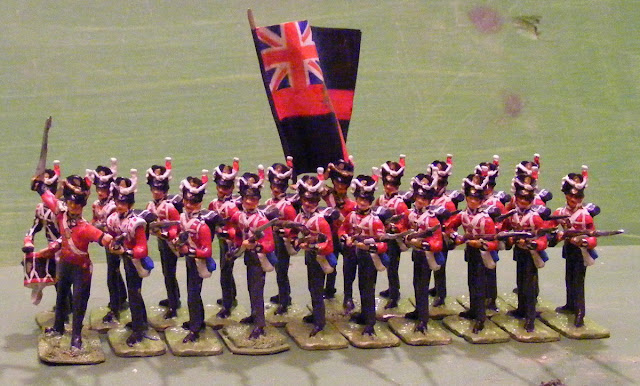 Here at last is the first 20 man battalion of shiny toy 1812 figures. I was toying with using the Charge organization with a stand of colours per "Brigade"and with the drummers not counting but have decided to go with 16 privates, an Officer, Sergeant (corporal here), Drummer, Ensign  for a total of 20, all counting.

The privates are listed as US infantry on the Historifig site but they have British packs and Shako's so I have painted them as British.  There was no officer, so I took my officer figure, the original in shell jacket, slimmed him down to fit, added coat tails and modified the pose to have the sword arm lifted. For maximum compatability, rather than changing the forage cap into a Belgic shako, I used one of the Scruby heads.

Once he was as ready as he was ever going to be, and ensconced 1/2 way in Plasticine,  I opened up my rtv  Silicone to make the mold and #@%#@%$#@%$!!! instead of being liquid, it was the consistency of silly putty. I'm not sure if I some how let a minute amount of catalyst into the can or if was temperature or?  This was the first (and last) can of the Alumalite brand that I have purchase. After an intitial wave of dispair, I scooped out a quantity and added catalyst. It was too thick to stir so I kneaded it together and pressed it over the master.  It normally takes 6-8 hours to set but only about 20 minutes this time. Stil lit seemed ok so I flipped him over and did part too.

The detail is not exactly sharp but I've done much worse, and there are no air bubbles! His pointing finger was lost but even the sword almost came out! 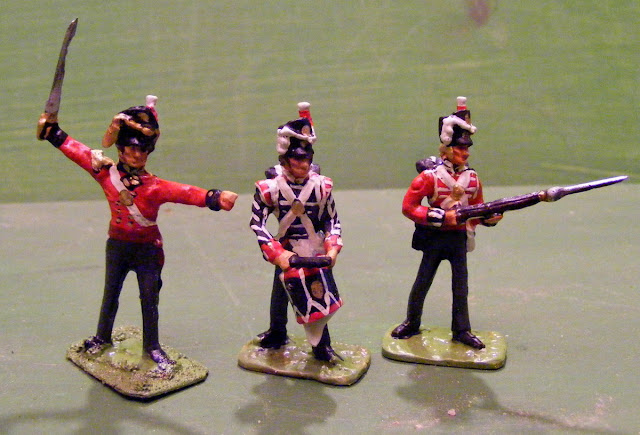 Home made officer (also used as ensign with colour in right hand), private converted to drummer, original Scruby private. (Of coursefor the photo I picked probably the only one where I missed filling the arm plug.) The drummer is just a private with the musket cut off, drum added and arms tweaked a bit.
Posted by Ross Mac rmacfa@gmail.com