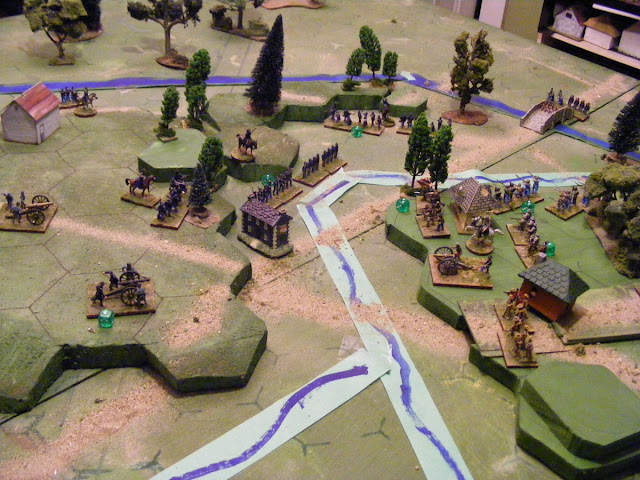 If shooting at Cover or if attacking uphill or over an obstacle in assault: cancel 1 hit per attacking unit.
Infantry and artillery can take 3 hits, cavalry can take 2.

However, I'm not sold on PIPS or the straight Igo-Ugo. I have tried PIPs a couple of times in the past and they do have an attraction as a game mechanism but they can have a big negative impact without explanation. Plus the turns seemed to rattle back and forth so fast when pips were low that it was hard to keep track, it all became a blur.

One option I am thinking about is to use the card activation system from the current Hearts of Tin with 1 card per General + 1 card per 3 units + 1 joker (chance card). That way the game is interactive but if scattered an army will not be able to activate every unit every turn and the general will have to choose.

I also couldn't help but think while the grid was convenient, a non-gridded game would make it easier to adjust the strength of Brigades.

But I'm done for tonight. I'll decide tomorrow whether to finish the PIP game or reset a 3rd time and try the cards.  At least I'm happy with the combat system now.
Posted by Ross Mac rmacfa@gmail.com