Return to Crysler's Farm : The Game

The troops were deployed in roughly their historical positions, everything was set, the starter's gun went off and the first card flipped. The game was on! 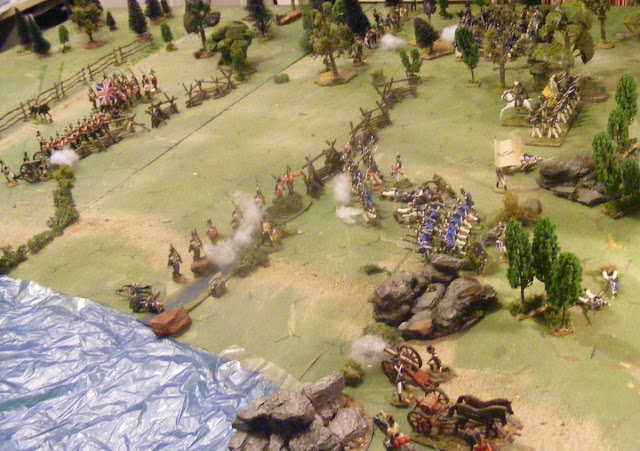 As the American columns struggled through the woods, I suddenly remembered that a while back I had reinstated the  ability of a Brigadier to join a unit and add a d6 of movement to his troops. That helped! At least it did until Brigadier Covington led a column out of the woods and into a hail of fire from the gunboats.
(That's him in the middle, on the horse, lying down amidst a pile of bodies)

In the woods, the American columns pushed the skirmishers back relentlessly, but slowly. The problem is that the Canadians and Indians kept ambushing the American columns, trading shots then fading back into the woods. Since a unit has to be able to see the enemy before charging, the Americans were forced to repeat the process, turn after turn, slowly wearing their enemy down and slowly but relentlessly pressing them back while looking for a mistake or a bit of luck to give them an opportunity to get to grips. Eventually it came and they activated while the lights were in view, a crashing volley followed by a charge drove the light troops back shaken. The right hand regiment pressed on to make sure the enemy didn't come back while the left hand regiment wheeled towards the open British flank. 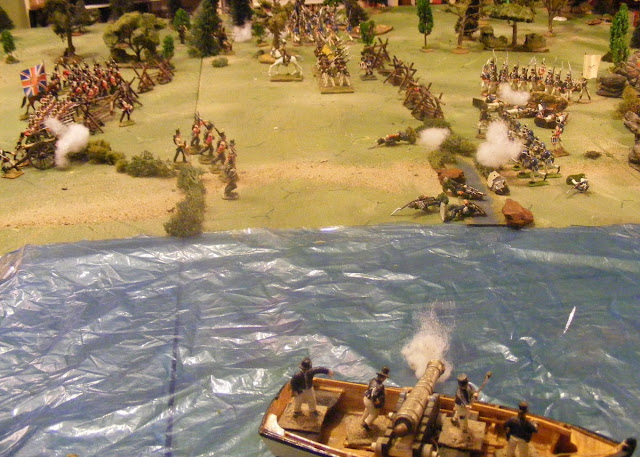 Despite having penalties, the flanking fire from the gunboats was a serious thorn in the side of the American advance. Numbers told however and before long the British detachments on their right were forced to fall back in a hurry to avoid destruction. Morrison himself galloped over to rally them. Alas he stayed a little too long and eventually a long range shot from the US field gun laid  him low. 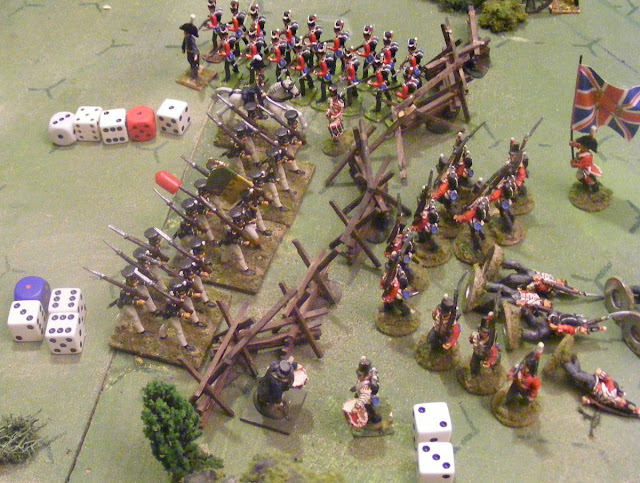 In the absence of Morrison, the acting commander of the British infantry (I'm not using his name, I'm too embarrassed, didn't even use a die to choose an action and shift the blame) made several bad decisions. The first, no doubt  a reaction to the firing in the woods which was level with the flank of the British line, was to wheel back 1/2 the 49th Foot to face the woods just as was done in the historical action. So far so good but the Americans in the woods were at least 2 turns away, the Americans advancing across the field were only the next card away. Oops! No problem, I still had a couple of dice of reaction fire, no hits. OK well the 89th can fire at long range, 1 hit, ok, brace your self, ouch! 3 hits!  Oh look, the American flank is open, what were they thinking?  I'll just wheel the 89th forward and Damn! they wasted their fire at long range. Oh well, maybe they'll get first fire next turn? Not a chance. Black card, the Lafayette Volunteers unleash a volley into the 49th and then start wheeling their flank back. 4 dice, 4 hits!OUCH! The British unleash their fire, 7 dice, 1 hit? Eh? The powder must have gotten wet! Oh well, wet bayonets still work, I sent the 89th forward and they chased the Americans off with cold steel. All's well again, sort of.

Even better,  a chance card  brings an unexpected unit of Canadian local defence militia onto the field! 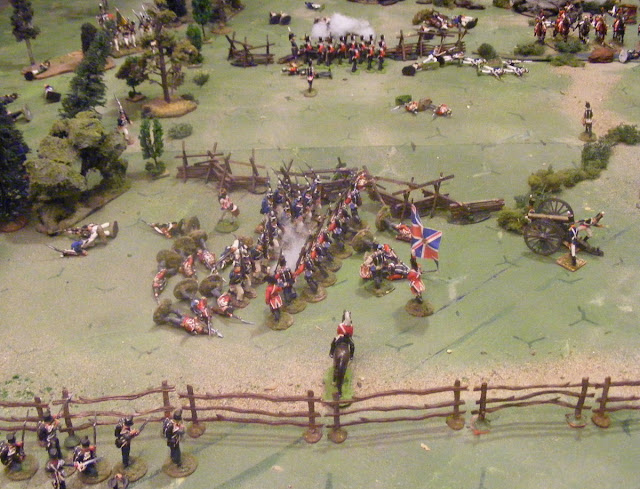 Left on their own, the 49th fall back to rally but resolutely refused to recover any hits. No shirkers here, the hits must be all dead and wounded! Behind them, the artillery commander is wondering why the 49th didn't fall back far enough and a bit to the side so as to clear the line of fire of his gun? Sighhh. Luckily the light troops have rallied and are doubling over to support the 49th.

Out of the woods comes the next regiment of US Regulars and the British powder is still wet.  The Americans fire and then on the next turn lower bayonets and charge. If the British lose they will be broken. Incredibly, neither side scores any hits and the Americans fall back an inch and resume the firefight. 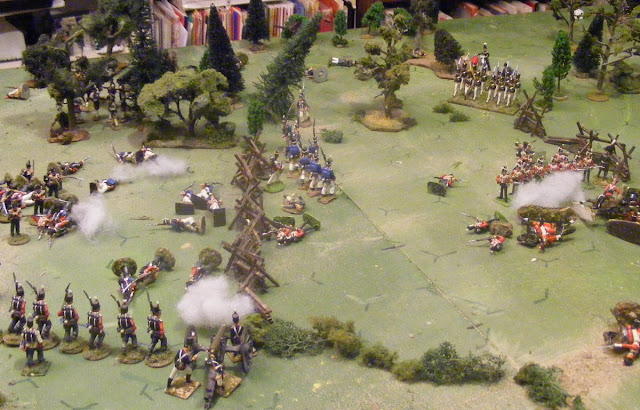 Its down to the wire. Several American units are shaken and one of the guns has been destroyed by the gunboats but the British have suffered heavy casualties as well. There is only 1 red card left in the deck for this turn, I decide to use it to order the newly arrived militia to support the 49th but oh damn! a joker,  a chance card its. ... A Blunder! The ordered unit does something other than what was ordered. Ok 5,6 they storm down the road toward the American Dragoons, 3,4 stand still, 1,2 back the way they came. Not surprisingly, up came a 1 and off they go. Thanks for showing up lads, however briefly, no wonder  there is only passing mention of the militia in the history books.

Next card, a volley sends the 49th Foot reeling back shaken but the gunners have been waiting for this and release a boxcar full of grape on the Americans. The light infantry close in on the flank, fire and the Bluecoats are running.  The Layfette lads are rallying deep in the woods, and the last almost fresh regiment is floundering through the woods farther ahead, looking for the way out. Like so often, including the historical action, there is only one unit left to stop the  advance of the 89th. The Dragoons. They have crossed the gully and wheeled. With rallying enemies to one side and the cavalry to the other, the 89th wheels back as they did on the day and wait. The trumpet blows, the Dragoons ride forward, the muskets crash and 1 sole Dragoons flees across the field. The battle is over.

I really need to dragoon a live opponent into playing this battle with me again. This makes at least 6 times I've played this battle over the last 8 years, once with MacDuff, 5 times with HofT/Morschauser Meets MacDuff, once with Portable Wargame. Five times solo. Every one a squeaker but every one a British victory. Maybe I need someone else to take the British?

Anyway, the limited number of cards didn't have a huge impact on the game but I liked it. A chance card was pulled every turn but one, but because of the dummies only 3 or maybe 4 actual events happened. None of the events had a crucial impact but the arrival and subsequent departure of the militia was cruel in a fun sort of way.  Technically there was no connection between the 2 events but one can't help but picture the fates chortling in a  corner. The British were just glad that they pulled the card. The arrival of a regiment of US regulars representing the boat guard arriving slightly earlier than their historical counterparts might have tipped the balance.

I'm going to carry on editing over the next few weeks,  looking for poor language, mistakes, typos, missed edits and especially, areas where the rules don't accurately reflect actual practice. (yes I catch myself now and then doing things "wrong" and then have to decide whether the rules are right or I am. Usually its me. :)  I am also starting to think about the design notes and trying to think which aspects of the rules haven't been properly tested. I think it may be time to plan that house to house city fight that Jeff asked about.