Atlantican Warriors and The Nine Lives of Colonel MacDuff 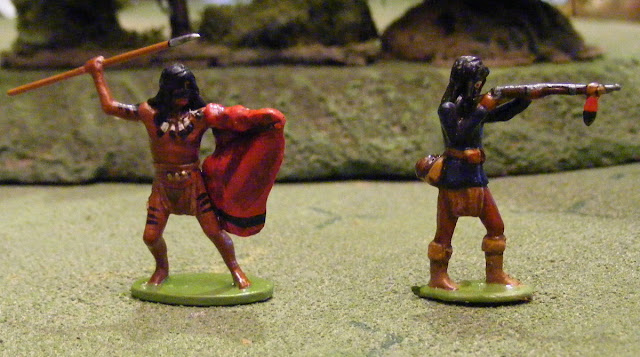 To get my mind of ACW battles, I decided to paint up some more Atlantican warriors so that I can get on with some Toy Soldier games. A quick search revealed a need to do some casting but I did find two suitable bodies, 1 Prince August Skraeling, 1 Zinnbrigade 1900 Prussian. (who knew?). The first of these became one of the wild tribesmen from the interior. He has a trade blanket wrapped around one arm as a make  shift shield for close combat or to confuse enemy marksmen when darting from cover to cover, but has not yet acquired a musket. The other is a richer warrior from nearer the settlements who has a shirt as well as a musket. Both wear simple warpaint, mostly charcoal and grease.(and yes the Zinnbrigade Prussian pants are that tight.)

Looking at these lads and pondering game options for when I get a score or more done, I found myself wondering how well HofT will handle little groups of  5 or 6 which seems the natural way for these warriors to work, especially when raiding and ambushing. Will the 4 man fire groups be an issue? It also got me wondering how much I'll miss figure to figure melee for small actions and whether or not I could slot it in as an optional rule?  That's something that won't be answered until I try a game but I also found myself thinking how simple the ACW rules were that I had just used and how well they had worked; a lot like the early versions of HofT actually. Not that HofT is a complex set of rules but they try to cover so much now that I have trouble keeping them in mind (time for a Quick Reference Sheet) and during a game I am faced with minor unit tactical decisions as well as over all battle ones.  The two thoughts ran together and started me thinking about a simple set of skirmish rules or semi-skirmish rules for single figures which led me back to Macduff.  Since I had already done all the leg work for both approaches over the last 5 years, it only took a moment to jot down a one page version of a revised, simplified MacDuff.

The irony was immediately clear. I had started with an all purpose single figure game (MacDuff), then I had added a very simple element based game for battles (Morschuaser Meets MacDuff) while trying to simplify the main game. Then I transformed the simple battle set into a replacement all purpose game capable of being used with either single figures or stands (HofT), leading me to start work on a new simple element based game for battles to supplement the all purpose rules and to start thinking about a simple skirmish game.

So, the real question then is, am I really not able to make one set that works for all my horse & musket games? If that is the case, how many sets do I need, two or three? If one game isn't enough straight up, can I have a basic game with two variants that change the scale and shift the focus while keeping core mechanisms the same to make it easier to switch back and forth or should they be as different as possible? Oh my! Enough!

The plan before I took that ACW battle detour was to try as big a CM scale battle as I can manage and also to play a small skirmish game. Before I forget how much I enjoyed the last 2 HofT games and waste more painting & casting time on fiddling with rules, I'd best get back on track and play those trial Hoft games. If they don't work, then it will be time to rethink the master plan.
Posted by Ross Mac rmacfa@gmail.com