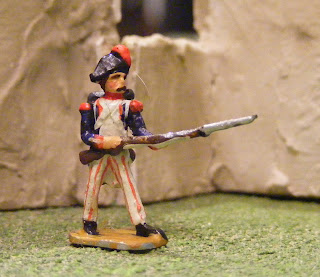 Even though not being serious about it, I still feel somewhat pretentious as well as definitely silly, numbering my remaining years from July 4th 2010, the date of my heart attack. (I almost said first but no need to be suggestive), but there we are. To be honest, it's only recently that I've come to realize that my "little incident"  had deeper and more lasting physical and psychological effects than I originally thought.

I'm not going to bother redoing months and days but this seemed like a suitable time to  paint up the sample Scruby Revolutionary French Grenadier that I got last year. I rather like him but he is old Warrior/Rose etc sized "25mm" and not a good match for my home-made Turks. For now at least he will remain an orphan while I ponder.

It may be obvious by now that I didn't really have anything to post about but its been a week which is a long time between posts for me. Having arrived home last night from my internet free trip, I find myself somewhat dismayed that I felt no burning desire to jump into anything hobby-wise. Maybe its the usual summer heat and humidity plus being a bit tired? However, vague plans are under way to get painting again, to play some historically based scenarios to give Hoft a bit of a work out, and for a new mini-campaign. Last but not least,  I have started planning a long over due Prince Michael game using my Elastolin Prince Valiant figures. It was also July of 2010 when they were last on the table!
Posted by Ross Mac rmacfa@gmail.com