Another week, another CS Grant scenario played with Memoir 44. 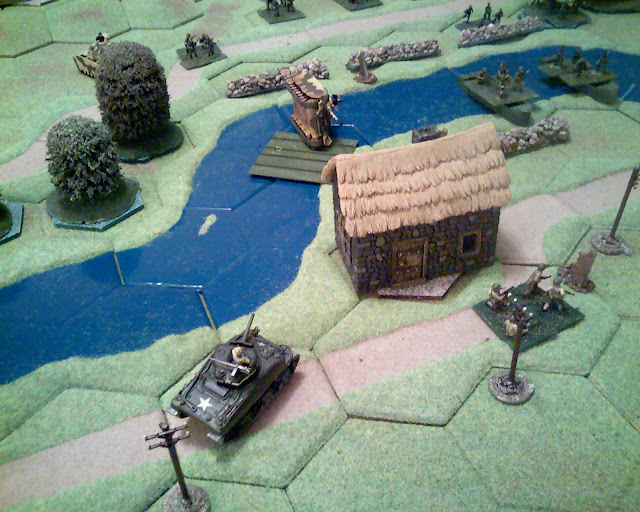 No fancy effects so please imagine the Pzr IV sinking below the water while the crew of the Sherman cheers wildly about their first shot of the game (and last but who's counting?).

This scenario gave us a couple of bumps to work out. Once again it calls for dicing for turn arrival which doesn't seem to fit. I suggested that, given the difficulty of moving multiple units, we ignore the dice and allow units to be brought on at the player's choice of turn, BUT no off table units may be "ordered" only the new "On the Move" option which appears on some cards may be used. They reinforcements may have arrived slightly earlier than in the original but the last unit on didn't have time to move to the front and the game was verrry close so that option seems to move.

The next issue was the boats. Grant lays out fairly specific rules for the boats but how to translate them across systems. There were no reusuable boat rules in Memoir but they did have some river crossing and amphibious landing rules so we studied these and came up with having units stop when they boarded a boat, take 1 turn to cross and then are free to move and fight as normal on the 3rd turn. No fighting while embarked. We started off trying to track the empty boats and current but decided not to bother next time, just limit the number of units that can be on the river on any one turn.

We've also not been happy with either Tiger rule option so after some discussion we put together 3 rules to make one that worked better for us anyway. The Tigers were classed as Elite which allows them to take 4 hits instead of 3 (meaning even  a lucky shot with 3 hits like my Sherman got vs the Pzr IV wont kill a Tiger) and we gave it the longer range and anti-tank punch of the Tank Destroyer or Heavy Anti-tank gun units  but to level the playing field a bit, restricted it to a 2  hex move instead of 3.  it worked really well with the Tigers able to rely on their long range, punch and ability to take damage while the Shermans made use of their speed and combined arms.

Lastly, we again discussed unit translations. We had been going with 2 Memoir units per Grant unit and that looked good but it either made for a much longer game if we raised the Victory levels or else 1/2 the units never got to do anything before the game ended. We didn't have all  day for this game so we cut it back to 1 unit = 1 unit which produced a fast paced 2+ hour game.  The table isn't big enough for the full Overlord rules but we may check out the possibility of adapting some of the rules to a facilitate a larger all day affair.

The scenario calls for the attacker to establish a bridgehead large enough to stop small arms fire against the boats. Ron was allowed to nominate the LZ after the game began and the area was marked out as a majority held victory point for him only. Meaning if he had the majority of troops within the zone, he got an extra VP. 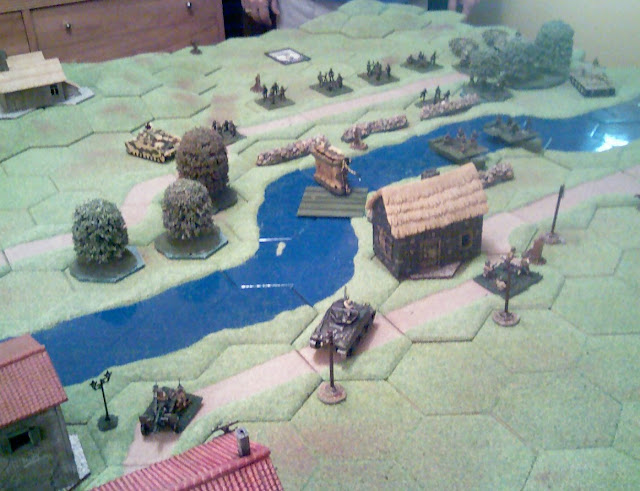 Once again the game was too faced paced and exciting to remember cameras  so these 2 views of my early lucky shot (1/3 chance of a hit on each of 3 dice = 3 hits) are all I have.

Ron gave himself a major headache by choosing a landing spot on his left flank and cramming the vast majority of troops into that sector. Unfortunately, I drew most of the left sector cards and held them because I had almost no units on my left except a dribble of reinforcements. After the fact it was clear that deploying artillery and mobile troops in the center would have seriously enhanced his ability to support the river crossings.

As it was, the first wave stormed across into the center of the hole in my line. I rushed defenders from my main position (deployment as per scenario) to block them and got lucky on cards and combat dice, destroying or forcing back the first wave.

It was the first time we had used our improved Tiger rule and it was about 1/2 way through the game when we realized that they had the range to direct fire across the river with effect. So did the mortars if they were moved up and the artillery. Eventually Ron developed a fire base and drove back my units.


Having few units I did my best to retreat damaged ones to avoid losing victory points, using reinforcements to plug the gaps. This tactic eventually allowed Ron space to cross over with Tigers and infantry but it kept his VP count down while I picked at him. Ron's troops of course, tended to end up with their backs to an unfordable river.......As before, I relied heavily on my American artillery but it was definitely an all arms affair and a squeaker of a game.  Final count,  1 Tiger, 1 Pzr IV and 4 infantry destroyed vs 1 Sherman, 1 Tank Destroyer and 1 infantry. Ron's 2nd Tiger was 1 hit away from destruction and my remaining Sherman and 4 of my infantry were all down to 1 hit remaining, even after a successful Medic card. that briugh 2 back from the brink. Phew!