This morning I decided to finish out the game I had started without rewriting the rules to be more like HofT. In part this is because a question from Bluebear Jeff as to whether the game had been as much fun as a game of HofT  reminded me that the initial idea had been to play a CM Scale HofT ACW game, not to develop another set of rules (not that that wasn't a good idea.)

Standard HofT games are aimed at Table Top Teaser type games, usually small ones. The idea here was to be able to fit most major ACW battles on to my table top and fight them out in several hours. The scale is such that I can fit, for example,  all of Gettysburg on the table (at least for either the 1st or the 2nd & 3rd days). The rules still need to be simple because the major battles will call for two to three times as many units as fielded for Bull Run and I suspect that it would take a fair amount of physical and mental energy to manage the planning and execution with that many entities.  But that's the point. Over the last two years I've been so busy resting and recuperating that I fear I'll lose the ability to do anything else so I think it is in my interest to occasionally trot out something requiring a bit more effort. (Only occasionally though not as my main thing!) That said, by the end of this game, it was starting to flow well so a larger game feels very possible.  Hmmm, I think when I rearranged  things to 1 stand per hex, the number of brigades ended up right but I may have short changed myself by a couple stands on each side. Oh well. 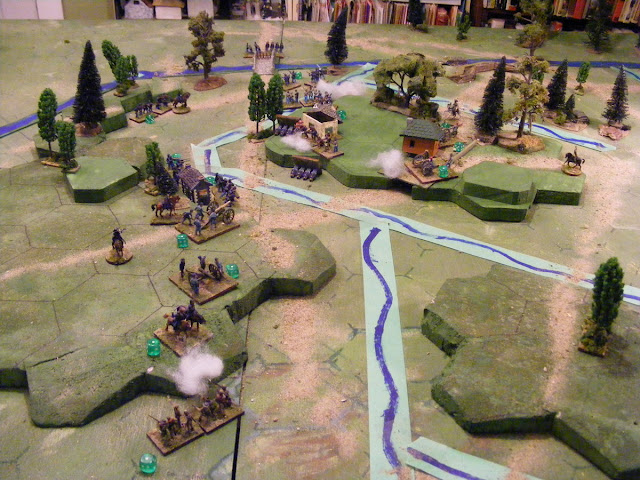 In brief, this game developed along much the same lines as the original battle, partially due to the starting first couple of moves and there being no decision to force the game to diverge, but also to the effect of the terrain and the rules that made co-ordinated moves very different given the organization, terrain, situation and the rules. The Confederates held their initial positions against the initial attacks by the Union 2nd Division. Given this success I brought Bee and Bartow across to support Evans as was done historically. For a short time I thought they might win the battle all by themselves but eventually numbers and persistence told and they were forced out of position and fell back to Henry Hill though in somewhat better shape than on the day.


By then the 1st Division had forded Bull Run and the 3rd was mostly on line. After a short but damaging bombardment and several failed piecemeal attacks, a co-ordinated attack went in and seized the front half of Henry Hill. At just the wrong time (from their perspective) a series of low Orders dice made it hard for the Rebs to rally troops, bring up reserves and form a line. However, by the time the dice turned around they were in position to take advantage and launched a series of counter attacks. Casualties were heavy and I  thought they might break themselves against the Union line but they were fresh and  many Union units had suffered earlier and suddenly crumbled under the pressure. Over night I had decided to bring in a 50% army morale rule and the Union crossed it just ahead of the Confederates  and gave way; repeating history.


I have re-written the rules (available here as the Hexed General) to reflect what I ended up using and am quite happy with them. However, that CM HofT game still awaits. Techically each of the 4" on the table above is equivalent to 16" in HofT so even 10cm doesn't quite cut it. That leaves me two options, fudge the scale and play as is, or reset the table trimming about a foot off each size and making all the terrain features larger. If I do that, I'll probably get out my new cloth and lay it over the hills to see if I can pretty things up a bit.


Why? Because I'm that anal over the scale issue? No actually, I've just been looking at Simon MacDowell's new terrain layout as seen in a refight of Schellenberg. A far cry from the standard issue ping pong table we used to play on in the basement of our college dorm/barracks. I'm not saying that my hastily painted cloth is going to match this  nicely painted and flocked table but  I may take a few days to make a table slightly less makeshift than the one I played on this weekend. Possibly change the battle while I'm at it. Depending on how things go and considering outside commitments it may be 2 weeks before I get the next game going and I won't promise not to get distracted by something other than 1/72nd ACW but I will get to it eventually.
Posted by Ross Mac rmacfa@gmail.com