I remember now why I do more "inspired by" games than actual historical refights; its a lot of of work!  I've also seen some light as to why I was such a lousy navigator when driving a minesweeper around the Channel Islands on the coast of BC and have increased respect  for cartographers.  However, after nearly 5 hours of mapping, table setting up, delving through Orders of Battle and re-reading parts of accounts of the battle, looking for start times and positions, and sorting troops, the table may look crude and improvised, but its ready! 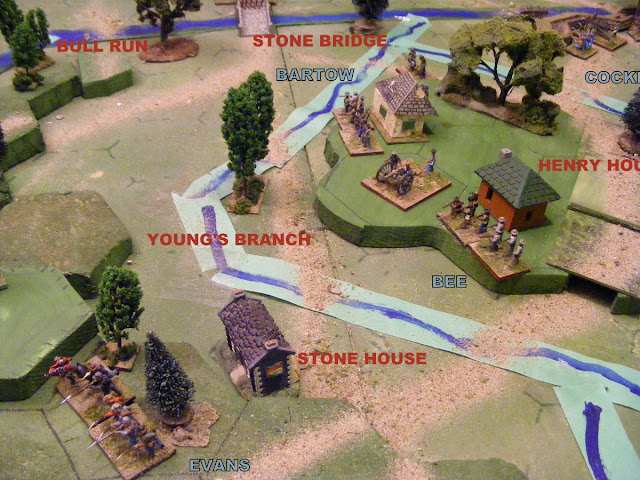 The first picture zooms in on the area where most of the fighting took place. The core of this is the area used for the Battle Cry scenario but set up as of 9 am, just before the first shots were fired by Evans Brigade.


The second picture shows the whole table top. covering an area of roughly 4 miles by 5. There has been SERIOUS fudging of details of winding streams, hills, roads and woods but I think the main details are right enough for my purposes. I am going to have to do some checking out of chalk , poster paints etc as it would have been sooooo much easier to just draw or paint the streams, roads and wooded areas on, especially with squares as a guide though once I had gridded my layout map into 4" squares, using the hexes to fine tune placement worked pretty well. Having a lot of small hill pieces that could be put together would also help. Sounds like work, maybe after I remodel the old pole-barn garage into a  workshop. Only a year over due on that one. 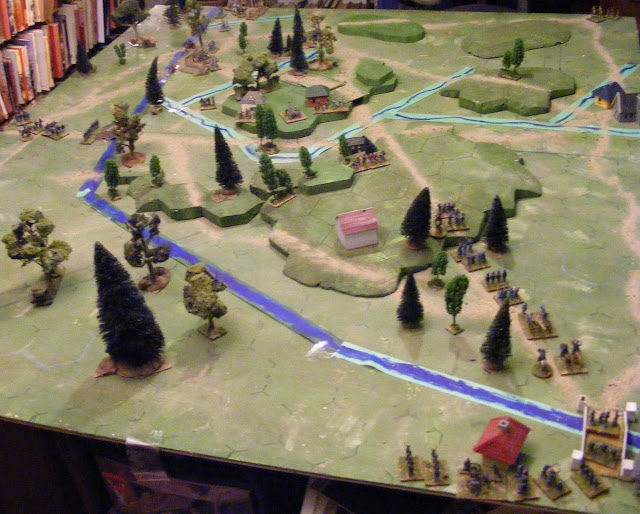 I was going to base the troop dispositions and strengths on the Courier article but it was one that I had clipped out during one of my "gotta make more room on the shelf" phases and the table with arrival times and locations didn't make the cut. The scenario didn't specify which of the two F&F scales it was using either so, since I already had Battles & Leaders out, I stuck my head into it. Then I looked back at the rules, the number of figures/stands I had pulled out and the last minute revised ground scale. I also pondered the lack of Corps and in the Confederate Army, the lack of divisions,  not to mention the post-war memoirs battle between Johnston and Beauregard over who was in command.


Earlier today I had revised a copy of the rules to work without a grid. It didn't take long since it was mostly a matter of multiplying all distances by 4 and referring to inches and zones but I had did have to revise the combat so that units will target a unit rather than a hex. this is something I had been considering anyway after the Ferryman's comments the other day. Once I went back upstairs to clear the first lay out away, I decided to give the hexes a go after all. Since there were less than 10 brigades on each side, I considered going back to my original thought of 2 stands per brigade with only 1 brigade per hex but digging into the OB's got me thinking again about the uneven size of brigades. I also considered Division commanders again. If I made them equivalent to Corps Commanders, each would only have 2 to 4 units, not enough. If I didn't, the Union would have 1 General to command the whole army including some units which would be 5 feet or more away and thus at double points distance. I finally decided to add Division Commanders in for this battle at least, and to field 1 stand per 1,000 men ignoring Brigades.


For the Union this gives me an Army General and 2 subordinate Generals, each with 8 stands on 1 corner of the table and a subordinate with 5 stands on the far side. A little command heavy perhaps but workable at least. For the Rebs I decided that both Confederate Army commanders can use PIPS on any Confederate unit since that's they both seemed to have given orders to each other's brigades on the day. That gives me 2 Generals, one with 11 stands and one with 10, all intermixed  and scattered across the table but all able to be ordered by either General.


The change to the combat will be that each unit (stand) will target 1 enemy unit (stand). The die modifier for cover will apply to each firing unit. (thanks John). All firing will be done before the effect is determined.


To see if the rules have any validity, it would be best to attempt to follow the original battle moves   to see if they are even possible but that would require more studying, note taking and cross referencing to build a script to follow and a timeline and list of benchmarks to check against. Instead I will test the rules to see if they are any fun regardless of validity. So, no script! Once the first shot is fired, both armies are free to do as they see fit. (I suspect I may follow the early moves anyway and Jackson at least head for Henry Hill,  hoping for a chance to stand like a Stonewall and earn his nickname. Sure hope he doesn't end up Jelly-legs Jackson!)


It took a turn and 1/2 to realize I didn't like the flow of the game. I was about to throw the whole thing out when I realized that the major issues were all around  the 2 units per hex. So I made all brigades 2 stands and reset the game. I also decided that the revised combat would allow me to do reduce the penalty for activating in the enemy fire zone and instead let infantry fire 1 die at 2 hexes if they don't move, uppig artillery to 2 dice. I've also added a "take the ground" rule for assaults.  I'm now abut 5 turns into the game and its flowing well. Report tomorrow.
Posted by Ross Mac rmacfa@gmail.com