Another 32 degree day in the shade. Too hot to work, too hot to finish painting the last of 3 Elastolin conversions  (sweat dropping off the brow and all) but a dedicated fellow like me can still play a game or two.  The initial goal  was a 3 game mini-campaign. 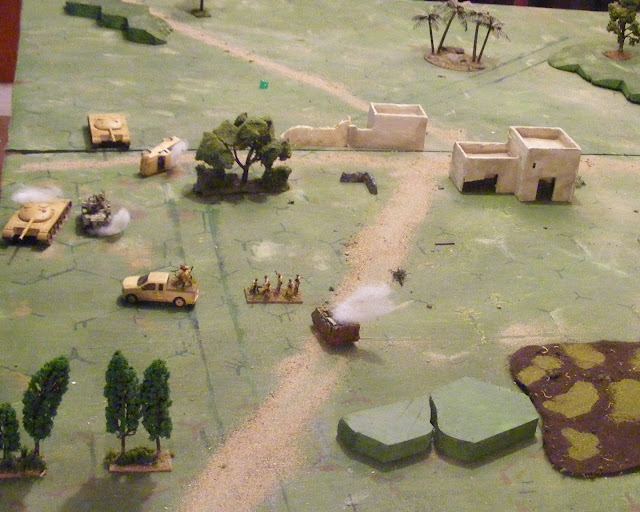 The first game saw Naryatria and Roscia clash over an obscure crossroad as per Reconnaisance in Force, the Grant TT from Battlegames Issue #14. Only 6 units aside, the rules were Memoir 44.  Yeah I know, that's WWII and this is Nineteen Sixty-Something but I figured that these armies were first raised for AK47 where a Tank is a Tank so the same should hold true.  I played the hand of cards normally for Roscia while throwing several cards away each turn for Naryatria. In both cases I didn't draw the replacement card until the next turn so as to keep it a secret. It all worked well with 2 exceptions.

The 1st was that while the cards worked ok, without the hidden factor, holding a hand of cards seemed like more work than it was worth since my memory, poor as it is, wasn't bad enough to forget what the other side had. I did my best to play as if I didn't know, but it became more work than fun. Next time, I might just draw 2 or 3 cards each turn, play 1 and discard the rest for both sides.

The 2nd thing  is that "MY" guys lost!   The Naryatrians lost a tank, a Mechanical (Patrol Car) and 1 stand of Elite Lion's Brigade infantry but they took the Crossroads and knocked out a Saladin, 2 stands of Commandos and an M113 mortar carrier. 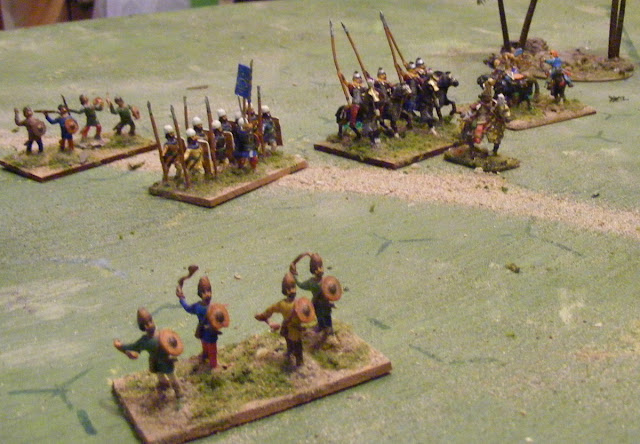 The not-quite-modern-anymore game went so well, and resetting the table felt so much like work, that I decided to break out my ancients. (See Gathering of Hosts for a post game discussion) .  In short, the Memoir game had worked so well, I went back and re-tweaked my ancient rules to fit hexes again and really liked the feel of the game.  It is just sooooo much easier to write simple rules when a stand = a unit, and you can specify easily defined zones. Its also easier when you become accustomed to a wargame as a "game". Oh, and and my side won to boot!

Lots of good news but you can see the troubled waters ahead right? Don't worry, we'll make it. 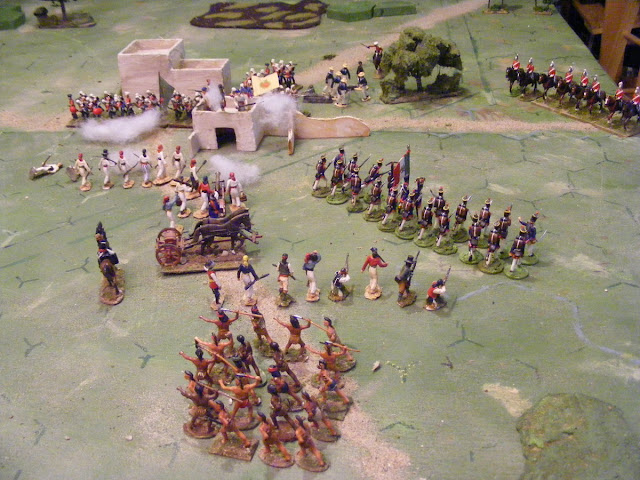 The question that arose was of course, "If this works so well, why not convert all of your games to hex based, a unit is a unit, games?"  Why not indeed? What was I looking for? There seemed no option but to break out some 40mm troops and play for an answer. I've been wanting  to get into some more Colonial, asymmetrical games,  but until I figure out what feel I want, and how I want to organize my armies, I can't get seem to get at painting figures. This was a small game, only 6 units a side and San Carlos already has a history of working with the Bretheren, so I figured that I had enough. The native Atlantican spearmen are a mixed bag of 3 tribes but its a start. The temptation to improvise hex sized units and some rules was strong but a game of the long planned sort made more sense.

The game was .....OK. Great would have been better, but OK isn't all that bad really.   I thought maybe there were some broken rules but it turned out to be something else. I had consciously built the rules so that a line infantry unit was balanced against a light infantry or cavalry unit half their size as suggested in Scenarios for Wargames. Due to my confusion and hesitation to decide on unit sizes over the last 3 years, I ended up fielding 24 man line infantry and but just 8 man strong light infantry and cavalry units. Some quick post game testing showed that 12 or 2 x 6 light infantry and 12 cavalry would have been a decent match as intended.
So that wasn't it, that was just an error in picking forces, I should have made the light infantry sharpshooters or given them rifles, added a 3rd unit or cut the size of the line infantry.

But there was something else missing. MacDuff had been written for small Colonial clashes like this but HofT had theoretically been written for larger battles of the type I rarely if ever play. Since I intended to use them primarily for Teasers with a toy soldier flavour, I had consciously try to modify them that way but it seems that my subconscious had been trying to sabotage that process by concentrating on various Historical battles as sources of testing and example when designing. The result was a game with not quite enough story for a Colonial toy soldier game, not enough meat for a "serious"  tactical or operational WARgame and not enough "game" for just a game. It seems I had violated the "maintain your aim" principle.

I might have missed this if I hadn't been playing Memoir recently and looking at Battlecry. All was not lost because I've been playing with variations on the core for 9 years now and I know its solid. Its all the extra complexities and restrictions that keep sneaking back in that are the problem, as well as the avoidance of things that smacked of "game-iness". (Oddly but predictably, once I'd stripped out some of the extra complications I re-ran one of my tests, Montcalm's attack on the Plains of Abraham and getting the historical result is now easier! )

Luckily, the game had been sufficiently fun to re-remind me of just what it was I was looking for, what it would feel like and basically how to get there. So some of the inevitable tweaking followed to remove restrictions that had crept in, the whole disorder and 25% thing got turfed for the nth time and I reset with the smaller forces and stood back. Something still wasn't right. During the first game one chance card had come up, that was it. More would be better, I decided to go back to card activation but by unit since there were no brigades on the table. I mixed in a couple of jokers and set to.  YUP, this is the rules/game I should have taken to Huzzah! (damn).

Will they still work for my ACW battles? I don't know, I hope so but if not, I'll write a separate set of battle rules. One important thing is that I think, at last, that I could take a non-wargamer and have this make sense to them, one of my secondary goals and thus making them suitable for my War of 1812, set to be my "historical cover story" collection.

So now I have sign off in terms of rules, organization, basing and setting for my Ancients, Dark Age, Medievals, 16thC, 18thC fictional, 1812, Mid 19th C and 1960's collections. It's time to get painting. (Once the weather cools!)

Tomorrow, I'll either look more closely at the 2nd Atlantica battle or maybe I'll let the Newport Noodle report on it.