Playing with Toy Soldiers vs Playing a Game

A few days, or maybe a week or so, someone, somewhere, in a comment on another blog possibly, made a comment about wanting to be able to "win" solo games. My mind went "huh?" and moved on.

Around the same time, my friend Ron, in preparation for a summer vacation at the family cottage back in Quebec, started putting a lick of paint onto some Memoir 44  figures since he was just going to pack the games, not all his Hexon terrain and 1/72nd figures. Nothing too fancy, just flesh,  weapons etc, like an old Crescent or Lone Star figure. I couldn't resist and volunteered to do the Japanese in the same style. Something I got to yesterday. (Bear with me) 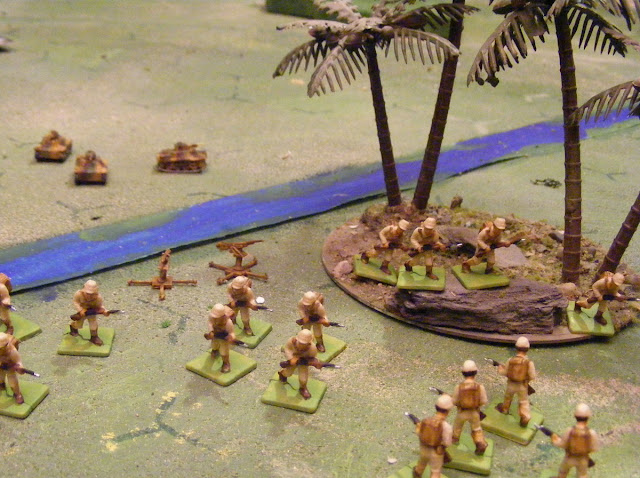 Memoir 44 Pacific game pieces.
Now, the mechanisms and the whole "game" aspect of Memoir/Battlecry etc have been on my mind recently so it wasn't surprising that they should float through my mind while painting these figures.

This is even more the case because the old question about having both 1812 & 1840's armies of the same size, shape and style have been weighing heavily on me as well as the question of historical vs fictional games. As part of this, I had started to again ponder the possibility of a series of small historical hex based, 1 stand = 1 unit games based on various War of 1812 battles.  Essentially the Battlecry model which meant I had been pondering about stealing mechanisms and playing the system solo. (Aha we're getting closer.)

It was the ambush card which did it. Normally one holds this in one's hand and then at an opportune moment uses it to surprise an enemy who close assaults one of your units. I normally play solo games by alternately placing myself in command of each army and doing my best with it. I use markers and dummy markers (blinds in new speak) for hidden troops, where appropriate, with neither side knowing which are which for sure until they are revealed. For the Battlecry system I was contemplating playing 1 hand  while drawing all or most of the "other side's" hand anew each turn to maintain an element of surprise while still keeping some aspect of hand building. But what to do with an ambush card? Could I trust an impartial mind to pretend not to know that the enemy is going to swat the next unit that makes an assault? Not easily, not with fun, it would become an academic exercise. The joy of surprising and trouncing the foe would be lost. AHA!

Why isn't this an issue  with my normal solo games? Why do I not normally consider winning and losing as an element of my solo games? I do when I play an opposed wargame. When I play Spider solitaire on my computer I want to win, why not when I play a solo wargame? I can't completely answer the question, but it seems to me now that when I play solo games, I have been playing to imagine and observe, to build a story, rather than to "play a game". "Winning" means getting a good story with some drama, some twists and an outcome.  Nothing wrong with that but I can see now that at times I might like to have a choice of approaching it either way.

Something to think about and work on this fall and winter I think.
Posted by Ross Mac rmacfa@gmail.com