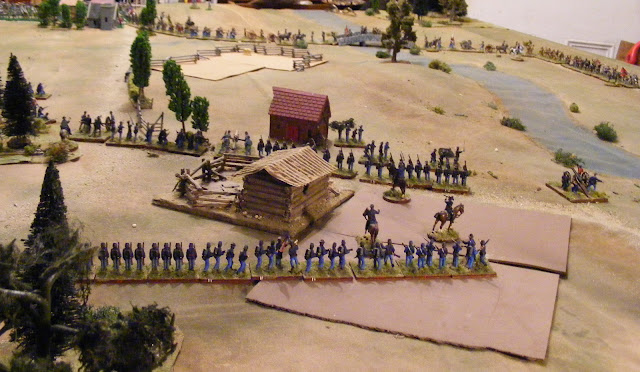 The morning mist rises and consternation reigns in the Union camp as the long roll sounds: "Fall In!".

Its been a while since I played a full wargame and the arrival of ACW reinforcements coupled with the rainy, windy weather brought to us by the edges of the  ex-tropical storm formerly known as  Hurricane Sandy seemed like an opportune time to remedy that. There are some of Grant's scenarios that scale up fairly well with Brigades as units but none of them seemed quite what I was looking for. Then I remembered that I had some scenarios from old Couriers.  These were written by Paul Koch for On To Richmond (OTR) but were about the right level for what I wanted. One in particular came to mind though it may well be in excess of 20 years since I last played it and at that it might have been played with 15mm Napoleonics.

I hope Dick will bless or at least forgive this breach of copyright but I thought there might be others who would enjoy basing a game on this. 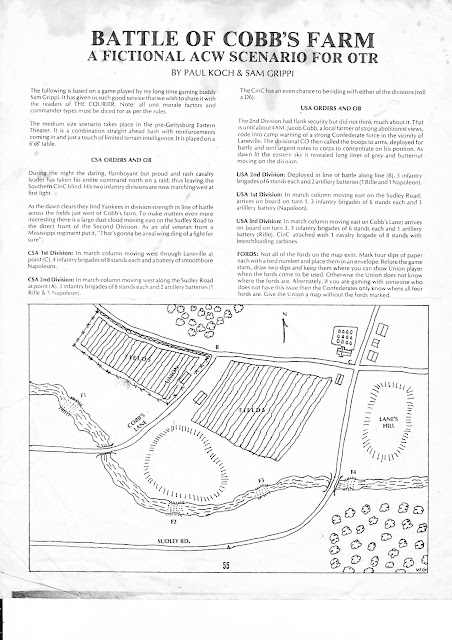 Extract from the Courier Magazine. Issue unknown,
(you will have probably have to right click on the image and open it in a separate tab in order to make it big enough to read.)

The map is based on a 6' x 8' table. I have a temporary, unpainted extension making mine 5'x7'. Since the original map was roughly 5" x 7", I just took as it was. Since my extension is unpainted I more or less had to use one of my cloths so I went for the fall/winter one with a river painted on. Its not quite right but close enough to get the gist. I thought about bare trees with a touch of autumn foliage but ended up just sticking the usual on. Its plain that my 2 feet of new fencing is lost on the table. 6 feet was way too little as a target. I'll need double that but can find some variety by using post and rail which appears to have been more common out west as well as some snake fences with the big X  supports like Jeff had on his blog a couple of years ago.  I also need to figure out what to do about buildings. Only a few civil war field battles involved street fighting but many saw fighting around farms and other isolated buildings. At the ground scale of HofT such a farm including house, barn and outbuildings should occupy an area of no more than around 2 square inches. Even a small HO farmhouse will usually occupy at least twice this if not four times it and to treat the whole as equivalent to a European town would be to exaggerate its importance while to use houses that under scale would look odd. I am considering two options; place houses that look good and treat them as visual only or make houses that have a slightly too big footprint and exaggerated height and ignore the distortion. If I enjoyed making scenery there would be no hesitation. For now I'll use what I have and allow a garrison of 1 stand.

The scenario calls for brigades of 6 Federal or 8 Confederate stands. I was fortunate enough to be sent a copy of OTR last year and stupid enough to lose it somewhere on my computer. A complete mystery though there is a slight fear that I only viewed it as an attachment and forgot to save it in which case Google/Gmail would have archived it in file 13 along with the email. Or it is filed on my hard drive like I thought and its a search criteria and misfiling issue.  Sighhh. (** update I found my copy from Ed and have received a replacement from a reader.) Anyway, to convert to HofT I decide to double the number of stands and divide into standard regiments. So seven Reb brigades became 28 regiments or 112 stands of infantry. Guess what, there were actually enough troops when the recent reinforcements were counted, if I fixed all the bases that had shed units and reorganized them, but they wouldn't fit. The 1st Division stretched out along the road reached all the way to the board edge leaving the 2nd Division in limbo and the 1st Union Division line of battle stretched from road to river with a reserve. Hmm

As I stared at the masses, I started wondering how  I was going to track hits and morale on 27 infantry and 8 artillery units not to mention tracking 10 commanders. Hmm

There was a temptation to back out and go with brigades as units but my intention was that HofT could handle a Corps sized battle as a full 5-6 hour game and it didn't seem right to give up without trying and one of my goals was to play a full size solo game this year. As a compromise I reduced the multiplier to 1.5 giving me 12 stand Reb and 9 stand Union brigades. This turned into 3x3 Yankee regiments and 3x4 Reb. I could as easily gone with 4x3 Reb regiments but my own were organized as 4's, that was all the flags I had and anyway I wanted to see the difference in action between fewer large units and a larger number of small ones.  I'll probably leave the game up and delay playing until Friday or maybe Saturday and see if I can't work a bit on flags, command stands, terrain and admin aids like order markers. 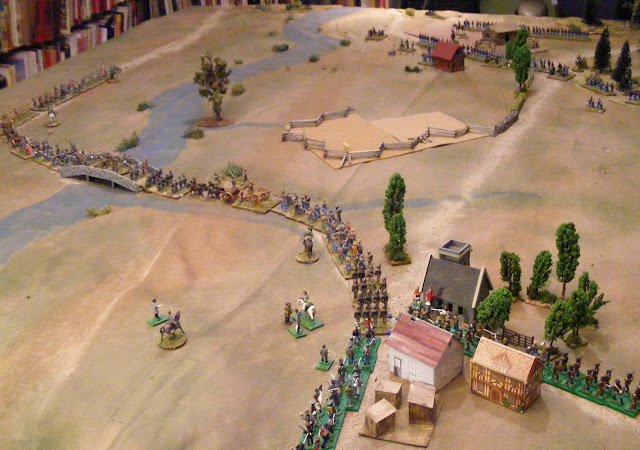 Looking West along the Sudley Road.


This does raise an interesting quandry though. I'm not finished painting but I now have more troops than will fit on my table and I can't expand the table by much. Originally I planned to put 6 figures in 2 ranks on  40mm x 40mm bases but decided that the thinner lines resulting from 4x1figures on 40mm x 30mm bases looked more civil war-ish. Then I promised Jerry that the decision was final. Well, if I did squeeze 6 or 8 figures onto each base and used 3 bases which is about right for 450 men, then I could use every one, paint more and still fit them on a table. Oh, errr, Jerry, did I say?.....  Well after all, a base is a base right?

Ok so I did manage to reduce this game to about 800 figures instead of a 1,000 figures, did I mention that this was originally supposed to be a minor side project?