My new Union flags? Didn't take long to figure out I wasn't up to hand painting a few dozen US flags so off I went to Warflags, downloaded some textured flags and made a donation to help maintain this valuable site. It took me a few tries to get them re-sized to what felt right but once done they look like they'll serve well. Since time was limited and a re-org contemplated, I just chose 6 flagless regiments and propped the flags up for the game.

I also decided to shift the table a bit to match the map a little better and for looks. 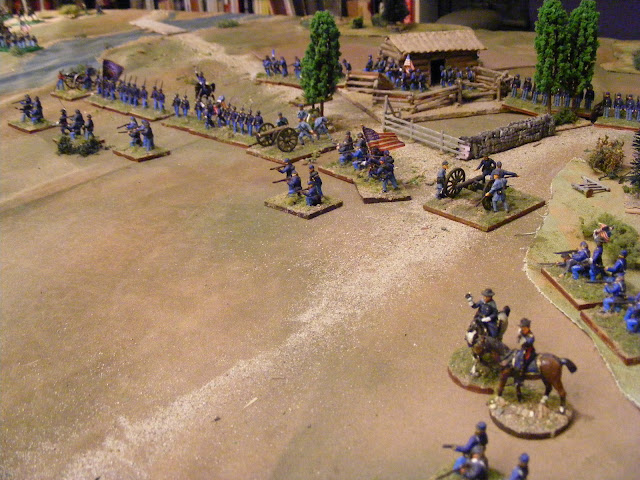 After looking at my little green dice and my bingo markers, I decided to go with the latter for casualties since none of the units would need to track more than 2 hits and even I have never been absent minded enough to pick up a red disc to roll during combat. I have the same issue with using dice to track how many order Pips I have to work with which is why I wanted some order markers.  Ideally I would like mounted couriers but wanting to avoid last minute painting, I just sifted through the new volunteers that had come adrift from their bases and chose buglers, sergeants and officers which I mounted on little copper discs.  WhenI roll for a general I place 1 for each order available. As he issues orders the marker is placed next to the Brigadier or unit that is being ordered then removed when the movement is carried out.I did 12 Reb and 9 Yanks to start and borrowed when I needed more. 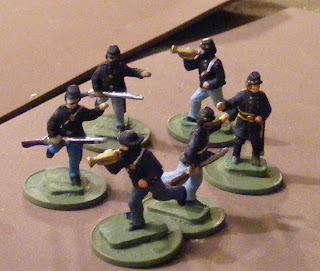 Lack of mounted officers was a bit of an issue but I begged, borrowed and stole enough to mount all of the Division Generals and most of the Brigadiers. Something else to work on.

Last but not least, I decided to go with 4 x 3 stand Reb regiments per brigade rather than  3 x 4. Amongst all the theoretical points, a 3 stand unit with flag in the middle just works nicely especially if I put 6 figures per base in stead of 4 giving me 18 man units as originally planned. 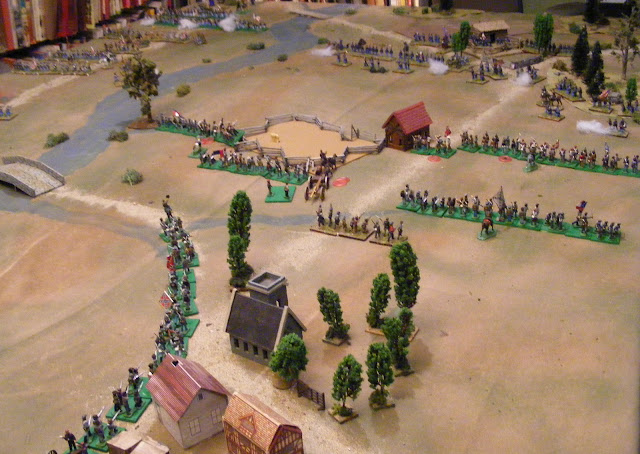 At last the game got under way. In the picture, the 1st (old) Confederate Division has crossed the bridge, deployed and is attacking the Federal 2nd Division which arrived just ahead of them. The 2nd (new) Confederate division has started a hesitant attack once 3 Brigades were  deployed. The last Brigade is just arriving. It took the corps about 5 turns to deploy or about 1 1/2 hours. At this point the Yanks are outnumbered nearly 2:1 but the Rebs are having a hard time capitalizing on their  numbers because of the constricted terrain and some low Order rolls just as they started the attack. These followed some very high rolls while deploying (parade ground soldiers?). I had been worried that the allotment of order points was too high but on the whole it worked well especially since Division Generals couldn't share so 1 commander not trying to do much might have leftovers while another in the midst of an attack is screaming for more.. .