My ACW - Adding the Who to the What (Updated)

OK, now that the essential, practical details are settled, like rules, size of stand, numbers of figures per stand, number of stands per regiment, number of regiments per brigade and how the units will relate to scenario units on both an interim and long term basis, I figured it was time to figure out how to figure out which unit is which and who the Generals are.


There are a couple of simple, common ways to do this. 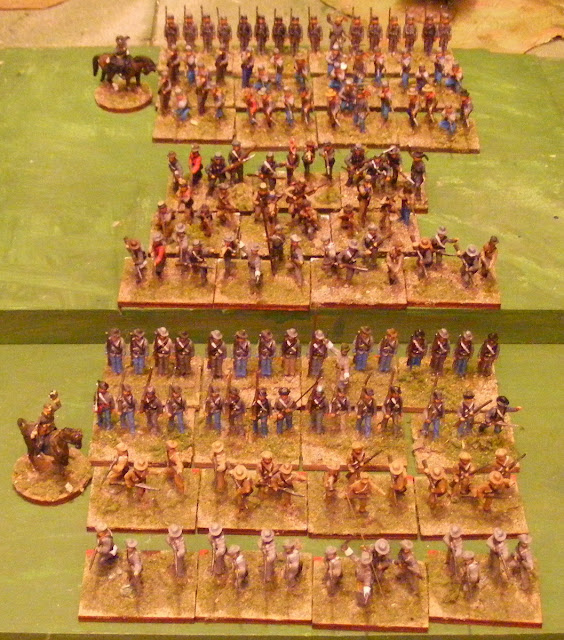 The current infantry of the Confederate Army of Acadia. Three brigades totaling 10 regiments. The new Red dot indicating 1st Regiment of the 1st Brigade can just be seen at the right rear of the leading regiment.


Since I started resurrecting the figures I had painted 30 years ago in order to play a campaign against my friend Jerry for control of the Annapolis Valley, without worrying how or why, it was already decided that this was about playing wargames that evoke the Western campaigns of the American Civil War not about refighting historical battles. I didn't think much more about it until I started thinking about flags.

The kicker is that while the ANV carried the now famous battle flag for almost the whole war, the same was not true out west. There almost early army carried its own design of battle flag and many regiments kept these for some or all of the war, even as they were transferred or armies were amalgamated. So when you see the flag, you know who they are. What's worse is that most of these flags do not evoke the ACW for me. A red flag with a yellow crescent moon or a blue square with a white circle don't say "Johnny Reb" the same way a blue St Andrew's cross with white stars on a red background does. To make matters worse, while some western units served in the ANV and carried their flags, the only, brief appearance of eastern units in the west was for Chickamauga. So, you can find Mississippi regiments in Virginia but not the reverse. So much for randomly picking favorite units.

One other small issue raised it head as I pondered why I even needed to identify units if the uniforms were generic. If I do end up with 32 regiments per side, how am I going  to remember which of the 6 Airfix units is the 76th Mississippi or be able to say who it was made the desperate stand when writing up battles? I decided to reorganize the existing troops into  their 4 stand regiments and start painting extra stands where needed while all this sorted itself out in background mode. Many of the existing stands have discrete regimental and brigade codes in the form of small Roman numerals on the back of the stand; codes so discrete they are nearly impossible to see on the table. Reorganizing meant re-labeling at least some stands so I decided on a new, bolder scheme with a swatch of the brigade colour on the back of the stand reaching over the top so they can be seen from above. The position would indicate seniority. It was while doing this that it all came together.

So, the decision is made. For ease of memory, all of my brigades will normally be drawn from one state with only Western States being represented. The regiments will be numbered regardless of where the matching historical unit served. The scheme will mix seniority based on when they were painted with their brigade number.

For example, the first Confederate brigade is made up of the Airfix figures I painted 30 years ago supplemented by a few more to raise one of the 15 man units to two 16 man ones. Having noticed that General Winfield Featherstone commanded a brigade of Mississippeans under Loring in the Vicksburg and Atlanta campaigns, he seemed to be just the man for the Airfix Brigade. The 4 regiments therefore are the 11th, 12th, 13th and 14th Mississippi. The 3rd Brigade will be from Alabama and will thus be the 31st, 32nd, 33rd and eventually 34th Alabama.  Thus the units will be bogus but will sound plausible and be easy to figure out and remember.