Zulus and the ACW 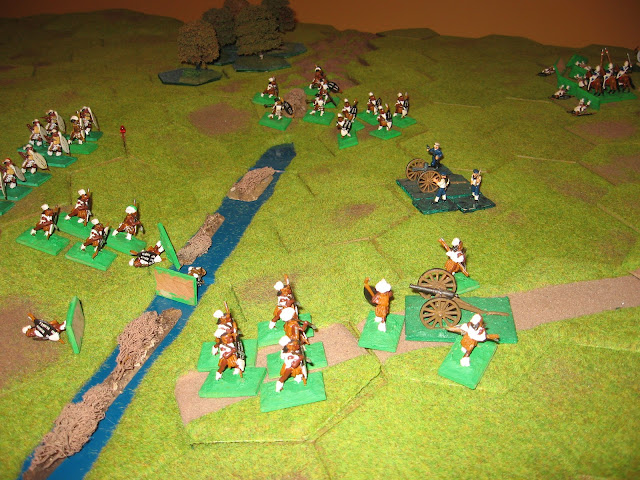 The Zulus over run a field gun in the center. The situation is critical.
Its not easy to see but the nearly dry river bed is 2 hexon tiles deep.
Ron's Ral Partha Colonial figures and Hexon terrain

The Zulus and the ACW  aren't often linked but last Thursday I played my 3rd Colonial game using Battlecry. It still amazes me that the rules worked and that the game was so much fun. Upon reflection, I think the ease of translation is in part due to the level of abstraction in the game and the way in concentrates on basics not chrome. So, yes the Martini-Henry was a more efficient weapon than an Enfield or Springfield muzzle loading rifled musket but the tactics of an army of horse, foot and guns armed with one or the other weapon would differ in detail rather than principle. As for the poor Zulu's whose limited firepower is being ignored by us, their tactics are determined by their numbers and vulnerability. It requires no special game rules to make it best for them to mass behind cover, try to draw out the enemy by probing and feint attacks and then over whelm any weak spots. 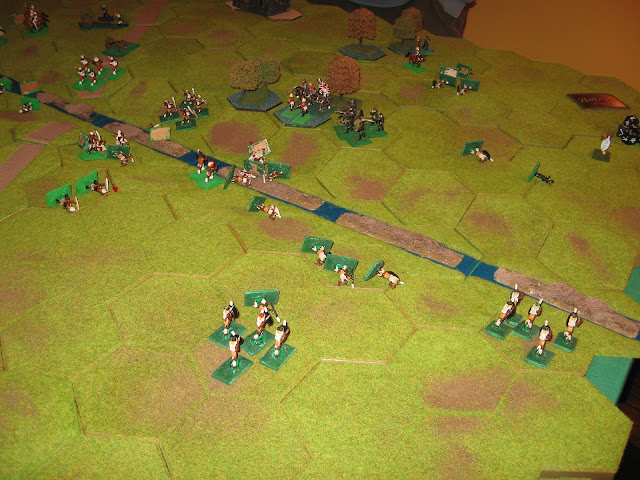 Despite local successes that almost overwhelmed the British, no target farms were over run before heavy casualties broke the Zulu morale.

One of the interesting Tweaks required to deal with the large number of Zulus was how to determine  victory conditions given that the Zulus start with twice as many units. In this scenario the book called for 12  units against 9 which became 24 vs 9 (gulp). The British break point was set at the loss of 5 units with each of the farms being worth 1 unit if captured, the Zulu loss was set at double this since they had double the units. On his blog DC has questioned the use of a fixed break point.  My own view is that since the game is so abstract and we have no idea what a "hit" represents and since the combat results are so random that the amount of firepower that an army can withstand can not be reliably predicted, then the break point is not actually fixed. An additional test or moving target could be seen as a form of double jeopardy where one mechanism  counters the result of another. But that is just one gamer's opinion.

One last byproduct of the game. I have been considering whether to continue to use 3 stand ACW units or 4 stand ones. After my last post, I found myself contemplating how many figures (480 infantry alone) I will have to paint to bring my armies up to 32 regiments aside even with 3 stand units and how long this is likely to take (5+ years at the rate I have been adding ACW) You would think that this would encourage me to avoid the 4 stand option but in fact it has made a mid-point of 16 x 4 stand regiments a side an attractive option. Once I realized that this would make the armies Battlecry compatible, that cinched the matter. After regrouping where it looked right, 4 of my  Reb units will need a stand added and one of these is now done. Work on flags is in progress. That'll bring me back to 10 so 6 new units are needed to get to the goal for next year.

The question of flags raises another interesting topic. If I were recreating a particular battle, I would want the right units with the right number of men in each dressed in the right uniforms and carrying the right flags but I am doing a generic wargame army.  My current interest is in the early campaigns in the west but my instinct is to use the well known Battleflag, often wrongly called the Stars & Bars. In the west however, this was not widely carried until late in the war. Instead each of the various "armies" which came and went seemed to have its own special flags.

So, do I do generic units with bare flag poles and  give them a different flag and name for each game as some historical gamers suggest or do I pick an identity  for each unit but equip them as pleases me so that the battlefield will present the picture in my head? Well, for me, I may want to recreate various battles or parts of battles but mostly this is just  game  and I am willing to use the wrong units in a refight. Now that the organization question is settled, I can get serious about giving names to the units and commanders and I just may use flags as  a way to help tell my brigades apart.