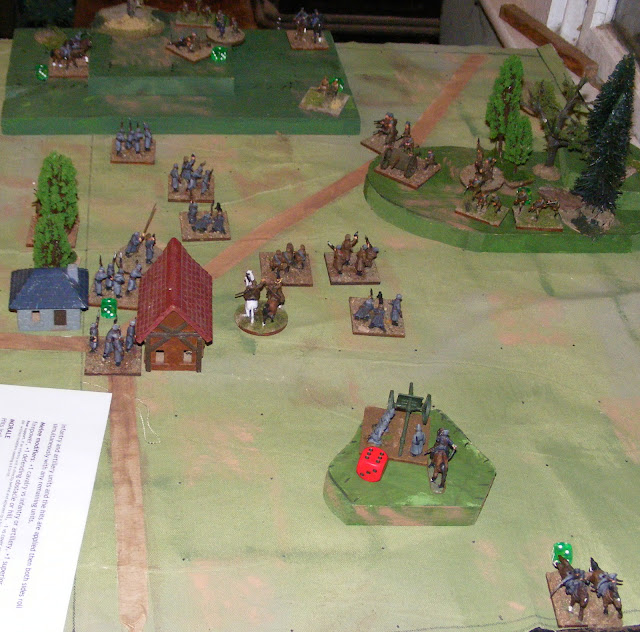 This game was a refight of the same Holding Action game as the BBPW game fought on Sunday. The only change in order of a battle was the addiiton of 1 White and 2 Red Infantry battalion commanders.

Forgoing an attempt to charge the guns this time, Red deployed cavalry to both flanks and brought up his infantry as quickly as possible. Given a string of dismal order dice, this wasn't as quickly as  desired, especially given the brisk enemy artillery fire but there was some long range fire by infantry and dismounted cavalry to distract the enemy and at last all was in place.


Eventually the Red cavalry on the right lost the firefight and were routed  The infantry in the center was repulsed, largely due to MG and artillery fire. An attack by Red's mounted cavalry on the left was also repulsed and there was a pause while Red rallied units. 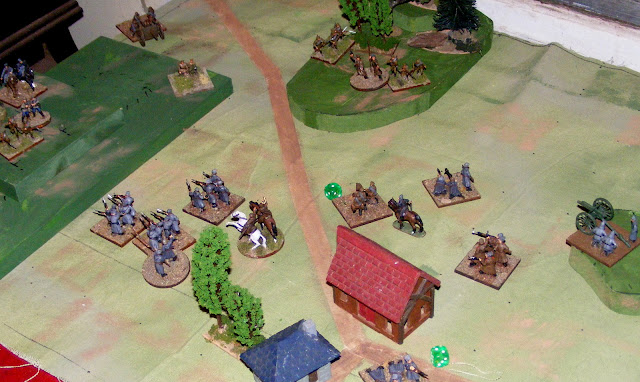 While the Reds rallied, a concentration of Red artillery and MG fire silenced the White battery and drove them from the field then routed a unit of infantry, suddenly evening things up. Taking advantage of  this Red attacked again. This time the cavalry drove in the first line but White's cavalry counter attacked routing them while their infantry rallied in the woods.


At last Red's infantry was back up on line and launched a final assault. It was nip and tuck with the White commander and the Red infantry 1st Infantry Battalion commander both falling in the fray.  White's force was beginning to waver (exactly 50% losses) but Red was also in poor shape (1 less than 50%losses). In fact I had miscounted at the time and thought White was broken until I looked at the pictures. However, while I hadn't tracked the number of turns played, it seemed like a lot and the game had gone on about 1.5 hours. The attackers goal was to break through the pass with a substantial force before dark. If the defenders is forced to retreat but the attacker is unable to continue his pursuit due to losses or lack of daylight then the game is a draw. I decided in the situation, since it has not been an actual break and that Red was on his third attack when the scenario specifies that speed is of the essence, to declare that night had fallen and that the game was effectively a draw with the Whites being shattered by losses but the Reds being too disorganized to continue in the dark. .. 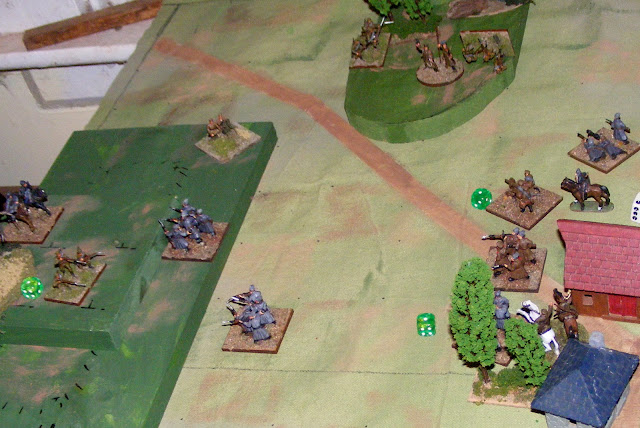 I was afraid that having 1 stand units would lead to the game being over too quickly but that wasn't the case and I am now thinking seriously about trying the full size game rolling per unit and using stand removal to mark hits. The two are not exactly the same, rolling fewer dice and being able to take fewer hits more or less balances out for infantry fire although rolling 2 hits  in 2 turns rolling 1 die is the equivalent of rolling 6 hits in 2 turns rolling 3 dice. Possible but much less likely so in effect the odds change. Artillery fire however, becomes much more deadly since it can break a unit in 1 turn, in effect each gun is the equivalent of a 2 gun battalion in HofT. But that's a balance in how many guns to deploy. For a few moments I considered increasing the number of hits that units could take or reducing numbers of artillery  dice but the game had a good pace and reasonable dice and I'm not sure that prolonging things would help, especially if I am fielding 30 unit ACW armies. Rolling fewer dice and not needing any markers is a big plus for going that route.

The big difference between the games turned out to be the obvious ones affecting ranges and melee distance, this is the grouping of inches into areas. The original HofT kept Morschauser's 3" melee zone and a single range band for shooting. In effect, thought not stated explicitly, melee was close range fire as well as charges while fire was long/medium range and that is how I treated it. When I went to making melee only upon contact I had to introduce close and long range bands for shooting to satisfy myself. This became an issue when translating to squares and initially I decided to go back to the single shooting range approach but wanted to stay as close to HofT as possible and there were issues early on since I wanted to use the same core rules for the ACW where there were still some smoothbore muskets in use.  Since each square is the equivalent of 6" on the table and the long range for muskets is 6", short range 3" and melee distance is now effectively 6", you can se the problem. One approach as used in the land of Wine & Cheese is to lump all musket fire and combat into one combat mechanism. I tried that with my early conversion of the Portable Wargame to the War of 1812 and wasn't happy with the result as it didn't differentiate between the sometimes protracted long range firefights seen in that war and the usually shorter more decisive close range fights but that war was largely composed of very small actions and for larger battles of the era I would probably go with the single combat mechanism as well. I did consider having melee happen when units attempt to enter an enemy square so that 1 square firefights could still take place but Ron and I tried that when we converted Impetus to hexes and it quickly got confusing since 2 of our units would not physically fit in a hex. I elected to lengthen the ranges and retain a -1 for firing at long range.   This was fine till I hit the diagonal issue.

The issue of measuring range along the diagonal complicated things regardless of which way it is treated. For example, a unit facing the diagonal firing at a unit which is 2 areas away is firing at the closest possible target but it counts as 4 squares if counting orthogonally, 3 if counting diagonals as 1.5 or 2 if counting ares directly. With 2" squares, the actual distance to the front of the target square is the same distance as firing at the back of a target square 2 squares away orthogonally. However when artillery is considered, firing out 10 diagonals is the equivalent of 12 orthogonals in actual distance. For infantry with a range of 2 it means fire along a diagonal is impossible even if it is straight ahead. One thing was very clear by 1/2 way through the game, counted the diagonals as 1.5 might have been more accurate but it was a pain in the patute, normally it made no  difference and it effectively meant rounding down for most of the distances which are short. Rounding up would solve that but make it effectively a non-issue involving effort. Next time, I'll ignore the diagonal issue  and see if everything goes sideways, if so I'll reconsider my options.

The penalty for over 1/2 range also needs adjusting to indicate that units need to round up. So a unit with a range of 3 gets a -1 at 3 squares, no modifier at 2 squares and is in close combat at 1 square. It has occurred to me that the penalty may be unnecessary fiddliness and it wouldn't really hurt to drop it and go back to 1 shooting band and 1 close combat band. For smoothbore artillery this would mean having a cannister range with 2 dice and a shot/shell range with 1 die.

I'm already looking forward to the next game.