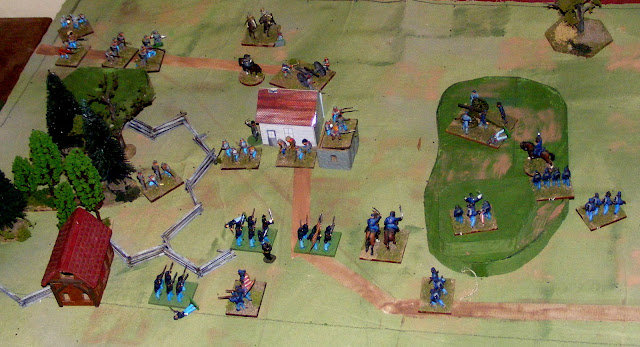 The scene mid game, about Turn 5. Single figures are being used as casualty markers.

The scenario played last night was Chance Encounter from Scenarios for Wargamers, aka Sawmill Village. This version of the scenario allows players to choose 6 units from a list. Partly to increase the size of the game to make it worthwhile under these rules and partly because the guidelines indicate that infantry units should be twice as large as cavalry and light infantry, I allowed 2 regiments for each "unit" of infantry taken. Both sides opted for 1 cavalry, 1 artillery and 4 infantry (8 regiments) divided into 2 brigades. Once again, playing the small version felt just like playing the full table version. I thought this was good till I found myself thinking troubling thoughts this morning but more on that later.

By accident, the town in the middle was 1 square too far away to be occupied on the 3rd move so there was a clash of horsemen in the center of town which resulted in both sides falling back. The Federal commander opted to send one brigade straight up the road and the other with the battery up over the hill. General Kinch in charge of the Confederate forces deployed his first brigade with its left on the town supported by the battery and cavalry forming a refused flank. The 2nd brigade was sent through the woods.

After a brisk exchange of fire, the leading elements of the Federal army were driven back and the Rebs occupied the town. A second, concerted attack  took 1/2 the town but the Yankee battery was silenced and over whelming fire from the Reb 2nd brigade coming around the flank destroyed the Yankee first brigade. A final push took back control of the town and forced a precipitate Federal retreat. 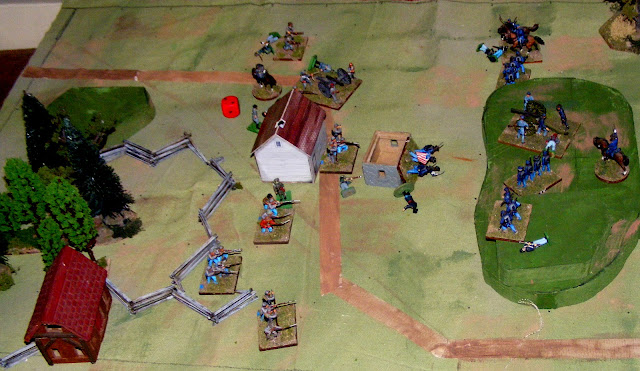 Johnny Reb sweeps the field.
On the whole, I liked this version of the rules better than the previous one. I have always liked rules which adjust the total possible hits as well as the average but with most of my systems, unless you got into rounding and carrying fractions as in Charge! or used a look up chart, it was hard to arrange. Increasing the dice per stand has allowed me to play with the number of dice but of course that increases the possible total upwards when there are no unfavorable modifiers. In the event, I had put the computer away before setting up the game and then discovered that I didn't have a printed copy. Rather than dig it out again and I decided that I could remember them well enough and largely I did but I made an error and used 3 dice per infantry stand instead of 2. This made the fire and combat more deadly than envisaged and shortened the game, being the rules equivalent of rating them all as being armed with breach loaders, but it was still a satisfying if bloody game.  I was especially pleased with the way the voluntary retreat worked vs the rout and rally system and I expect to see that ported in some fashion  into HofT as well as Gathering of Hosts.  I'm particularly pleased that it looks like it will allow me to use the same combat and morale  mechanisms in HofT without giving up multi-element units. I will have to experiment to decide if more dice and more hit points improve the game or make it drag.  Since I found that the grid offered no real advantages over measuring in cm, it actually looks like HofT could be used for both full and card table games.

One unrelated issue was the Order dice, they are too generous and something like HofT where only 1 order die per division or maybe per side is rolled but where entire formations are activated might be more in order. However, I found myself thinking again about how troops are actually controlled which led me back to thoughts of persistent written orders vs dice.

That's where the dangerous thoughts came in. I was playing around with a bunch of the single ACW figures from Rob's donation and determined that I could easily fit 6 or even 12 figures per 60mm square and be able to use stand removal for hits or use a system such as Mr Kinch's where officers are used to track hits. I have extra figures so this would allow me to play Teasers exactly the same as I would upstairs but with perhaps 1/2 the figures. Ummhhhh wait a minute, good for campaigns maybe but that wasn't the idea. I didn't set out to find a way to duplicate my ACW project in 2 modes in the same scale! If I can play games with 200 figures on the table, sitting down, why would I need to field 500 upstairs? What had been in my mind was a chance for various side projects to come out. Things like the RCW, WWI Colnial, Boer War, even 54mm toy soldier games with a token 4 figures per square. Something other than my main projects. It also occurred to me that cm HofT and a game with written game orders is a long way from a board game suitable to introduce non-wargamers to my hobby which was one of my goals for this year.

Since nothing stops me from using existing stands of ACW  troops for the occasional card table game whether gridded or using cm and HofT, and since I am not ready to give up my main table and convert the games room to a guest bedroom or something, I am going to put the ACW figures away again for a bit to avoid the distraction and confusion. I am also going to ditch the diagonal moves as the freedom clouds the issues and makes the game feel less like a game. In any event, I think its time to work on a permanent, flocked board since I see one or 2 games a week being played downstairs  over the winter.