My first thought was that it's been a long time since I put that many units/figures on a table. Discounting club NQSYW convention games that I have been part of that is.  Last time I can remember would have been when we had just bought this old farmhouse and I had it pretty much to myself for a year or two and had some of the lads over for a gaming weekend.

The year was 2005, the table was a hastily erected 6 x 9 with 4 foot legs, the troops were 15mm French Revolution (a mix of RAFM, Battle Honours, Minifigs and Old Glory) and the rules were Morschauser Meets MacDuff, the early version of Hearts of Tin. The 4 foot high table made the troops easy to see but there was much hilarity amongst my guests when it turned out I needed to step up onto a stool  if I wanted to reach the middle.

The cloth as you can see is the same. Without poking through the archives I think there were 6 or 7 of us with Austrian, Russian, Hessian and Emigre troops taking on the French. It was the first 15mm game I had played in about 10 years and most of my scenery had disappeared but there was enough to get by. 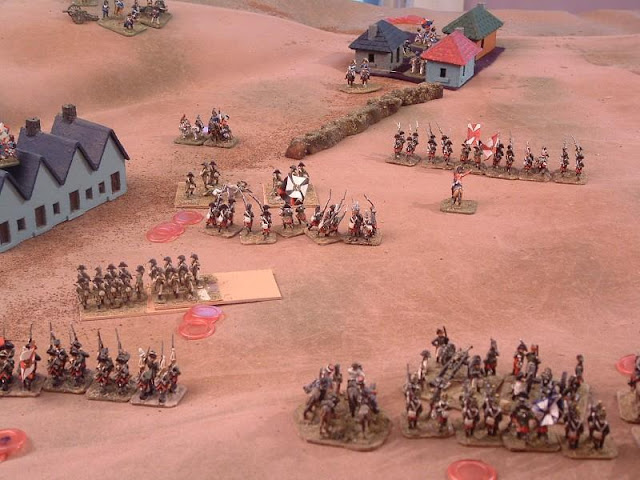 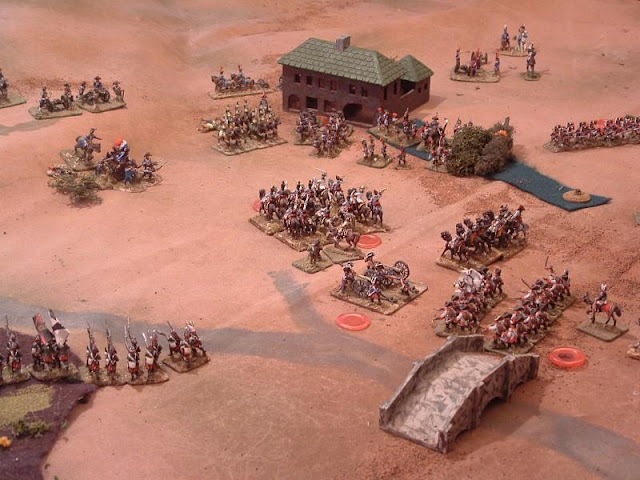 All of the FRW 15's including the Turks, Vendeans, Haitians, British, French, Austrians, Russians and Emigres are gone now and my ability to field much more than a skirmish went with them. There had been a plan to build a 40mm mid-19thC equivalent with smaller units and vague thoughts of a 6'x10' or larger table but that has proved to be impractical in the foreseeable future. I don't feel the urge to play a large-ish game every time but its nice to have the option so apart from everything else I'm pleased that the game worked and that the contributions of troops have got me there a year or two sooner than I expected.

Once last shot of the room seven years ago though this was a 40mm War of 1812 game a few months later. 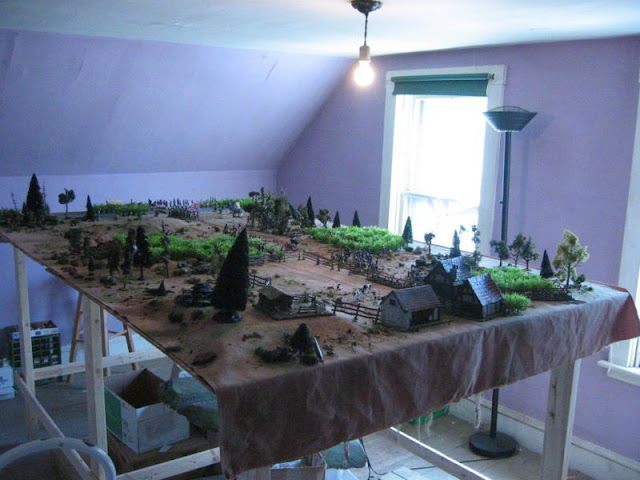 2006. Nice purple eh? No pictures of the  holes in the plaster walls and  ceiling but that's ok.
The trim is still waiting for paint. Must add that to the list for this winter.

This was the size of game that I was envisaging for the rules so it was good to put them to the test and good to know that it wasn't a problem handling  30+ units per side. Having an opponent would have improved the game of course and there were enough troops that 2 players aside would have had enough to do and 3 could have been accommodated. I played somewhere between 13 and 15 turns (I was moving a marker on a ruler to track turns and twice absent mindedly picked it up to measure). The game did not use all of the painted figures that I had on hand, nor were Jerry's troops here and there are unpainted and partially painted figures on hand but it was close to as big as I would want to play and almost as big as the table would handle. If I'd been playing across the table in a pitched battle, I might have been able to squeeze on another small division but I'm not sure if it would have added anything but time.

The 3 stand bases worked really well as it was easy to see their status and with a flag for each regiment it would have been easy to track regiments, esp if the flags are consistent by brigade. Since I want to make use of more figures without increasing the number of regiments my thought of going back to an early plan of 6 figures per base is looking more and more attractive, especially for the new troops that need rebasing to fit in and avoid having smaller bases being an advantage in melee. I'm not planning to repaint any of the new figures which are quite nicely done with some good conversions and customizing but I am going to tone down the polished silver musket barrels, add a hint of shading to some and switch most of their ammunition pouches to the right hip. The result will look something like this x 24: 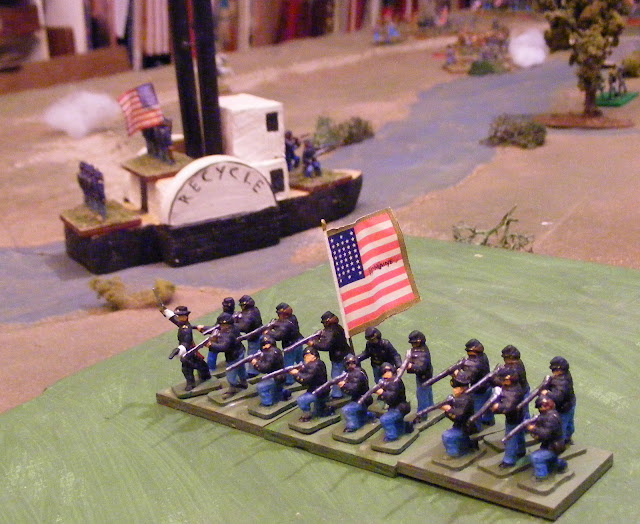 I haven't decided on a basing finish so for now I am just going to stick with paint until I get all of the new guys done and start in on the old ones. By then I should have made a decision on how my table will be finished.  The old cloth is useful but the drab brown and olive green is too depressing for winter  and if I should want to do bluffs over looking a river the cloth becomes awkward. (not to mention the pain of having a cloth overhanging the terrain storage drawers while setting up.)  As much as I like many OS aspects, I don't hanker after a plain green table but I do quite like the thought of a mottled table with hills and bases to match. Ideally I'd love to add some airbrushed graphic details but neither airbrush nor talent are available so I'll have to do some moderate experiment's with brushes this winter, once I decide on just the right shade of green.

Now that I have troops on hand, even if still under going re-org, flagging and re-basing, I can start thinking more about terrain and accessories, wagons, steam boats, fences, buildings and fortifications in particular. The steamboats will have to be bathtubbed, tall enough to not look too silly but with the smallest possible foot print, but I'm looking forward to some combined arms eventually

But I was going to talk about the rules. Apart from the 3 minor omissions in the draft I was using, they worked just as intended. There were tactical decisions to be made, skirmish? firefight? all out assault? but they were really division level decisions about risk, reward and mission. The dice affected the flow of the game and the possibilities of extreme results kept combat exciting but there were no all or nothing rolls aka rags to riches rolls where the game turned on a single throw and that was fine by me. It also took some time to play. Unfortunately I was subject to a constant need to attend to other duties and have no idea of how long I actually spent playing. it must have been between 4 and 5 hours of actual playing time when all was said and done. About my limit for an occasional big game. The turns supposedly represent between 15 and 30 minutes on average so that accords well between game time and playing time which has always been a goal. It also feels reasonable  historically though I haven't gone digging for examples to compare to.

So next? I want to spend a little more time painting and there is supposed to be a Battlecry in the Soudan game later this week but there will doubtless be another home game sometime this week.A test of the new draft of the big portable game perhaps? Ancients possibly? or a 40'mm skirmish?   Time and whim will tell.